At last, the circle is now complete and Trilogy fans can rejoice in the long-anticipated, highly controversial Blu-ray versions of the complete Star Wars saga.

Before I tackle this review, I want to state that I refuse to analyze or critique Lucas and his reasons for altering the films. Prior to watching these, I found far too much hatemongering online toward the man who gave us Yoda, Darth Vader and the Millennium Falcon.

That being stated, you will also not find a fanboy gushing for Mr. Lucas; I am a fan, but I’m also a writer and critic doing his absolute best to give as objective a review of this collection as possible. And so… 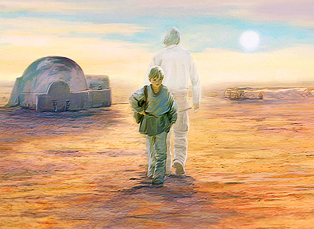 The first thing I noticed was the packaging. The original art and design of the box set is stunning and efficient. Assembled in a book-like fashion, the set has original art accompanying each of the nine discs. Every film has a two-page layout depicting a scene in

an original oil painting. It’s aesthetically some of the best packaging I have ever seen. I am relieved to say that this attention to detail thankfully carries throughout the many aspects of the collection.

I opted to watch the films in chronological order, beginning with The Phantom Menace. I noticed immediately that the color timing of the film had been fixed. The awful picture quality and overall orange hue on the last DVD release is gone. The sound is fantastic, a running theme through all of the films. Ben Burtt’s sound design and John Williams’ score are crystal clear and well-balanced; this collection will become the benchmark to test any surround sound system.

The chase scene in Attack of the Clones between Obi-Wan and the Fetts will really put your sound system through the wringer; I highly recommend trying it out if you have the setup.

The prequel trilogy looks better than it did in theaters. The addition of a digital Yoda (one of the new changes to Phantom Menace) doesn’t look out of place or clumsy. The improvements, though extremely welcome, do not make these perfect transfers of the films. Phantom Menace is very heavy-handed on the digital scrubbing; the movie was shot on analog film but made to appear as if it was shot digitally like its two sequels. While the colors are outstanding, the over-scrub often removes detail in some scenes and causes contrast-related issues in others.

Clones and Sith do not suffer from these woes, but they do have some dialogue-heavy scenes that are occasionally buried by the sound effects or score.

Patton Oswalt Reacts to DC/Nielsen Contract, Panders to Own Cliche