If you’ve ever been to the original Star Tours at Disney World, then you probably know many if not all of the lines. So when it was announced that Star Tours was being changed, I knew I’d really miss the old ride. Call us sentimental old fools, but my friend and I will probably always run around yelling the lines at each other.

At first, I was hesitant and curious about the change. I’d practically grown up on Star Tours – my favorite ride and here they were changing it. Thanks, George Lucas. You already created the travesty of the new trilogy (and Jar Jar Binks – do not get me started) and now you’re destroying the rest of my Star Wars childhood. Okay. You have the money so you clearly win.

First came the rumors: lots of new destinations – really cool places we as fans had always been rather curious about. Among them was Alderaan, which I had always wondered about – why didn’t they have any weapons? Were they like post-WWII Japan and under political sanctions? It’s neither here nor there. Bespin was another proposed destination. We saw it for an hour in the best movie of the entire series. It was the planet that contained one of the smoothest characters to grace the series (Han was cool – Lando was smooth). As a girl, every time Lando offers Leia a spot among the clouds, I melt. I guess I’m a sucker. I would have considered it. Okay, these places seemed pretty cool.

Then came the rumor of the bane of any ride’s existence: 3D glasses. Seriously, on a ride that’s supposed to simulate the experience of being in an airport and taking an actual tour? You’re really going to ruin it with 3D glasses?

My friend and I went in cold. We did not even glimpse rumors other than what I had read earlier. I didn’t actively seek the rumors, and as a very big stickler for this I cannot go any further in this without the following: 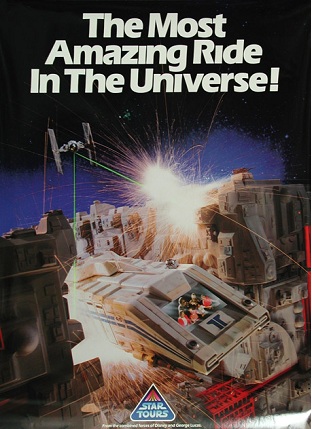 Okay, now that that’s over, here’s to it. The queue wasn’t different at all. Understandable as they only had a few months to complete the project and couldn’t give it a total in-and-out overhaul. The outside queue is a fun, rather quirky twist through an Ewok village. You half expect them to pop out until you remember that Ewoks are only native to California, not Florida. Once inside (thank the Force for air conditioning), you see C-3P0 and R2-D2 working on the new Starspeeder and a large screen which gives you the arrival and departure gates in English and Aurebesh (yeah, yeah, I can read it – don’t give me that look, you can too!), weather reports for various destinations and commercials for the new and improved Star Tours. If you lost concentration for a moment, you might actually think you were in the security line at the airport.

Then comes the actual ride.

The ride is completely worth the wait for any Star Wars fan. It is fun, authentically Star Wars and makes you really feel like you’re a part of the Rebel Alliance (and a traitor – take her away!) You do, however, need to be a little flexible with the timeline. According to Wikipedia, the

timeline is somewhere between Episode III and Episode IV, but any fan (not just the crazy ones) can clearly see the timeline hiccoughs. As long as you’re not a complete jerk about chronology (and trust me, I usually am – this was the exception), then you will have a blast and have total nerd-gasms from the sheer awesomeness. There are, from Wikipedia’s count, 54 possible scenarios.

The preshow movie is where we set up the plot. It is computer-animated, but the quality well surpasses The Clone Wars series (leaving my friend and me wondering why the series couldn’t have been done that way). In a maintenance hangar, C-3P0 (voiced by Anthony Daniels) approaches the speeder and chats with R2-D2 for a moment before entering and shooing away the captain droid. Then we get the safety warning and start boarding.

Once you’re seated and have completed all the safety checks, the tower clears you for launch. That’s when it hits you: Holy crap, C-3P0 is still in the captain’s seat! He protests the tower, but they override him, and the passengers are helpless in all of this. That’s when the ride starts to vary.

It is fun, authentically Star Wars and makes you really feel like you’re a part of the Rebel Alliance.

Invariably, the passengers are informed (by either Storm Troopers or Darth Vader himself) that there is a Rebel spy aboard the ship (they show you a wanted poster with a picture of someone who is actually in your vehicle), and the Empire is seeking their immediate capture. Your ship escapes the hangar, jumping to lightspeed with the help of R2-D2 as C-3P0 basically cries over the controls.

You emerge from hyperspace to a planet and ride through it, avoiding the Empire at every turn. My favorite was the Battle of Hoth, which scared the crap out of me the first time. My friend and I only missed one variation of this stage. That was Tatooine, which my sister tells me she loved.

Once you’re out of the planet’s atmosphere, you get a transmission. It’s delivered by one of three characters who tells you about the spy and begs you to deliver them safely to the Rebel base. If you’re lucky enough to get Princess Leia, note that this is actually archival footage with a new voice recording by Carrie Fisher. C-3P0 suddenly grows some balls and off we go – impressed – into the Rebellion.

This last sequence has three possibilities, all of which we saw. My favorite took place on the Death Star as it orbited Geonosis. Not only did it feature Darth Vader, it also had Boba Fett and the Emperor if you looked quickly enough. Darth Vader was voiced by James Earl Jones, and Fett was voiced by Temuera Morrison, who played Jango Fett and all the clones in the prequel trilogy.

Seriously, does George Lucas actually own these people?

Alas, I later found that to my dismay, Alderaan and Bespin were not included in the new ride (which made everyone I spoke to a little annoyed). Everyone I was with wanted to see Tatooine, but frankly, as it was in five out of six movies, I’m over Tatooine. The final tally of planets included is the following: Hoth, Kashyyyk, Tatooine, Geonosis/Death Star, Coruscant, and Naboo. I would go through every single scenario in great detail if space permitted me.

As for the 3D glasses, I’ll be completely honest here: I didn’t even notice them. I hate hate hate 3D glasses, and I forgot I had them on. I did, at one point, take them off to see what it looked like and it wasn’t possible to see. The crew calls them “flight glasses” and once I put them on, they didn’t detract from the experience at all. If anything, they made the ride more authentic and much more fun. There were times in the ride that I actually flinched and twitched, even though I was conscious that I was on a ride and watching a movie.

I went on it ten times. I would go on it a hundred more. It’s a great ride and even though I miss the last Star Tours (and its spastic pilot), I’ll get over it because there’s something great in its place. I would recommend this ride to everyone. Oh, and I was never picked to be the Rebel spy, so clearly I have to keep riding it until that happens.

May These Blu-rays Be With You: Star Wars Blu-ray Box Set Reviewed
Previous Post