It may be presumptuous of me to say, but Drive is possibly the best-directed, most reverent movie I’ve seen all year.

I didn’t know what to expect going into this film – my prior exposure had been limited to only a few photos of star Ryan Gosling assuming a Steve McQueen/early ’80s Emilio Estevez pose. The reviews are excellent, and the film received a favorable response at this past Cannes Film Festival.

All I can say is that if you’re a fan of ’70s/’80s genre movies, synth soundtracks that recall John Carpenter and Goblin, movies about dudes and cars, modern noir, heist movies, mob movies, Grand Theft Auto: Vice City and a healthy amount of gore and violence, then you need to put this movie at the top of your must-see list.

Ryan Gosling stars as the unnamed main character, referred to in the credits only as Driver. He is joined by a superb cast that includes Bryan Cranston, Albert Brooks (playing against type as reluctantly villainous Bernie), Ron Perlman, Carey Mulligan and Christina Hendricks. The trailers I have subsequently seen paint this as a heist movie, but at its core it’s a celebration of genre films of days gone by, while also standing as a unique film on its own.

The films opens on the getaway portion of Driver’s life. As the ominous synth soundtrack and police band crackle in the background, we see that he is waiting on two robbers that he’s going to ferry to safety. The tension is thick, and when the trio takes off it’s obvious that Driver is the man for the job, as he eludes the police at every turn by using the cover of the Los Angeles night as his shield. He rarely talks – he just drives. The opening credit sequence, reminiscent of the one from Risky Business, offers a hint of what’s in store for us.

What’s fascinating is that we are never given much insight into Driver’s past, mainly because he says so little. His motivation is essentially that he is an adrenaline junkie, as we also see that he is a Hollywood stunt driver. He may also have a career as a stock car driver ahead of him – his boss at the auto shop, Shannon (Cranston), is trying to find financial sponsorship to get a team off the ground. This is where the potentially mobbed up Bernie and Nino (Perlman) step in.

It isn’t until we see Driver’s home life that a more specific motivation becomes apparent in the form of his neighbor Irene (Mulligan) and her son Benicio. Irene’s husband is in prison, and during this time

Driver acts as a protector of sorts for them. Since he lives a loner’s life in his spare apartment, his neighbors’ plight acts as a calling and possibly a way out for him. It could be inferred that this solitary existence is what led to his life of risk-taking and crime, and it’s not until he meets Irene and Benicio that he realizes that maybe there’s another way.

Unfortunately, plans have been set in motion and Driver‘s trapped on the path he’s chosen. Matters are only complicated more by Irene’s husband, Standard, returning home from prison. 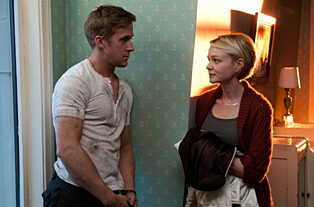 There are scenes where the songs in the soundtrack offer a window into his mind, specifically the retro cheese track, “A Real Hero,” by College. As I’ve mentioned before in my soundtrack reviews, an example of a great film soundtrack is one that becomes symbiotic with the film, where one cannot exist without the other without losing its impact and power.

Director Nicolas Winding Refn has been playing around with genre films since his 1996 debut Pusher, but with this film he found his muse in the seedy underbelly of Los Angeles. Although this movie takes place in the present, the ghosts of 30-plus years of Hollywood and genre films whisk around each scene and color every detail.

With every genre convention that pops up, though, something totally new also comes along and takes its place. Many retro genre films have emerged in the last ten years, so it’s refreshing to see that there are new and exciting ways to play with it.

Watching Drive, I was brought back to the first times I saw Repo Man, Assault on Precinct 13, Bullitt, Taxi Driver, The Wraith and a little bit of that year I spent playing Grand Theft Auto: Vice City. Just as I was lost in Vice City, so too did I get lost in the world of Drive.