With the rise of superhero films in the West, the East longs to join in on the fun, so we get movies like The Red Eagle, a Thai action movie released in 2010. It’s a modern update of a series of films from the late 1950’s up to 1970 (in which the main actor Mitr Chaibancha died during the filming of the final scene) based on Sake Dusit’s Insee Daeng (Red Eagle) series of novels. A true pulp screen hero, The Red Eagle is the vigilante alter-ego of alcoholic detective, Rom Ritthikrai, though in the modern version he is addicted to morphine. This remake seems to be more Punisher meets Batman, with a lot more swordplay and Jason Todd fashion sense. 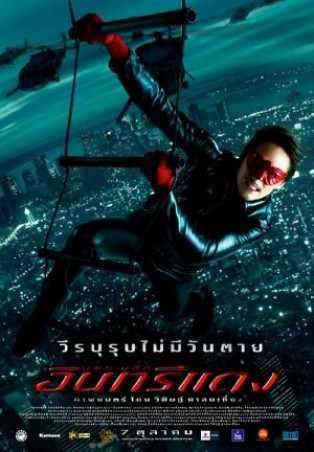 What I love about Asian Cinema, particularly the Thai film industry at the moment, is that anything goes. In order to stay competitive they are taking a lot of risks and putting out ridiculous, over-the-top movies. The Red Eagle is the second superhero movie to come out of Thailand in the last few years, with 2006’s Mercury Man being their Spider-Man influenced film, and the soon to come out Mantera following the Iron Man/Transformers

lead. Not that these movies are ripoffs, but rather you can see the influence of Hollywood’s superhero films and the best part is they can play around with it more, take more chances and deliver something that you have never seen before.

They have motorcycle sword fighting and rooftop chases, the likes of which has only been seen in comics. But script-wise the movie is all over the place. The flashbacks and reveals are slap-dashed throughout and we never really get a sense of who we are supposed to be following throughout the film. Should we follow the hero whom we don’t get to see until a good chunk in, the young cop who is responsible for taking him down or the ex-fiancee of the Prime Minister who is fighting to stop a nuclear power plant from being built? The plot is a mess of politics, love triangles, aimless character development, and a whole bunch of savage, brutal fighting. Gunshots abound and bad guys are decapitated, while all injuries are attended to in their hideout.

It delivers as a superhero movie, doing some fun stuff with a killer vigilante. The brutality of the kills is in direct proportion to the monstrously corrupt politicians and gangsters who are the very clear villains of the tale. The action is all very solid but never as breathtaking or as daring at it would seem. Eventually, the plot is introduced but drags on endlessly through the second act leading me to only look up and take notice when the action cuts in, but then there’s so much thrown in suddenly that it is hard to figure out what is going on with who. It’s fun, and definitely a huge step forward from Mercury Man, which was overly ambitious but fell very short of the mark.

One of the better made films from Thailand, with a nice slick look, it’s nice to see the quality of film-making getting stepped up a bit. It’s fun to see new superhero characters come to life via the silver screen though, so as long as Thailand keeps making them, I’ll keep watching.

I find it odd that they end the film with a random clip of The Red Eagle clinging to a rope ladder hanging from a helicopter, which is the way that the original actor in the series died while filming. Bad taste or honoring his memory?