Back in 1984, an idea was born from the minds of Kevin Eastman and Peter Laird that subsequently became a global phenomenon known as the Teenage Mutant Ninja Turtles.

The Turtles have appeared in comics, videogames, movies and television, and their recognizable masked mugs have branded everything from bed sheets to tasty fruit pies. The TMNT property has brought us a slew of characters since its inception, but only a small few remain true to their beginnings and have had a lasting effect on fans. One of those characters is Casey Jones.

A character from the origins of the TMNT comic back in 1985, Casey was known as a street kid who was tired of his town being overrun with hoods and his home being terrorized by local gangs. He trains himself in martial arts, and with a variety of weapons (such as bats and golf clubs), he becomes a homemade hockey mask-wearing vigilante and begins cleaning up the streets.

Casey has been a fan favorite since the beginning and has appeared in every single variation of the TMNT story. He mixes with the Turtles on multiple occasions throughout the comic and on the big screen in the 1990 movie, where he has a skirmish with Raphael in Central Park. But until now, his story, in his own words, had never been told.

When I heard about the Casey Jones movie, I went home, made dinner and hopped in my best seat. Half of me was eager to revisit one of my most beloved comic heroes and the other was ready for a steaming pile of failure. Ultimately, I got a little of both – but I was entertained. 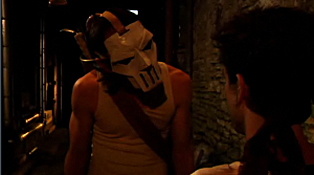 It’s apparent that director Polaris Banks has been influenced by most of the incarnations of the Turtles. What mainly shows through is a combination of early Turtles grit with sprinkles of the cartoon series charm and a look that is representative of the original live action movie.

I knew going in that the acting was going to be trying and I was right – the actor playing Jones is a bit over the top (and underweight) but is entertaining nonetheless.

On the other hand, I was happy to see some violence brought back to the story. If we look back at the original series, the Turtles and Jones did use their weapons and blood did spill. Jones’ rough and tough character helped sell the movie, as he isn’t afraid to break a nose or two.

You can tell the director grew up with the series by the simple nods to the comic and cartoon. April wears a yellow cargo jumpsuit, the Foot Clan look like the Foot Clan and there are some special appearances that had me feeling like a 9-year-old all over again.

There are few independent movies about comic book heroes that actually get it right. My favorite, Batman: Dead End, is an epic short about another favorite comic hero from my childhood as he battles with the Predator. Casey Jones is nowhere near that level, but it comes the closest to representing the character, as we knew him best, in the comics.

Check out the movie at: Caseyjonesthemovie.com