In a world where geek culture is becoming ever more pervasive, where videogames sell millions of copies and comic books get adapted into blockbuster movies, there still remains one hobby that rides along the edges. There is still one hobby that is shunned by the mainstream. Join me now as we explore the world of tabletop role-playing games. Join me, the TABLETOP WIZARD!

Now that we have a good idea about what I mean by tabletop role-playing, let’s delve into some of the many ways you can play a tabletop RPG. Again, when I say RPG from here on out, I’m solely discussing tabletop games.

By far the easiest and most accessible way to get into RPGs is through Dungeons & Dragons. It’s arguably the oldest and most successful iteration, and certainly has the most mainstream exposure. My first experience with D&D was waaaaay back in 1983; I was about seven years old and I loved anything to do with monsters or weirdness or dragons in it.

I’m not sure if kids still do this nowadays, but we used to be able to sign up to sell stuff to raise money for our school, and if we sold enough stuff we’d get prizes that we’d pick out of a prize book. I don’t remember the specifics well enough to get too in-depth about what we were actually selling, also considering that we (my brother and I) didn’t actually sell anything because we would just give the stuff to my parents and they’d force their coworkers to buy things. All I know is that at the end of the day, the D&D Basic Rules Set red box showed up at our house, and the great cracked bell in the ivy-choked tower rang out its chimes of doom, because I was hooked, and it was nigh the beginning of the end.

…and sometimes the mistakes that turn an ordinary person into something extraordinary.

I remember my father and my brother opening the box, flipping through the book, and realizing that this wasn’t a board game. This was something completely different. There were crazy uncolored dice in that box, with a little wax crayon that you had to rub onto the dice to see the numbers. I vaguely recall making an elf, I remember my dad trying to figure out how to play this strange game and clumsily walking us through the beginnings of an adventure. It didn’t go far, and I wasn’t to revisit the world of D&D until much later, but that magic red box, those weird dice and the pictures in the rulebook are all burned into my memory. I knew I wasn’t leaving D&D forever; I was just putting it aside for now.

Fast forward, we moved from Queens to Long Island and I found a group of like-minded dweebs who were into playing D&D; this, though, was not the magical red box of my youth. These gentlemen were using hardback player’s manuals and dungeon master’s guides.

This, my friends, was Advanced Dungeons & Dragons 2nd Edition! We played in realms called Greyhawk and Dragonlance; my wizard, Absu, braved the towers of High Sorcery to earn his purple robes, but was cursed with gold skin and black eyes!

Second Edition was a massive redesign of the system by TSR, and the goal was to differentiate modern D&D role-playing from its progenitor system – a miniatures

war-gaming system called Chainmail. Chainmail’s focus was on how the power of a fantasy hero – say a Gandalf or a Conan – could single-handedly turn the tide of a large-scale battle, while D&D focused on the day-by-day adventures that these heroes took part in. D&D explored the rise into heroism, the development of a hero, the choices one must make on the road, the feats…and sometimes the mistakes that turn an ordinary person into something extraordinary. 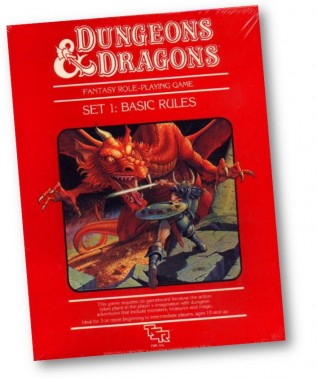 This incarnation placed more importance on the players’ imaginations, relying less on hex maps and miniatures and focusing more on skills, statistics and game mechanics for adventurous role-playing. In a bid to shed some of the negative reputation the game had garnered (read: Satanism), TSR scaled down the references to demons and devils and gave the game a more grounded and mythological feel.

There is one specific mechanic that came out of 2nd Edition that still, to this day, haunts my dreams. Every RPG has some kind of rating to determine armor; in D&D it’s called an Armor Class, or AC. In 2nd Edition there was a formula called THAC0, which stood for “To Hit Armor Class 0.” The higher your AC, the less armor a character was wearing. To hit a character you would subtract your THAC0 from your opponents’ AC, and if you rolled over it, you HIT! If you rolled a natural 20, you did double damage. Many a night, a group of adventurers huddled around a basement table, jittery off of caffeine and war, clutching multicolored polyhedrons, shaking and letting loose the clarion call of “What’s your THAC0?”

Subtract your THAC0 from Tim’s AC and get his Twitter feed @TimX13.