Apple’s announcement of iOS 5 included its foray into the cloud music world. While not the first ones out of the gate, iCloud holds a lot of promise, enough that other companies are working to beat them to the punch. $25 per year allows users to match their music collections with files already available in iTunes and download those songs to their iPods, iPhones or iPads, with a limit of 25,000 songs – iCloud sounds wonderful. Knowing this, how do the other services stack up?

The first of the competitors to make it out of the gate in the US was Amazon’s Cloud Player. Tied to the company’s cloud storage package, the player offers 5GB of storage, which can be expanded to 20GB, including unlimited music storage, with the purchase of an MP3 album from Amazon. In addition, Amazon MP3 purchases do not count against the storage limit. Music files can be played through the Cloud Player web page on Windows, Mac OS, Linux, and even the iPad, while Android users have the Amazon MP3 app to play through. Files are uploaded through an Adobe AIR application for Mac OS and Windows that can automatically parse an iTunes or Windows Media Player library, or upload files directly from the file system.

The player itself is straightforward, and separates locally stored files from files in the cloud. But cloud files are uploaded and streamed in their full quality. For people with limited data plans and high bitrate MP3 files, or even those who live in areas of spotty cell coverage, this could be an issue. In addition, the uploader will not allow files larger than 100MB to upload. There is also no way to edit the file metadata once the files are uploaded to Amazon’s servers, so you need to make sure that your files are accurately tagged, including the correct cover art (Amazon’s app doesn’t always match the correct art to the albums). 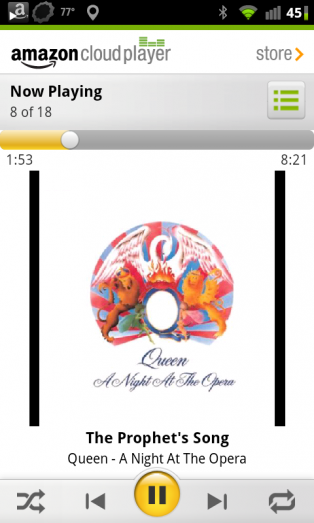 For folks with very large collections, Amazon’s unlimited storage is a godsend, but beyond that the best feature is the automatic storage of any Amazon MP3 Store purchases. If you tend to buy from Amazon rather than iTunes or rip your own CDs, this is the way to go. If not, there are better choices.

At its second annual I/O conference for Android developers, Google finally unveiled its long-discussed and long-awaited cloud music app: Music Beta by Google. Clearly, Google is hoping to change the way we listen to music, just as Gmail altered how we e-mail. But is there a chance that this could turn into another Google Wave, Buzz, or Latitude – a half-hearted attempt at bettering an established service? Short answer: too soon to tell.

Music Beta is made up of two components. The Android app (there is no iOS app) is freely available to all, and with its brushed-up visuals, it’s a decent replacement for the stock Android MP3 player by itself, especially on Honeycomb. But the bread and butter is the invitation-only web component, and unlike the beta launch of Gmail in 2004, Google was a bit stingy with their invitations to start. Case in point: I applied for an invitation about an hour before the official launch during the I/O keynote, and it took me eight days to get in. But the important thing is I was in, and was ready to start uploading music. The timing was nothing short of perfect, because my 4+-year-old 160GB iPod Classic had started its death throes, and if I could get all my music and my communication needs from a single device, so much the better for me.

Music Beta’s current library restrictions are limited only to total files rather than file size. While I’m not going to look the gift horse of 20,000 songs in the mouth, the truth is there’s probably nothing stopping me from ripping all my MP3s at the theoretical maximum bitrate of 320kbps. Nor, necessarily, is there anything stopping me from ripping a single CD as a single track. So clearly Google is being generous with space, while banking on the likelihood of most folks having low bitrate media files. Unfortunately, uploading your library isn’t a simple task, nor is it bug-free. In order to upload files to Music Beta, you need to install Google’s Music Manager. It’s a very basic program that will either take your existing iTunes library and upload it to Google or take files from various folders. Not being a heavy iTunes user, I opted to cherry-pick some folders from my large (and legal) MP3 collection. This apparently confused the hell out of Music Manager, causing it to freeze at inopportune times and leaving me with a partially uploaded collection. I opted instead to start over and create a new iTunes library and do my cherry-picking by importing only selected directories to iTunes. That was a much better call, as out of over 11,000 songs, Music Manager only completely choked on four. The Music Manager application offered no explanation as to why those files failed to upload; the only indication I had that anything was amiss was based on obsessive log-checking in the Mac OS Console (I’m a Unix guy at heart). Without any sort of useful troubleshooting information, it was almost impossible to figure out where the problem lay, and my only option was to re-rip the files from my CDs and re-import them into iTunes. If this service is going to be ready for prime time, Google needs more informative error messages

once this product is out of beta, or else end users will be left confused. In addition to those import issues, some songs report wildly inaccurate track lengths. While I’ve made no secret of my love of progressive rock, I know for a fact that none of the songs I uploaded are seven hours long, as it thought Jamiroquai’s decidedly non-prog “Use The Force” was. As of this writing, my requests for further info on these issues from Google have gone unanswered.

After the two-day upload process was completed, the website and Android app worked pretty much as advertised. My library is synced to my phone, and regardless of whether I’m on WiFi or 3G, it downloads songs. Any songs I pin, or flag for offline availability, are downloaded over WiFi only, but are available regardless of my phone’s connectivity. And playlists from the web player show up on my phone immediately. Streaming all my music has given me back about 20GB of space on my SD card; that’s worth the minor inconvenience of losing gapless playback and waiting a few seconds for songs to load, though I shudder to think what it would do to my cell phone bill if I didn’t have unlimited data. Unfortunately, it did not remain all sunshine and lollipops, as the app has decided at random times to re-download all the tracks I have pinned, and some corrupt downloads have remained in my cache. But, well, that’s why it’s called Music Beta.

In short, there’s a lot of promise here, but it remains to be seen what Google does with it going forward. When they add features and work hard to squash bugs like they did with Gmail, historically they end up with a winner. When they let the project sit stagnant like they did with Google Wave, it festers. Ball’s in your court, Google…

In many ways, Sweden’s Spotify is the grand dame of the cloud music world. Having launched in the UK in 2008 and spread across Europe in the last two years, It was very much sought after by music geeks on this side of the pond, who devoted a fair amount of time to tricking the program into running by using British proxy servers. In mid-July, after months of anticipation, invitations to the service were finally made available to American users, and for the most part the reaction has been very favorable. Unlike Music Beta for Google and Amazon Cloud Player, Spotify allows users to stream music from a massive library, so it has more in common with services like Grooveshark, Last.fm and Pandora. In some ways, having this level of access to almost anything could serve to make privacy obsolete. Why download the new They Might Be Giants album if I can stream it for free before I decide to buy it (or just continue to stream it for as long as Spotify lets me)?

The downside of Spotify is that its best features are locked down unless you pay for the service, and the mobile features are exclusive to the $9.99/month Premium plan. And unfortunately, at least on Android, the app is limited. There is no way to browse your library, which can at least include anything available on Spotify, by album. This can be explained by Spotify’s focus on playlists rather than individual tracks or albums, and the fact that mobile sync is tied to individual playlists bears that out. A bigger issue, at least for me, is that the Android app will import any playable audio file it finds on your SD card into your Spotify library on the phone, including ringtones and alarms. The Amazon and Google players both ignore directories that have a “.nomedia” file in them; Spotify does not, and it’s a bug that has been present in the app for at least a year. But it is the only one of the three apps featured here that supports Last.fm scrobbling. For those of us who like to keep track of what we listen to, this is a bit of a godsend, since the Last.fm app for Android does not work well with the updated Google player or at all with the Amazon app. 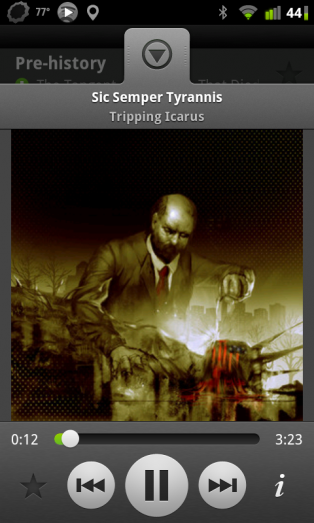 So who takes the crown?

It’s a tough call. Each of the three has a killer feature the other two lack, but all three have bugs that some could see as showstoppers. Warts and all, though, I would pick Music Beta by Google, with Spotify as a close second, but that could all change if Google opts to charge too much for the product once it’s out of beta. Until then, though, I’ll enjoy streaming my media from it and live with the other issues, especially since I’ve gotten about 7GB of space back on my SD card.

Send your Spotify playlists and other musical recommendations to Don @UnwinnableDonB