Call me biased, but outside of a few impressive action sequences I can’t get behind Michael Bay’s current crop of Transformers movies calling. Maybe it’s the confusing robot designs? Maybe it’s the weird racial stereotype Autobot twins, Skids and Mudflap? Maybe it’s the pair of wrecking balls swinging between Devastator’s legs? Or maybe it’s because, outside of the aforementioned action sequences, there’s really no subtext or character development to get me invested in these current movies. 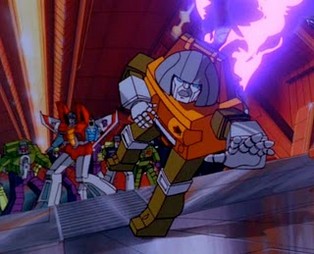 The less said about the humans the better, but unfortunately they take up a good 75-80 percent of the screen time. Every time Optimus Prime twitches his finger probably costs another two million dollars, so audiences are left with The Wacky Adventures of Shia LaBeouf for the first hour of the first movie. Maybe I’m just old, and long for a pumping hard rock soundtrack to accompany my predominantly robot cast when I’m watching a Transformers movie.

It’s a movie experience I’ll always cherish: Mom driving a six-year-old me to the old movie theater in Paramus, NJ. I was beyond excited because she asked me earlier that day if I wanted to see Transformers: The Movie, and of course I said yes. I couldn’t even fathom what lay in store for me – a chance to spend more than a half hour in the Transformers universe? I had expectations, and they were more than met from the opening credits alone. A hard rock drum beat started kicking, and an almost Queen-sounding chorus of “TRANSFORMERS!” blasted through the theater. Something different was going down, and this rock rendition of one of my favorite cartoon theme songs was only the beginning. As the tagline stated on the poster: “Beyond good. Beyond evil. Beyond your wildest imagination.”

The thing is, it hardly ever lets up. Transformers: The Movie can essentially be summed up like this: song, scene with talking, song with action sequence, talking, song with action sequence, song with talking. It essentially repeats this formula throughout the movie, and there’s absolutely nothing wrong with it. There are great soundtracks that symbiotically bond with the movies they’re attached to. This is one of them. Take out the rock songs and the wonderful Vince DiCola score and it’s a bunch of robots standing around talking about a giant robot planet that eats other planets (and sounds a lot like Orson Welles when it talks). Put it in and you’re emotionally connected instantly. You care about robots dying, about power struggles in the Decepticon ranks, about random alien worlds. You even forgive massive plot holes and characters that appear in one scene and disappear for the rest of the movie like Stegosaurus Dinobot Snarl, which I only nitpick about because I used to have the figure.

The soundtrack album on its own has some of the same problems. Yes, I can still get pumped to cheesy yet inspirational songs like Stan Bush’s “Dare” and “The Touch” (featured 11 years later in Boogie Nights!), but without frame of reference to the movie the album kind of falls flat. I love the song “Nothin’s Gonna Stand in Our Way” performed by the legendary Spectre General (?) but that’s only because it accompanies a kick ass scene of Autobots Hot Rod and Kup fighting the Sharkticons.

In reality the original Transformers movie soundtrack basically sounds like a low budget Sunset Strip comp from the mid 80s, with some interesting instrumentals mixed in, and superstar Weird Al Yankovic’s incredible Devo tribute “Dare To Be Stupid”. Nonetheless, this soundtrack is the X Factor that makes the original animated Transformers movie the best of the batch. It’s corny and it’s nerdy, but it’s also a catalyst for the fears, the enthusiasm, and hope of youth. By some bizarre accident, a 90 minute toy commercial blended music and visuals beautifully. Try making it through the (25 year spoiler!) death of Optimus Prime scene with Vince DiCola’s somber score playing in the background and not shed a tear, or at least feel pretty bummed out. For anyone who ever loved the toys and cartoon in their youth it’s a powerful loss, and as a kid it was a death none of us back then saw coming. The ‘90s comic book deaths of Superman and various X-men were still years away after all!

Again, neither the Transformers movie nor the soundtrack alone are exceptional (although the soundtrack is pretty great in its way), and if you’ve never given a shit about the trials and tribulations of Cybertron then I doubt you’ll be converted now, but for the rest of us there’s still a place cemented in our hearts from the legacy of the cartoon and its accompanying cult classic movie. It created an emotional attachment that the current movies are lacking, and even the other ‘80s toy commercial cartoon movies never quite got. When it’s a ridiculous over the top concept, attach a fully ridiculous over the top experience to it that attacks almost all of the senses. At the end of the day, when it’s a movie directed at selling stuff to kids, then sometimes it helps to make those kids feel like kids. 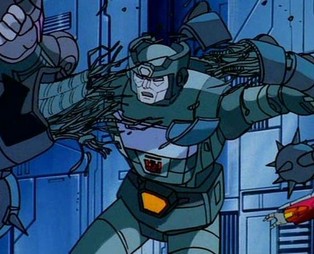