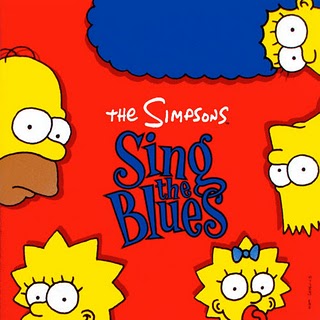 If NPR’s All Songs Considered is to be believed, 90’s nostalgia is now a “Thing.” That’s all well and good, but I think that when they talk about being nostalgic for the 90’s, most people are probably thinking about the mid-90’s, when a puritanical, authenticity-obsessed notion of coolness was in vogue for a few minutes. They tend to forget about the early 90’s, a pop culture epoch so corny it almost rivaled the variety show era of the 1970’s. It was the time of Club MTV, the puppet sitcom Dinosaurs, and Ugly Kid Joe.  The Simpsons Sing the Blues was this era’s equivalent of the Star Wars Holiday Special: a mostly-forgotten bit of pop-culture ephemera made on the quick to cash-in on a surprise hit.

Unlike the Star Wars Holiday Special, The Simpsons Sing the Blues was actually well-received by the public upon its release in December of 1990! And while I doubt anyone involved with the disc looks back on it with great pride, I haven’t heard anything about Matt Groening attempting to bury it. MAYBE HE SHOULD.  I for one would certainly like to pretend it never existed, because acknowledging that it did means coming to grips with the fact that I used to actually enjoy songs like “Do The Bartman”, the album’s hit single and lead-off track, co-written by a Bart Simpson enthusiast known as Michael Jackson.

“Do The Bartman” is an example of that most early-90’s of music styles, New Jack Swing. Backed by faux-soul studio singers, Nancy Cartwright raps about juvenile hi-jinks like dropping banana peels on the floor that are far too lame for Dennis The Menace, let alone The Simpsons. Most of the world apparently loved this piece of shit – it topped the singles charts in Australia, Ireland, New Zealand, Norway and the UK. At least some of this popularity can probably be attributed to the song’s music video, which was directed by a guy named Brad Bird who would go on to direct The Incredibles and Ratatouille.

Next up, a Bart Simpson rendition of the Chuck Berry classic “School Days”, which sounds like something off of a Kidz Bop album. On a similar note, Homer Simpson’s cover of B.B. King’s “Born Under a Bad Sign” has a definite “Simpsons cast at karaoke night” quality to it, but I guess it is at least an appropriate song choice, since the Homer from the earlier seasons of the show was less the bumbling moron and more of a sad-sack everyman.

Well, if you enjoyed that little studio musician blues workout, you’re in luck: it’s followed by “Moanin’ Lisa Blues”, which sounds like it was banged out by the same cats that did the Roseanne theme song. The only song on the album that directly refers to events from the TV series, “Moanin’ Lisa Blues” essentially recounts the plot of the Simpsons episode of the same name. Unfortunately, that was a pretty wretched episode (it was the one that introduced nobody’s favorite Simpsons character, “Bleedin’ Gums” Murphy). 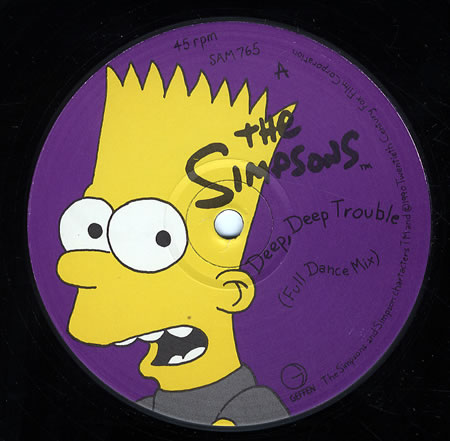 We now arrive at the album’s second biggest hit, “Deep Deep Trouble”, featuring beats by DJ Jazzy Jeff and more terrible, terrible rapping by Nancy Cartwright. While the lyrics are a little more Simpsons-y than the lame rhymes about movin’ and groovin’ in “Do The Bartman”, there are also a lot more of them. When will this song end?

What follows, eventually, is the first legitimately amusing moment in this listening experience, although it’s unintentionally funny. In an introductory skit for “God Bless the Child”, Lisa requests that the producer ditch the synthesizers in favor of the authenticity of live musicians. Live musicians are brought in, and they proceed to perform some of the slickest, least-soulful smooth jazz you’ve ever heard (and synthesizers are definitely involved). That’s funny for about two seconds, and then you’re stuck listening to Yeardley Smith singing a very straightforward cover of “God Bless the Child”.

Next comes the part of the album where Marge and Homer sing one of Randy Newman’s whimsical modern tin pan alley-type songs. I would say something here about how similar all Randy Newman songs sound, but I’m really impressed that Marge and Homer Simpson managed to cover a song from the Toy Story soundtrack FIVE FUCKING YEARS before Toy Story hit theaters! This album is amazing.

There’s more unintentional hilarity to be found in “Spingfield Soul Stew”, Marge Simpson’s take on “Memphis Soul Stew” by King Curtis. It seems the people who curated the covers for this album were pretty confident that they’d manage to snag some seriously soulful session musicians, but it was not to be. The result is similar to the cognitive dissonance of Bob Seger’s “Old Time Rock and Roll”; the lyrics describe a level of authenticity that is not evident in the song itself.

I actually had fond memories of the next song, “Look at All Those Idiots”, a duet between Mr. Burns and Smithers backed by a very 90’s dance beat. It doesn’t really hold up as being particularly hilarious 21 years later, but Mr. Burns’ caustic assessment of his employees is definitely more in keeping with the spirit of the show than the shitty covers, blues pastiches, and rap songs that came before it.

Hang in there, we’re almost done with this! Album closer “Sibling Rivalry” is a fairly ambitious R&B/musical theater monstrosity with a few different sections and a lot of dialogue between Bart and Lisa. Unfortunately, it seems the person(s) who wrote the lyrics didn’t know much of anything about Bart and Lisa aside from the fact that they are siblings. If you’d never seen an episode of The Simpsons and you listened to this song you probably wouldn’t even know the show was supposed to be funny!

Well, that’s the end of that chapter! In the end, The Simpsons Sing the Blues is probably not worth listening to in 2011. The music is embarrassing, the production is dated, and the attempts at humor are few and weak. But it is an interesting artifact from that strange window of time between the end of the 80’s and the beginning of the 90’s that we all want to remember.

Musical Coffee Break that Will Swallow All Your Free Time