Brian Michael Bendis, Mark Bagley, Stuart Immomen, David LaFuente and some of the finest artists in comics gave us one of the most beloved interpretations of the Wall Crawler. Today, we lay Peter Parker, the Ultimate Spider-Man, to rest.

I remember the first time I came across Ultimate Spider-Man. I’d just gone to get a bite to eat with a lady friend at the local diner. The manager sat behind the register, reading the newspaper.

“These comic movies are changing the comics,” he said.

He plopped down the newspaper and showed me the article. 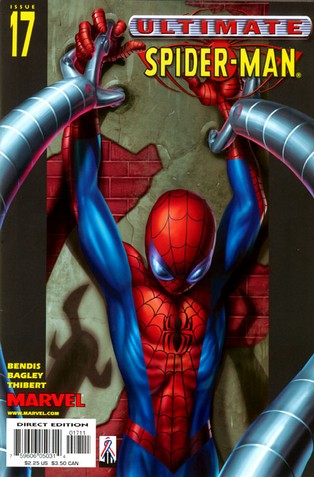 I hadn’t read Spider-Man in a long time. There were clones, and the Green Goblin was back, and he had a dead baby and Aunt May was dead and then she wasn’t and there were clones – ugh. Reading a Spider-Man comic was like dating a pathological liar who was also an alarmist with multiple personality disorder. No thanks.

However, I read the article. It was about how since the first X-Men and first Spider-Man films changed the way the mainstream saw comics, Marvel Comics was going to release a streamlined series of books aimed at new readers – the Ultimate line.

I went to the comic shop a few days later, snagged the first issue and thus began my renewed interest in Spider-Man.

They’re killing Spider-Man? I thought they were making a movie.

That was ten years ago. I’ve since graduated college, got a job, moved out and all that good stuff. But Peter? Ultimate Peter? He’s been swinging around New York and worrying about high school for those ten years. Ultimate Spider-Man didn’t quite do what it was supposed to do ( i.e., draw people who don’t read comics at all into comic shops), but it did find an audience. The book was also a consistent best seller thanks to writer Brian Michael Bendis and original series artist, Mark Bagley.

Bendis and Bagley gave us a more modern, yet timeless Spider-Man who was discovering his powers and coming into his own. J. Jonah Jameson wasn’t sure what to make of this Pete and Mary Jane wasn’t a supermodel – she was still a high school nerd too!

Peter’s enemies were also growing. Otto Octavius wasn’t completely bonkers yet. Flint Marko was a crook. Norman Osborne was not yet the master strategist who took down Asgard. These were exciting times for Spidey. Nothing was certain and everything was possible and that leads us to today.

Nothing is certain in the Ultimate Universe. What started as a line that was new-reader-friendly became the line where anything could happen.

Marvel could kill Doctor Doom in these comics – and they did.

Marvel could kill Magneto, Professor X, Wolverine, Cyclops and damn near most of the X-Men – and they did.

Marvel could make Nick Fury look like Samuel L. Jackson – and they did.

As time went on, Peter Parker’s life evolved and as it evolved, so too did the world around him. Peter was on a course towards his mainstream Marvel Universe counterpart, even if the rest of the Ultimate Universe was not.

Yesterday, I got an email from my boss with a USA Today article link.

“They’re killing Spider-Man? I thought they were making a movie,” my boss wrote.

I clicked the link and read the article.

Anything can happen in the Ultimate comics.

Marvel could kill Spider-Man – and they did.