I have to admit to being a little lost when I started reading issue #3 of Secret. This has nothing to do with the writing but with the publication schedule. The last issue of Secret was released in June of 2012, so forgive me for being foggy when it comes to characters and plot threads. But in its return, Secret is as intriguing and as sharp as ever. 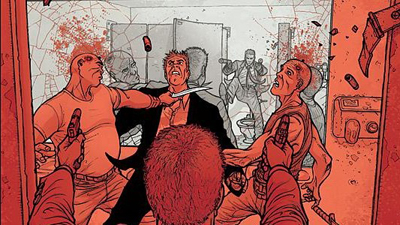 What makes Secret such an engaging read is its characters. Grant, Secret’s surly, hard-edged leading man, is portrayed well through Jonathan Hickman’s slick, punchy dialogue. This is especially evident in the final moments of the comic when Grant recruits Chad Yuon, a computer whiz with a penchant for laundering money. The back-and-forth between Grant and the smarmy, two-faced Mr. Krinn is evidence of Hickman’s ability to reveal character through dialogue, and the decision to focus on Krinn’s face was a smart one, showing readers that sometimes the bad guys don’t win.

Plus, while we’re only given small reveals of Grant’s occupation, they’re enough to keep anyone interested. A lot of the reveal is done through dialogue which only inflates the mysteries rather than addressing them. But Hickman gives readers one panel — a singular panel of action — that is enough to whet any readers’ appetite for more.

And the comic is so well constructed because of Ryan Bodenheim. His composition is perfect, and the smooth, lush ink styling he uses makes every image powerful. Faces are a work of art in Bodenheim’s hands, and the use of sparse colorization by Michael Garland highlights Bodenheim’s work. Garland’s choice of color, from soft purples to garish reds, to subdued greens, only aids in the tone of each sequence.

The only negative I can say about Secret is that it isn’t published regularly. For a book with such a heavy premise, Image needs to keep its readers engaged. Secret requires regular reading because of its density, and waiting too long in between issues may push some people away.

But then again, issue #3 was fantastic, so even with its delays, Secret still delivers on all fronts. 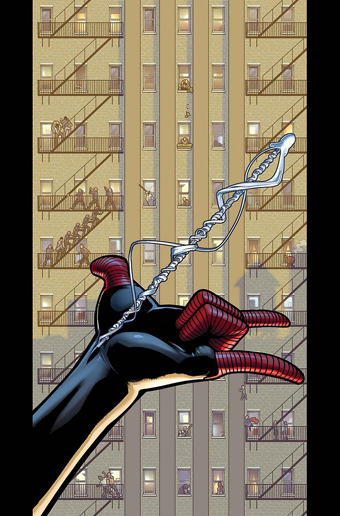 There are things I really like about Brian Michael Bendis’ third volume of Ultimate Spider-Man. Miles Morales, for starters, is a great hero, and his struggles as Spider-Man have been engrossing. I’ve also enjoyed Bendis’ focus on corporations as responsible for a lot of the death and destruction in New York.

This also works against the series. How many more heartless and corrupt CEOs can we meet? Is each one focused solely on a new super soldier serum? Does each CEO only care about making money for his corrupt corporation? This is an angle we’ve seen before, so reading this comic is a bit of a rehash of old story lines.

Bendis has dragged this story out across all volumes of his Ultimate Spider-Man run. Roxxon appeared as a player in volume one, and has been a major player in everything in volume three, so it’s no wonder that they have a role in Bombshell’s creation. I’m not saying it’s not interesting — it definitely is, but Miles has lived a more sheltered life than Peter, and I want to see him branch out and have as many adventures as his predecessor.

This is where Bendis shines. He has a way of humanizing his characters so that you feel drawn to them. I enjoyed Bombshell’s mother’s backstory a lot, and the surprise at the end is definitely unexpected. Plus, the addition of Taskmaster is another layer of Bendis’ already three-dimensional universe. He effortlessly pulls in characters from Marvel’s 616 universe, and finds ways to organically work them into his story.

And of course there’s David Marquez’s art. In the flashbacks, Marquez employs a grittier, hatch-heavy style of art — one that looks almost completely different than what we’ve come to expect. It works well for the comic, and highlights his ability to alter his style as story dictates. Every other is polished and smooth, partially due to Marquez and partially due to Justin Ponsor’s beautiful colors.

Bendis is definitely leading to something. Roxxon’s role in the new Venom means the company is tied directly into Miles’ mother’s death. Their retribution is coming, and hopefully Miles will make the right people pay while still maintaining his heroism. But he’s running out of time. In November, “Cataclysm” hits and all Ultimate titles cease printing.

Oh, and Miles Morales is headed to the 616 universe.

There’s not much time for Bendis to wrap his series up with a worthy conclusion, so I hope that if Ultimate Spider-Man closes shop in November, it does so well, and that we all go away at the very least glad to have enjoyed the ride. 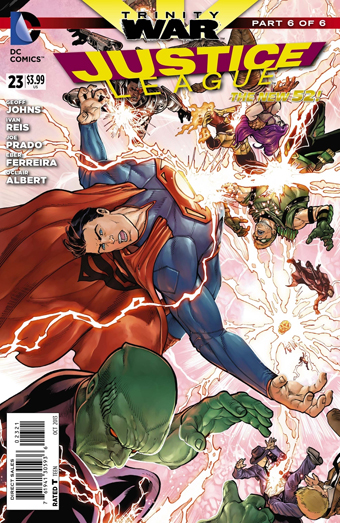 Bannen’s Book of the Week: We knew that “Trinity War” would end with the bad guys winning. Geoff Johns admitted this in a promo for “Villain’s Month” a few weeks back, and since then DC has been peppering its books with solicits for a villain takeover in its September releases. The question was, of course, how the bad guys won, and what their intent was. Johns answers these questions and more in a grand, epic conclusion befitting what we’d expect from DC’s chief creative officer.

Most of the comic is the good guys battling the other good guys, but when Johns gets to the meat of his story, the secrets he’s been keeping from readers, the comic takes on a new life. I really enjoyed the final reveal of the people behind the plot to destroy Superman, and what the purpose of Pandora’s Box really is. Furthermore, DC’s universe is always expanding, and this is ever present in Justice League #23. When the puppet masters are revealed, the title “Villain’s Month” makes a lot of sense. Plus, the villains are people I definitely did not expect, and their appearance at the end is made all the more spectacular because of it.

Additionally, Johns works with longtime partner Ivan Reis, who is no stranger to grandeur. The comic is littered with splash pages and sharp detail. Reis smoothly conveys the action of the comic (and there is a lot of it) without missing a beat. He shifts effortlessly between tight shots and wide shots, using point of view for effect. In one scene, something pretty graphic and horrible happens to Vic Stone, and Reis makes the scene all the more intense with his incredible precision. Rod Reis is there to bring the imagery to life, particularly in the splash pages. Even in the more detail-heavy moments, he provides clarity and order, and the book is better because of him.

I had little faith in “Trinity War.” My expectations for the series were colored by an assumption that turned out to be completely wrong. Now, I’m excited to see what DC has in store for “Villain’s Month.” The ending Johns provided is only the tip of the iceberg, and there’s so much potential for the future of the DCU. Hopefully, they capitalize on this and really work on expanding the world created in the wake of the new 52.

If this is any indicator, I think we have a lot to look forward to.