The Thing crushed Doctor Doom’s head like it was an empty beer can.

The X-Men are no more.

This is the Ultimate Universe and since Ultimatum and Ultimate Comics: Fallout, it’s a place where readers have no idea of what’s coming.

The Ultimate Universe’s status quo is, on the surface, new and shiny; but when one pulls back the layers, it’s actually a lot more familiar – and that is a good thing.

So, let’s take a look at Ultimate Comics Universe Reborn.

With a 30 percent S.H.I.E.L.D. budget cut and no Captain America, the Ultimates have to get back to basics while facing off against real-world issues and mad scientists. Luckily, the book starts with Ultimate Earth’s Mightiest Heroes on the team – Iron Man and Thor.

Ultimates writer Jonathan Hickman’s already confirmed that the first villain is Reed Richards and his Children of Tomorrow (or the Ultimate Future Foundation) and that the Ultimate version of Spider-Woman will be on the team, too.

This Reed Richards, scarred by loss and fueled by youthful hubris, is still true to his traditional counterpart’s need to solve everything. Instead of being the genial, brilliant tinkerer, he’s the grim mad scientist. This Reed doesn’t have his family and friends. He’s alone and insane. No longer the altruist, Reed is a bastard and it will take Earth’s Mightiest Heroes to stop him.

Spider-Man is still a broke, outer-borough NYC teenager who gets picked on yet still tries to do the right thing. The difference is his name is Miles Morales and his skin is brown. We don’t know much about Miles save for that he has some spider-like powers, he’s a Brooklyn teenager and that his motivations somehow involve Peter’s death being his “great power, great responsibility” moment.

Before Peter died, J. Jonah Jameson told Peter he knew that the friendly neighborhood wall crawler and Peter were one in the same. He promised to keep Peter’s secret safe – and pay for his college. With Peter dead and this new, mysterious Spider-Man in the neighborhood, one has to wonder how ol’ flattop will react. My guess is the Daily Bugle will dust off its famous headline sooner than expected. 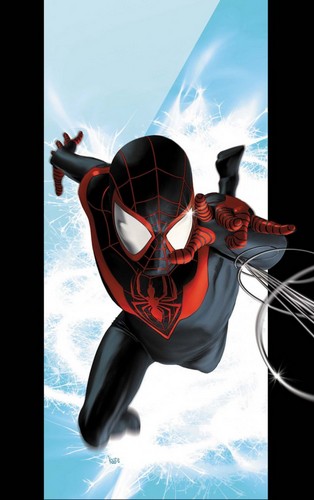 The Children of the Atom

The X-Men are feared and hated. With Wolverine, Cyclops, Magneto, Professor X and most of the X-Men characters dead, writer Nick Spencer has said he views the Ultimate Mutant status quo to be akin to the classic “Days of Future Past.” All the horrors have come true.

Wolverine and Magneto are, arguably, the most recognizable of all the X-Men characters. With both of them dead, the spotlight falls to their sons.

The last time we saw Jimmy Hudson, he and Jean Grey (under the guise of Karen Grant) formed the superhero group, the Tomorrow People. Mr. Spencer hasn’t revealed too much of what Jimmy will be doing in Ultimate Comics: X-Men, but his costume sure does look familiar, doesn’t it?

Quicksilver, on the other hand, is very similar to his traditional counterpart – he’s batshit crazy!

Since Magneto’s death, Pietro has assassinated Cyclops, taken up his father’s cause of mutant domination and has frequent talks with his dead sister. 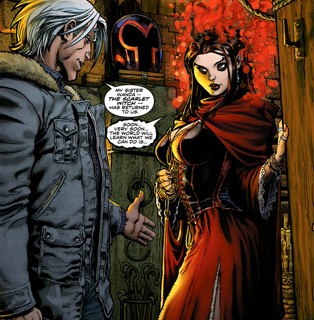 What’s most interesting about Ultimate Quicksilver isn’t his ruthlessness – it’s how far ahead of the game he seems to be. Without Magneto, Crystal or a lengthy career with the Avengers, this Pietro has applied himself fully as his father’s heir.

In Ultimate Fallout, Pietro seems to be playing multiple chess games. After rebuilding the Brotherhood in Ultimate X, Pietro convinces a wealthy industrialist that he is willing to sell out the mutant race – literally. Pietro proposes to sell his brethren into super-powered slavery. What game is Quicksilver playing? No one but the brains behind Ultimate Comics: X-Men knows, but it will sure be a lot of fun seeing Quicksilver take on the surviving X-Men.

Ultimate Comics Universe Reborn is an exciting playground for writers and artists, but its real strength is how it resonates with readers. It’s more than a What If? series. It’s a place where creators and readers can look at Spider-Man, Iron Man and the X-Men from a different perspective while those characters remain true to character and archetype.