A Spanish artist friend of mine once told me, “You are not making art, unless you are painting with oils.” Some might think my friend is being high-handed and arrogant, however I hold these words true to my heart. I felt as though my Spanish friend was trying to impress upon me there is a level of commitment needed to create art, or do anything in life. Despite that sacrifices might have to be made they are all blended into the work, like the paint on canvas. Never once did I misconstrue his words for the literal interpretation. 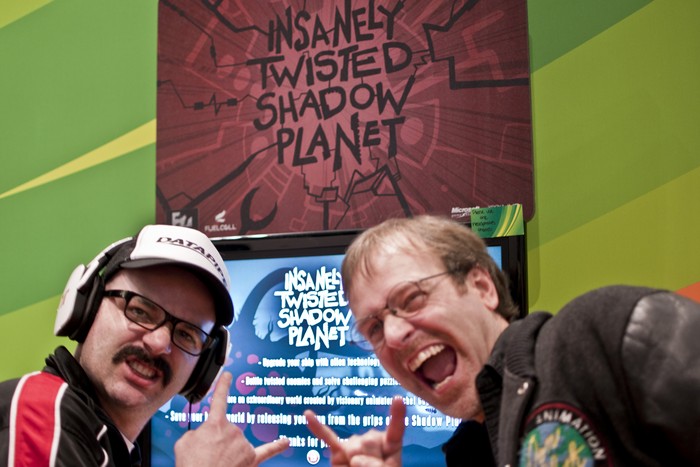 At PAX East I spoke to game maker Joe Olson. I expressed my anticipation to him by asking , “I really only have one question, and that is when?”

With a big smile he replied, “This summer,” he then asked if I wanted to try one of the early builds of the game, and meet Michel Gagne.

Michel is firstly a filmmaker has worked on some of the greats, Iron Giant, The Incredibles, Powerpuff Girls, and Star Wars: Clone Wars. Check out his early work with 1995’s short animated piece Prelude to Eden. This film harkens the visual styles that will be incorporated into Insanely Twisted Shadow Planet.

Michel and I spoke about varying topics, but mostly about Swedish death metal and Norwegian Black Metal, because the music for the cinematics is provided by Dimmur Birogr. Seems like, all good people like heavy metal in one form or another. I asked Michel how long he had working on this creation he told me since 2006. It was a very meta experience having Michel walk me through the demo of the game. To actually have the artist watch me control the visuals of the art he created.

The controls are well realized and fluid. Reminiscent of the old Atari 2600 game Laser Blast, with ship customization familiar to the classic 2D shooter series R-Type. Insanely Twisted Shadow Planet is the story of a small alien ship against insurmountable odds. With smooth and confident controls you fly this alien ship through a stark world full of danger and teeth.

Aside from the powerful visuals, and smooth clean controls, Insanely Twisted Shadow Planet is most certainly, art. I would have bought a print of Michel’s work had it been for sale.  With what is known now about game design we can go back to the 2D and perfect it and create something new using only that rule set. When you paint with oils you are creating to your fullest potential.

Look for this game, it is expected to come out this summer. Hopefully it will be another fun summer of well released downloadable games!

While dodging laser blasts Chuck can be followed on twitter @JapanDudeGirl.

Statistics are Making Us Into Assholes: A Modest Proposal to Reform League of Legends
Previous Post