At the intermission for the preview of The Book of Mormon, about half a dozen people near my seat left and never came back. A humorless man behind me prattled on about how Jon Stewart said the musical was very respectful toward the Mormon religion even though the opposite seemed to be true.

It was truly amazing that people could go to a musical by the creators of South Park (Trey Parker and Matt Stone) and Avenue Q (Robert Lopez) and still manage to be surprised that it was full of profanity and razor sharp satire.

The Book of Mormon is full of plenty of other things as well – catchy songs (is it me, or do I hear a hint of ‘Get Ready’ by the Temptations floating around in there?), non-stop laugher (almost painfully so) and a positive message about people trying to be better people. 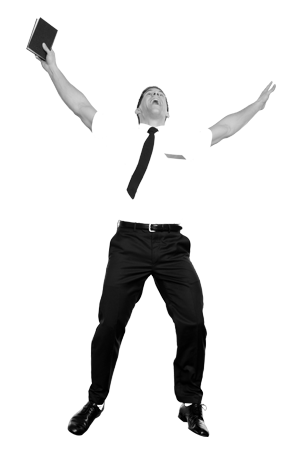 The musical follows two young Mormons as they embark on a mission to Uganda. There, after the rotting corpse of donkey is dragged across the stage, the show drops its first F-bomb and things really get rolling. Amidst broadsides aimed at Julie Taymor’s Lion King: The Musical and the AIDS jokes, Book of Mormon also chronicles the story of the early days of the Church of Jesus Christ of Latter-day Saints and its founder, Joseph Smith.

The details of the religion are presented in a straight forward way (Mormons get to rule their own planets in the afterlife), usually in the same breath as a tidbit from Jewish (God created the universe) or Catholic (God’s only son sacrificed himself to save the world from sin) theology. But what the gentleman behind me failed to understand is that Parker and Co. aren’t saying that Mormon religion is ridiculous, they are saying that all religion is ridiculous.

And that is fine by them. The real heart of The Book of Mormon lies in the idea that even though Mormons believe in something that looks utterly ludicrous when cast in a rational light, belief itself has the potential to do amazing things. It can inspire hope in the hopeless and change lives for the better.

Believe it or not, at its core (underneath the cussin’), The Book of Mormon is a Broadway musical in the truest sense – along with an extravaganza singing, dancing and blinding smiles comes a huge dose of bright-eyed optimism.

If it were any other way, the audience would not have given a standing ovation as long and as loud as the one it did.

The Book of Mormon opens tonight. I apparently managed to write this entire piece without a single swear word. Follow me on Twitter @StuHorvath and I will try to make up for that.