Most of the recent MMO releases have been as original as vampire movies mired in teenage angst. They seek to capitalize on conventions established by their predecessors. It’s not a bad starting strategy to construct a game that is instantly familiar to the masses. These titles tend to have one or two gimmicks or twists of their own: “Because orcs are so last year, we allow you to play bipedal space otters instead.” This trend has led to stagnation. Players that have tried MMOs in the past and not enjoyed them aren’t suddenly going to become fans. Those that do enjoy MMOs aren’t likely to abandon their favorite game—that they’ve invested hundreds of hours in—for something else that is essentially the same.

Fortunately, ArenaNet’s design plans for their upcoming title, Guild Wars 2, takes a decidedly different approach. I attended a panel discussion with the game’s design team at the recent PAX East convention. The buzzword that they drilled was innovation. They were clearly not impressed with the direction the MMO genre has been iterating on for the past several years and they were going to do something about it.

They railed against the questing conventions that we’ve all grown accustomed to and created a replacement system called dynamic events. In current MMOs, you might approach an NPC (topped with the signature exclamation point) and after reading a lengthy chunk of text, learn that the village is being attacked by centaurs. A quest is offered to slay eight of the marauding half-horse half-men in exchange for a smattering of experience points and gold. After accepting the quest, you approach the highlighted area of the map, locate the centaurs—who appear to be standing around with nothing better to do—and battle them. After killing your assigned creature quota, you move on ignoring the rest of the centaurs. 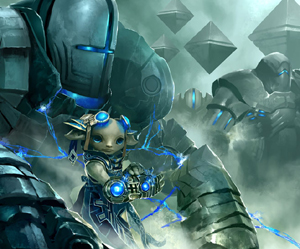 The dynamic event system in Guild Wars 2 handles this sequence of events differently. Rather than reading about what is happening, you’ll see it. The centaur war-band will run into the town and begin to attack its inhabitants. It’s up to the players to stop them and success is not measured by slaying a set number of the centaurs; you either stop the invasion or the centaurs take over the settlement. Either outcome leads to different storylines. If the centaurs take over the village, they might branch out and attack other nearby settlements. It will then be up to the players to take back their lands once and for all.

There are over 1000 dynamic events currently planned for Guild Wars 2. To keep the encounters engaging, the difficulty scales based on the number of players involved in them. After an event is over, players are rewarded, even if they left the area before it was completed. Players receive gold, experience and loot proportional to the amount they contributed to the event. The more you do, the more you get.

A common gripe of MMOs is that a player’s actions don’t have any impact on the world around them. To compound the issue, everyone who plays through a specific area has the exact same experience. It’s a difficult situation because on any one server you have thousands of heroes that all want to feel important. How can you give everyone a unique adventure? ArenaNet believes they have a solution to this conundrum in the form of personal stories. 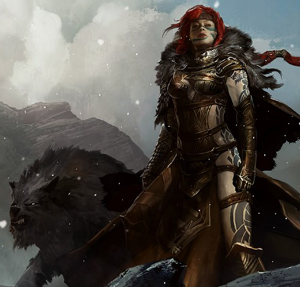 When a character is created for Guild Wars 2, the player is asked a series of biographical questions. The answers given will help tailor a unique experience. For example, you might be asked to define your social status by choosing gentry, commoner or streets. NPCs will treat you differently based on your answer and different quests may be open to you as a result. If this feature is pulled off correctly, it could mean that two players can have two completely different experiences even though they are both playing human thieves.

Each player also has access to a personalized home instance in their race’s capital city.  This space is customized based on choices the player makes while exploring their personal story.  The ArenaNet team members gave an example of how this can play out. Basically, they give you an awful Spiderman-esque dilemma: the hospital and the orphanage are both about to be destroyed and you have time to save only one…which do you choose? Do you save the orphanage? Great, but the hospital in your home instance will look like a pile of rubble. Do the reverse and get used to seeing homeless children in the streets—you big jerk!

There were also some smaller nuggets of innovation that ArenaNet offered the audience. Strap in for the lightning round:

The developers wanted everyone to know three things right away: Guild Wars 2 is a fully persistent world (unlike the preceding game), yes there is jumping (also unlike the original Guild Wars), and there is absolutely no monthly fee to play. Hooray!


To assist in building a cooperative community, there is no kill stealing in Guild Wars 2. If more than one person or group helps kill a monster than everyone is awarded experience points and loot.


The voice-over dialogue recorded for Guild Wars 2 could fill over 60 feature films.


The cities will have mini-games to partake in. One city will have a perpetual bar brawl while another has a shooting range.


PVP modes include a 5 vs. 5 game (rated and unrated), hot-joinable PVP and massive server vs. server, which was described by the developers as “gigantic unbalanced PVP.” All PVP modes will offer experience points and loot rewards.


The sidekick system attempts to solve the problem with new players not being able to play with their friends who have high-level characters. This unique feature scales characters up or down based on the content they are tackling. It also works as an anti-griefing measure to prevent max-level characters from disrupting the newbie zones.

Guild Wars 2 will feature an auction house system called the Marketplace. As with most MMOs, players can post items for sale with a set price they are looking for.  You can also put up a price of an item you are looking to purchase and if a seller sees your bid, they can complete the transaction.

Every class can perform all three roles of the RPG trinity: tank, heal and deal damage. This allows you to play with your friends without having to worry about what each person is playing. Groups of 5 guardians or elementalists should be viable.

As an avid MMO player, I applaud the efforts of ArenaNet in their attempt to advance the genre to the next level. Most new titles today are mimicking what is already in the market. My 6 year old son was able to play the recently released Rift with very little assistance because the interface is extremely similar to World of Warcraft. That’s not necessarily a bad thing or entirely unwise. Making changes for the sake of being different is a good way to go down in flames in a hurry. But I agree that it’s time to see a new direction. We need a game that examines the faults of the genre—which the community has accepted as the norm, says “screw you,” and then boldly redefines what gamers should expect from their MMO. Guild Wars 2 might just be that game.