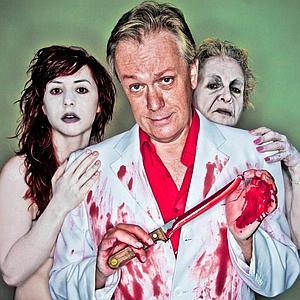 When I was in high school, my father and I saw Penn and Teller on their 1991 Refrigerator Tour. We had remarkable second row seats. That night I remember well, because I was very sick. So sick I actually threw up in an alley at a side door exit of the theater just before the show started. I have never seen something so impressive as that show. Those were special effects happening right in front of you, true magic.

Recently I saw Play Dead, a live stage show production created by Todd Robbins and Teller (of Penn and Teller). This show is certainly not a typical theatrical production but more of an invitation to the strange and unknown world of spiritual mediums and the macabre. Basically a one-man show with some audience participation, Play Dead is hosted by Todd Robbins and directed by Teller.

Who is Todd Robbins? 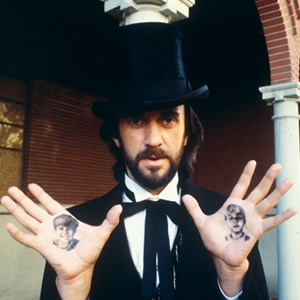 Todd Robbins is the kind of entertainer who is cut from a different mold. He wears a white suit, and being someone that fancies himself as someone that can pull off a white suit, I respect that. When you think he is going to start with evangelical style preaching, he doesn’t. There is no hack, Rob Zombie, Criss Angel, Marilyn Manson-styled bad carnival imagery. In the early 80s Disney released a movie called Something Wicked This Way Comes. Jonathan Pryce played a character known as “Mr. Dark.” His character was dressed in an undertaker’s suit and established for me what evil could look like. Todd Robbins is more like that.

But what is Play Dead?

In the days before movie theaters were cut into multiple screens and where the cost of a soda and a drink is just as much as a ticket, movie theaters were just that – a theater. Sometimes theaters would book traveling magicians to do a scary show after the last film of the night was shown. These performances were generally referred to as a Midnight Spook Show. With stage props, scantily dressed girls and charisma, the magician would titillate and terrorize the audience with tales of horror and delirium. Sometimes these shows were more shtick than substance, but the people stayed to watch, and they stayed for a reason. The Midnight Spook Shows were featured in movie houses from the 1930s to the 1970s. Play Dead is a return to this kind of live entertainment.

I don’t plan on giving anything away, but the show is about 90 minutes with no intermission. There is also a sign in front that lets the audience know that some of the show is in complete darkness, and if you are not interested in having your fears played on, then you need not apply.

An Unwinnable Letter to Santa