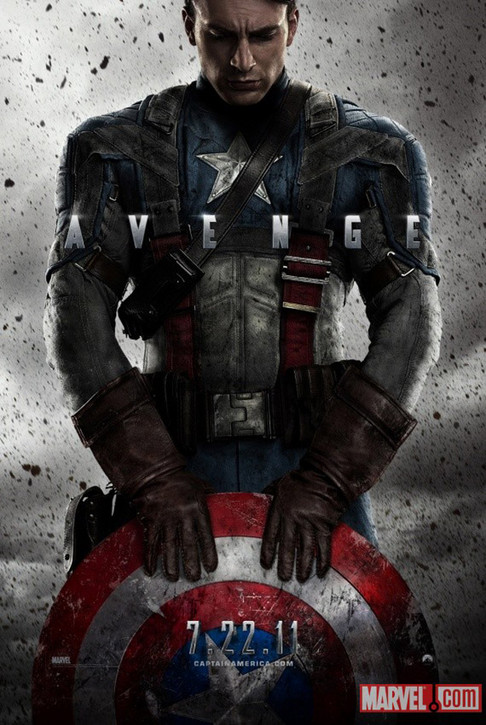 Mondays are a drag. It is too hot/too cold/too early/too rainy/too soon to be going back to work. Friday is brutally far away. There is no better time to complain – about everything.

It is in this spirit that Unwinnable brings you Monday Moaning, a new weekly feature in which Team Unwinnable will pick a topic and tell you exactly how we feel about it. No minced words. No excuses. Just good old fashioned grumbling, griping and grousing. Just the way Monday mornings should be.

For our first target, we take aim at the costume and movie poster for Captain America: The First Avenger.

Cap is, of course, one of the premiere characters in the Marvel Universe, but his previous film incarnation in 1990 left a lot to be desired. Actually, it left everything to be desired – the only Marvel movie that is more atrocious is Roger Corman’s heinous Fantastic Four.

There is a lot riding on First Avenger. Not only is the film legacy of Captain America on the line, but the future of the larger Avengers film franchise is also at stake. Will it sink or soar? Team Unwinnable weighs in:

Stu Horvath: The costume leaves me cold. Actually, the helmet is what really ruins the awesome for me, I can live with him in the poster when he is unmasked. This whole affair strikes me as something that could have and probably should have been amazing – Joe Johnston was probably born to direct Captain America – but it all strikes me as flat and uninspired. And the poster leads me to believe we will be in for an awful lot of obnoxious slow motion. Pass!

Dave Trainer: Aside from the poster, which looks like he’s been Photoshopped into a Band of Brothers scene,  I’m with Stu, the helmet turns me off. Seriously if I saw a guy with that mask on run up to me and offer help, the first thing I would think is that the guy is mental. But its part of the original costume and die hards would have a conniption if it was removed so I’ll give it a pass. But unlike Batman, there is no way this guy is going to look like a badass with a bowl like that on, even in slow mo. And everything looks awesome in slow mo! I’m going to wait until the trailer hits, never see it in theaters, then catch it on Starz on one of my days off doing laundry at home in October. Rating: Ambivalent.

Don Becker: That poster is awesome. I can’t wait for whatever Call of Duty game it’s promoting to come out.

Ian Gonzales: I’m not as disgusted by this poster as some of my fellow Unwinnablers are.  It’s a teaser poster, meant more for the people who watched Band of Brothers and played Call of Duty, but may not know that Captain America’s origins lie in World War II.  I’m fine with it.  What I do find a tad odd is Marvel Studios choosing to air the trailer for a flick about a scrawny kid on performance enhancers during the Super Bowl.  I’m also not fine with is only seeing the Hydra symbol on Red Skull’s armband.  The guy was a Nazi scumbag and I hope the filmmakers don’t shy away from that.  Marvel Studios looks to be doing a damn fine job building the world established in Iron Man and The Incredible Hulk and I’d hate to see them pull back on Red Skull’s origins out of fear of offending people.  Indiana Jones hated Nazis and so should Captain America!

John McGuire: This photo is so airbrushed if you told me it was an ad for a Bowen Statue I’d believe you.

Ken Lucas: I’m having flashbacks of the 1990 version of Captain America. I will say that the pictures of Hugo Weaving as the Red Skull look great. Honestly, I was never much of a Captain America fan. I really only read The Invaders (the original). Since my expectations are low, I can only hope this films exceeds them.

Peter Lang: The film is NOT being released on July 4. Color me a very offended red, white and blue.

George Collazo: I actually think Chris Evans looks awesome as Cap! And if it’s half as
good as the original Captain America, Daredevil, Ghost Rider, Spider-man 3, X-Men 3: The Last Stand, Fantastic Four, Fantastic Four: Rise of the Silver Surfer, Man-Thing, Electra, Punisher: War Zone and Howard the Duck then we’ll have a hit! Hmm, are good Marvel movies the norm or the aberration?

Chuck Moran: It is directed by Joe Johnston, who did The Rocketeeer, which I liked, but that was 20 years ago. The last movie he directed was The Wolfman. That sucked.

Unwinnable Goes to the Movies: Guardians of the Galaxy
Previous Post