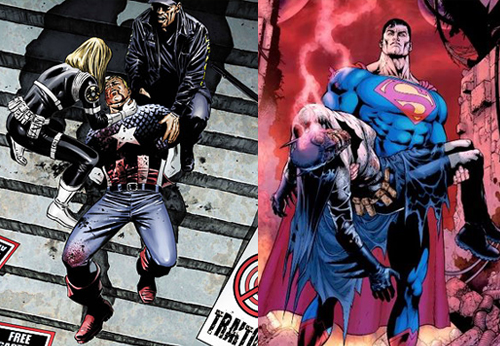 How else to explain how over the past few years the storylines of the Caped Crusader and Captain America have eerily mirrored each other in the pages of their comic titles, despite the fact that they are published by arch-rivals DC and Marvel respectively?

For those of you not loitering in comic book stores every Wednesday, Captain America “died” in March 2007, a shocker broken by this reporter in the New York Daily News with the fanfare usually reserved for real political assassinations. About a year later, writer Ed Brubaker gave Cap’s former sidekick Bucky Barnes the shield to become the new Captain America. Meanwhile over in Gotham City, Batman seemed to be obliterated by Darkseid (and his henchman, writer Grant Morrison) in January 2009. After a relatively short Battle for the Cowl, his ex-sidekick, Dick Grayson, aka Robin, aka Nightwing, became the new Batman. Was DC copying the Captain?

After Batman’s “death” there was a teaser shot of a shadowy figure painting a bat symbol on a cave wall during prehistoric times. It turns out Bruce Wayne was merely zapped into the past and would eventually return. A few months later, Marvel launched Captain America: Reborn, a series that revealed the big mystery behind the star spangled hero’s demise: it turns out he wasn’t dead either, just zapped back into time. Was Marvel borrowing a page from DC?

“I’m positive that Grant Morrison and I arrived at our stories without any knowledge of the other one,” Brubaker told Unwinnable by email. “The minute I heard there were comparisons being made, I made an effort to steer clear of reading his Batman stuff or even finishing Final Crisis, since I’d heard we were treading some of the same ground.”

Brubaker was quick to add that he will eventually read Morrison’s complete run on Batman down the road, just because he’s a fan of the Scottish scribe.

“There’s no such thing as a truly original idea,” says Vito Delsante, manager at Jim Hanley’s Universe, a comic store in Midtown Manhattan, and himself a professional comic book writer. “The thing that has people so up in arms is that the two story-lines are in so close a proximity to each other. Do Batman dying three years from now, and no one would really bat an eye (pardon the unintentional pun).” 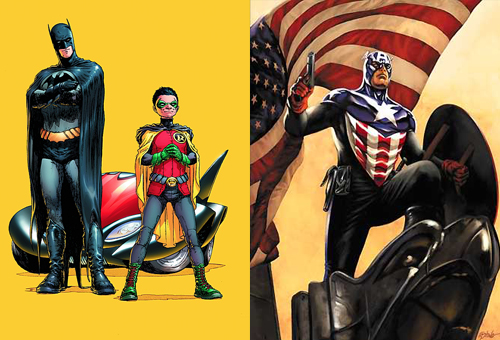 Before a single issue lands in your hands it goes through many stages: the writer types up a script; the editor takes a look and sends back revisions; after a back and forth, the script goes to the artist who does the pencils; then back to the editor for art suggestions; eventually the pages are inked, colored and lettered, edited again, converted to PDFs and eventually shipped to the printers. The average time for a single issue is four months from start to finish.

For big events that shake the comic book universes, however, much more planning is involved. Roughly once or twice a year each publisher holds major summits where the companies’ top creators brainstorm ideas. Dick Grayson was fitted for the cape long before anyone at DC had any inkling that Bucky was going to take over as Captain America, and vice versa.

That didn’t stop conspiracy theorists from cursing Marvel or DC (depending on their individual partisan preferences) on Internet message boards for the past two years.

“I dare Marvel and DC to deny that the fates of their two marquee characters are very similar. My question is why? It seems almost deliberate and that’s weird to say the least,” wrote Dante Maddox on craveonline.com last year, even before fans were fully aware of the scope of the parallels. The simple fact is that sometimes it’s as simple as the old saying, “great minds think alike.” And Grant Morrison and Ed Brubaker are two of the greatest minds in the comic book industry. For all of the parallels between their books, it’s the differences that make both runs classics.

“I don’t think anyone is stealing anyone’s bit,” says Delsante. ”In the case of Captain America and Batman, Brubaker and Morrison are two of the most imaginative writers in the business, so it might look shocking or fishy to some, but I think it’s just business as usual.”