Today Unwinnable bids farewell to character actor Pete Postlethwaite, who died in a  Shropshire hospital Sunday after a prolonged fight with cancer. He was 64.

Postlethwaite had a long career of being the often enigmatic and devious figure just outside of the main action of a film, using his distinctive looks and dark wit to create memorable characters – even if they are only seen for a moment. In portraying Keyser Söze’s bagman in The Usual Suspects and hunting a Tyrannosaurus Rex in Jurassic Park: The Lost World and pruning roses in The Town and (in what must have been a difficult role) dying in Inception to lurking in the background of dozens of other movies, Postlethwaite became an integral part of my moviegoing experiences over the last twenty years. He, and his characters, will be missed.

No matter the movie, as soon as I saw that nose and those wild eyes I would think, “Well, at least he will be worth watching.”

Most people will call his role as Kobayashi in The Usual Suspects or as Daniel Day-Lewis’ father in In the Name of the Father his best roles, but I think the absolute best Postlethwaite performance is Obadiah Hakeswill, from the British TV adaptations of the Sharpe novels. 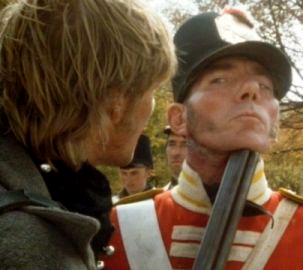 Hakeswill, for those of you who are unfamiliar, was a sergeant in the British Army who, after being hanged at age 12 for sexually assaulting a young girl, came to believe the spirit of his dead mother was protecting him from death. That belief gave him license to commit all manner of evil deeds and as a deserter, rapist and murderer, he became Sharpe’s most memorable villain (he even named his son Barabbas!), in no small part due to Postlethwaite’s repulsive but compelling performance.

His Hakeswill elicits the perfect mix of hate and pity from the audience, who roots for his death even while his tortured past makes them feel guilty for it (a similar feeling of loathing and sympathy is displayed by Sharpe himself). It is performances like that which make me grateful for Postlethwaite’s thirty-five year career and wish he had been able to give us thirty-five more.