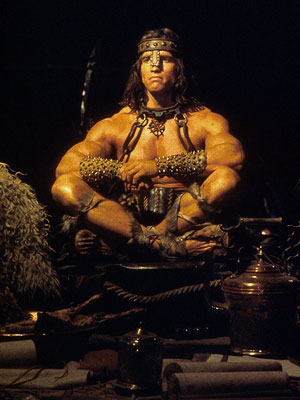 “Conan! What is best in life?”

“To crush your enemies, see them driven before you and to hear the lamentation of their women.”

Today we bid a fond farewell to movie producer Dino De Laurentiis, who died today in his Beverly Hills home at the age of 91.

To me, De Laurentiis is the perfect portrait of the old school movie producer, a man of seemingly endless energy (he produced 166 movies over his 66 year career) and a powerful creative vision that overshadowed so many of the directors he worked with.

Sadly, most of his American movies are considered schlock. Certainly there are some bad ones (Body of Evidence) and some financial disasters (Dune), but for every one of those lackluster efforts, there are plenty of movies that made a huge impact on me. Conan the Barbarian. Army of Darkness. Silver Bullet. Serpico. The Dead Zone. Flash fucking Gordon.

So many of his movies contributed to the way I separate the cool from the not-cool. Are they good in the same way we say that Hitchcock movies are good? Not at all, but they are important. Ridiculous, overblown – maybe, but when you see the words ‘Produced by Dino De Laurentiis’ in the opening credits, you know exactly what kind of movie you are in for.

Hollywood is a lot poorer for his passing.

Unwinnable’s resident film buff, Michael Sheridan, also has an obituary for De Laurentiis on his movie-centric website Tail Slate. I heartily encourage you to take a look.