On April 4, 2013, film critic Roger Ebert passed away after a long battle with cancer. His career as a critic spanned over forty years and three mediums – in print in the Chicago Sun-Times, on television with Siskel and Ebert at the Movies and on the internet with both his blog and his endlessly entertaining Twitter account. He edified a massive audience in his time and inspired countless writers to try their hand at criticism. In fact, there is no critic in the world today who had as far a reach and as much esteem as Roger Ebert. His loss is a terrible one. 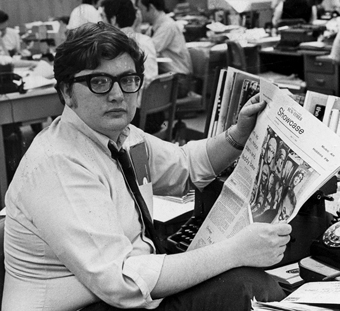 When I was a kid, I would watch Siskel and Ebert on television with my parents. It was through that show I got my first glimpses of countless genre films that would form a lifetime of cultural obsessions, from Indiana Jones to the Muppets to Mad Max and more. It was arguably the first exposure I had to the idea that things like movies were more than just things you watched – you could live them and discuss them and make them part of your life.

What’s more, Ebert was forever a font of wit and grace.  He entertained with his opinions and, even if you didn’t agree with him, you couldn’t help but respect him. When he wrote his infamous piece “Video Games can Never be Art” in 2010, the reaction from the videogame industry wasn’t the usual hate-filled internet death threats. We collectively rallied to produce thoughtful, well reasoned responses, which he gamely responded to in turn – without ever wavering. When we all agreed to disagree, it was as ideological opponents, not sworn enemies. It was a shining moment. Ebert brought out the best in us.

And now he is gone. All the projects that he laid out in his final blog post just a day before his death – including a movie based on a game – will never come to fruition. We are all the poorer for it.

I’m not 100% sure when I first became cognizant of film criticism (it probably Superman IV: The Quest For Peace, but who knows), but the first critics I remember are Gene Siskel and Roger Ebert and their TV show, At The Movies. As I grew up, I’d watch At The Movies with my folks. They trusted the critical eyes of Mr. Ebert and Mr. Siskel. I remember walking through the video store when I was 10 or so. While looking through the horror section, I came across Evil Dead 2. The skull with the creepy eyeballs called to me. I pleaded with my parents to let me rent it, but it was rated R and it was a horror movie. Being the responsible parents they were, they told me no. But then, I looked at the tape again and noticed something emblazoned on the box: “Three Stars – Roger Ebert.” I felt hope flush through me and called over to my parents. “Mom, Dad! Look! Roger Ebert gave it three stars. See? It’s a good movie. We have to watch it!” “Nice try,” my mom said as she put the box back on the shelf. We wound up renting another Siskel & Ebert favorite, The Great Mouse Detective instead.

I barely remember what most of my college courses were about. I attended the University of Texas’ “Plan II” program, an honors-ish liberal arts sub-school that had tiny class sizes and weird once-in-a-blue-moon courses. One class revolved entirely around the works of Machiavelli; another, Southeast Asia. I tried the weird durian fruit for the first time in the latter. I was the only student to love it. 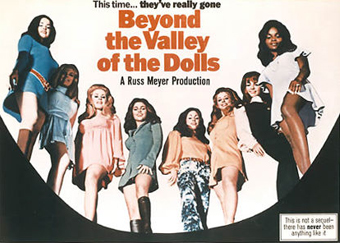 I never took a film studies course, but I did have a class – geez, I cannot remember what it was about, philosophy? Cultural studies? Logic? Whatever. I’m an old man now. Point being, we watched movies during this class’ TA hours once a month. That’s where I first saw The Warriors, Breathless, and – perhaps most importantly – 1970’s Beyond the Valley of the Dolls. I wasn’t a film geek as a kid, so I’d never seen anything like it. Colorful. Sexual. Giddily stupid. In love with mocking itself.

This was in 2000, which meant my only exposure to Roger Ebert up until that time was his love of thumbs and ugly sweaters. I’m not going to lie and say that his 1970 film (he wrote the screenplay, if you’re wondering) made me run out to buy his review archives in book form and pore through them. Instead, I’ll say that the feeling I had after watching that movie – and having already made a living as a videogame critic for four years – was very intense and humbling. Here was a guy who started as a brilliant creator, then successfully applied that to criticism in a way that celebrated both mainstream and artistic films to the masses.

My own student videogame, made in 7th grade in Hypercard, was no Valley of the Dolls – unless you count some incredibly innovative spaceship sequences I drew by hand – but I always think of that terrifying creative process before I pass gaming judgment. Shortly after becoming a music critic in my 20s, I started an awful band and played in front of other human beings; I felt compelled to. If you’re going to love a craft, you should try your hand at it, somehow, some way. Loving creations, loving creators, and loving yourself, all in one full circle: it’s a terrifying requirement for a fantastic job, and Roger Ebert kicked ass at it.

Way back in 1994, I was a young producer for American Movie Classics and Roger and me (heh heh) did a four minute mini-documentary (AKA an interstitial) on the importance of watching a film in letterbox. Back then, every television was square and a 4×3 aspect ratio meant something must be wrong with your four wheel drive. Roger taught me the importance of doing everything you possibly could to see a film the way the director originally intended. He showed me laserdiscs, my reflection glowing in the 12” disc. We viewed films side by side, letterboxed and pan and scan and he was so enthusiastic, jumping up to the screen, stab pointing at the portions of the pan and scan where the film had been cut off. It was only a two day shoot and a four day edit, but in my time spent with Mr. Ebert, I learned as much about film as I did in four years of college.

I know many of my peers, family and colleagues write because of Roger Ebert. He was a big influence on me and my writing as well. I saw a quote today that went something along the lines of, “A film critic with the soul of a poet.” I think that’s perfect; he showed masses of people that films were truly art and how deeply important they were to our culture. His language and points were always clear and he made critical writing beautiful, so much so, that he was the first Pulitzer Prize winner in his field. Ebert will be missed, but certainly not forgotten as his voice, his essence, will be found for years to come in the writings of those who looked up to him. Two thumbs up Roger; rest in peace. 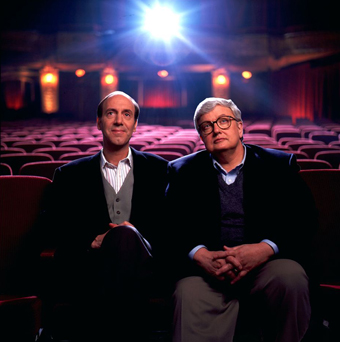 I don’t know Roger Ebert, never met him and don’t have any strong memories of his shows or reviews. In fact, the most time I’ve spent reading about him was when he made the ludicrous statement that “video games can never be art.” In fact, my favorite Roger Ebert moment doesn’t even include him at all, but rather takes a playful swipe at the man. It comes from John Carpenter’s awesome 1988 film They Live (you know, the sunglasses movie with the ‘chew bubblegum and kick ass’ line). Near the end, as Roddy Piper’s Nada destroys the signal tower that was cloaking the yuppie ghouls the whole time, a fantastic montage slowly unravels just how pervasive the ghoulish aliens had been able to get into our society.

This is exemplified by a depressed bar ghoul glumly watching ghoul news anchors on the TV, while everyone else freaks out around them, but my favorite moment is when, camera holding fast on the television after the news-ghouls are found out, the channel switches to an uncanny one: a Siskel and Ebert at the Movies, only with the two eponymous critics as ghoulish monsters. Ebert’s back is to the camera, but we can see ghoul-Siskel drone on about how “filmmakers like George Romero and John Carpenter need to show some restraint.” Carpenter, who had to know that both of them favorably reviewed his horror masterpiece Halloween, here gives them a loving little nod with his playful little jab. I love They Live, I’m a huge fan of John Carpenter, and if he liked Roger Ebert enough to poke fun at him, well, then the guy must be OK in my book.

It’s sad news to hear that Roger Ebert has passed away.  While I didn’t always agree with his film criticism (sometimes wildly so), there were times where he was so right I re-evaluated my opinion on the movie in retrospect. Mind you, this was in the late 80s and the films in question were the ones I really cared about, like Indiana Jones and The Last Crusade, Ghostbusters 2, Batman and the later Back to the Future movies. Reading these syndicated reviews in my local paper every Friday became a tradition and in the process I was introduced to film criticism, as well as to film in general.

I owe a lot of my love and obsession with movies to Roger Ebert, because without his succinct and often entertaining reviews the seed would have probably never been planted that it’s OK to be passionate about the oftentimes bountiful joy of film, and even make a career or hobby out of it. Whether it be a masterpiece like The Godfather films or a stinker like North, Ebert was my introduction to enjoying movies not just as something you eat a tub of popcorn to. If it wasn’t for Ebert championing cultish genre films like Dark City I never would have never even checked them out. Directors like Welles, Kurosawa, Kubrick and Altman would just be names in the credits if at a young age I didn’t read about them as often imitated trailblazers in Ebert’s reviews.

I know many others feel the same way, especially those of us who grew up in the 80s with his newspaper reviews and watching At the Movies with him and Gene Siskel.  If there’s a movie you love or hate it’s most likely been reviewed by Roger Ebert. Check out the vast archive over at rogerebert.com and enjoy criticism by a passionate journalist who also happened to have a great love of films. With the proliferation of the internet criticism of everything it’s sad to say that the passing of Ebert is the passing of an era, as the quality criticism becomes harder to find. Not only that, but it’s a reminder that the days of me opening the movies section to a Roger Ebert review Friday morning with my coffee and cereal are long passed.

American Movie Classics, At the Movies, Beyond The Valley of the Dolls, Evil Dead 2, Gene Siskel, John Carpenter, Roger Ebert, They Live, Video Games can Never be Art