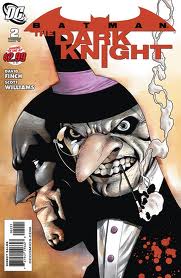 Parts of this comic work very well, especially for Batman. The main story involves Killer Croc and Penguin, and while I enjoyed the very . . . painful . . . interactions between Cobblepot and Batman, I was disappointed by the traditional kidnapping plot involving Bruce’s childhood friend, Golden Dawn. It’s reminiscent of Christopher Nolan’s The Dark Knight, specifically the Joker kidnapping Rachel Dawes. And while Batman’s interrogation of the Joker in the movie is stunning, here his attack on the Penguin isn’t nearly as interesting, and I can’t exactly say why. I like how Bats loses his shit and starts attacking his enemy, but something about the overall plot doesn’t work. It could be Scott Williams’ art which is great, save his Penguin. Williams draws Oswald a little too cartoonish. I was more disgusted than impressed (which might have been Williams’s point). The sub plot — involving some kind of beast murdering bums in Gotham — is much more interesting. The cameos are fun to see, and I’m definitely intrigued enough to keep wanting more from this series. Finch writes a great Batman, so there’s no failure on his part in translating the best aspects of the character to this new series. I’m just not as overwhelmed as I think I should be 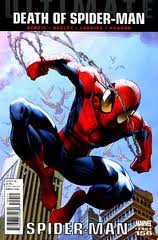 Bendis seems intent on destroying Peter Parker’s life. I know the series is titled The Death of Spider-Man, but I don’t think this will end with the lifeless body of a fifteen year-old laying in a pool of blood on some ruined Manhattan street. I think it will end with Peter stepping away from the vigilante roll because he fears for his family’s safety. Bendis has been working the familial angle for a while, returning Gwen Stacy to Peter’s life, as well as having the Iceman and Human Torch living with Aunt May. Plus, Peter and Mary Jane are back together again, so you know Bendis is pulling at your heart strings. Long story short, Peter’s enemies have returned — full force.

The first act of the comic bases itself on Captain America trying to teach Peter how to be heroic. He tells Peter, “You don’t fight smart and you don’t fight like your life depends on it.” Bendis is beating the readers over the head with his foreshadowing, so I think we can assume that Peter’s demise will be because of his inability to do these things. But, if Peter dies, I will be very, very sad, because I’ve enjoyed almost every issue of this series. I know some people don’t like Bendis, but I find the guy’s stories continuously enjoying. Ultimate Spider-Man redefined Spidey for a new generation, one that had become stale, tired, and convoluted. The new takes on old characters really made the series take off, and while Bendis’ dialogue can drag at times, he’s never at a loss for a spectacular conclusion. I’m sure Ultimate Spider-Man will be the same. Plus, if the series were to end, it would end on a high note. There are worse things to hope for. 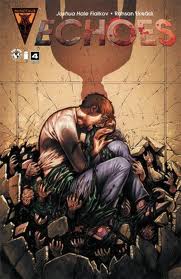 I love this series. Echoes is about the proverbial “Sins of the Father,” as the main character, Brian Cohn, deals with his father’s deathbed confession to being a serial killer. Brian is struggling with his own demons, taking medication for schizophrenia, trying to deal with a pregnant wife and a grasp of reality that is slipping between his fingers at an alarming rate. I won’t go in to detail here because to do so would be to give away a HUGE reveal. What I will say is that Joshua Fialkov knows how to write streamlined stories, and Rahsan Ekedal’s art and panel construction only helps that. Ekedal captures character emotions, especially through facial features — wide, frightened eyes, grimaces of pain, looks of insanity — and even decaying bodies that follow the main character around. Please read this series!! More people need to experience this kind of writing, and appreciate this kind of art. I grabbed this series on a whim, impressed with the pencil work on first look and then was taken with the vulnerability of Brian Cohn. Maybe I’m just a sucker for father/son stories. Either way, Echoes hits all the right tones. 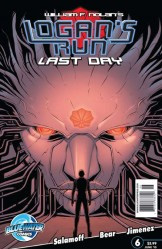 I have to preface this review by saying that I have never read the Logan’s Run novel, nor have I seen the movie adaptation. This turned out to be a blessing because I was able to enjoy this series on a completely different level. From my view — as an ignorant reader — I felt for Logan, and was moved by his struggle to live. I bought the love story between Logan and Jessica, and rooted for them, hoping the series wouldn’t end with Logan’s death. I won’t go on say whether or not I was disappointed, but I will say that this issue did everything it was supposed to do. It was a typical climax. There are gruesome fights, character deaths and major explosions. Everything Paul Salamoff was building up to is realized in this issue, and it’s spectacularly achieved. My only complaint about the series is the loss of Danile Gete. His art perfectly complements the futuristic world in which Logan’s Run takes place. There’s a sleekness in Gete’s art that countered some of the more violent aspects of the story. To go from Gete to Jacob Bear is visually jarring. Jacob Bear’s art is messy and crude, nowhere near as streamlined and polished as Danile Gete’s. I hope Gete comes back for the next arc, Logan’s Run: Aftermath. I think these two were made to work with each other. If you haven’t read this series, get a copy of the trade when it comes out. I enjoyed the hell out the story, and think you will too.

Every week Brian Bannen scours the comic stores for the very best of the over-saturated comic book industry to find the gems for you, follow him @Oaser

Coffee Break from Beyond!