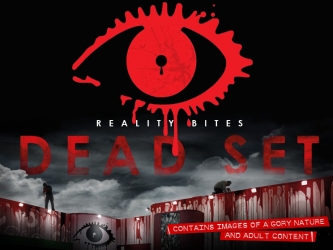 The zombie infection that’s bitten many of us doesn’t seem to be dying down any time soon.  The newest chapter in apocalyptic storytelling is AMC’s The Walking Dead.  While I’m chomping at the bit every week just to see the latest episode, The Walking Dead isn’t the first TV series about zombies. In 2008, Dead Set appeared on TV in the UK.

I have seen the DVD of this show grace the tables of numerous bootleg vendors at Chiller Theater and other science fiction and horror conventions over the last three years.  Every time I saw it, I would pick it up, scan the back cover, think about buying it and then put it down. If you have ever bought bootlegs or burned DVD’s from a vendor at a show, then you know that there’s a good possibility that the movie you just purchased could be utter garbage. This is why I was never able to see this show, until now.

Earlier this month I caught the first episode of Dead Set on IFC and set the DVR to record the next four.  I’m now kicking myself for never buying the DVD years earlier.  This is one of the best zombie movie/show I have ever seen!  Dead Set is completely riveting.  It borrows its zombie philosophy from 28 Days Later by having their zombies portrayed as “runners”. The show contains plenty of homages to George Romero and some of the best gore I’ve seen on a T.V. show or film.

The premise of the show surrounds the filming of the popular UK reality show Big Brother. As the day to day lives of the residents of the house is filmed for the show, a viral infection breaks out across Britain.  The infection makes its way to the studio and wipes out most of the production staff. The roommates are left alive in their studio home along with the T.V. show producer and a production assistant. By the time everyone figures out what’s going on, it seems to be too late. One of the best scenes involved the producer, who is less than charming (think Captain Rhodes in Romero’s 1985 Day of the Dead).

Before you finish up the season of The Walking Dead, tune in to Dead Set and find out there is no escape!