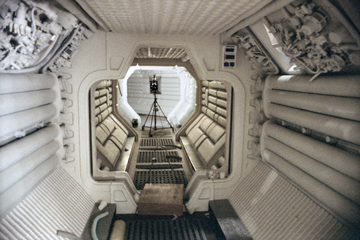 The Facility: a place of sterile environments, long hallways, specialized equipment and fluorescent lights. Doors open and close with the hiss of automation. Sometimes, the central computer system will speak to you in an emotionless voice.

Inevitably, these secret places of scientific pursuit will suffer a breach. The brilliant people who labor there will fly too high and suffer for their hubris. Let me count the ways: Portal, Lost, Alien, Doom, Moon, Half-life, The Thing, et cetera.

An environment constructed for efficiency within strict space constraints is, by its nature, highly ordered and secure. If you introduce chaos into that system, whether it is a space ship or an arctic research station, the potential for isolation, paranoia, fear and disaster become apparent immediately and grows exponentially.

Unfortunately, the potential for boredom is just as great – that is why, as the blast doors of the CDC opened and flooded the survivors of AMC’s The Walking Dead with a wash of blinding white light last week, my heart filled with a dread that had nothing to do with flesh-starved undead. 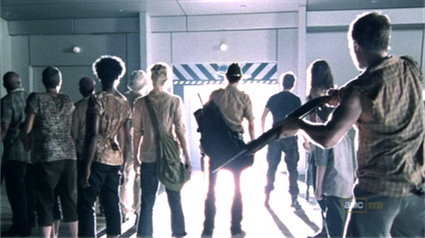 Thanks to George Romero’s mediocre Day of the Dead and the ridiculous Resident Evil franchise (both the videogames and the movies), I can’t help but think that it is only a matter of time before any given zombie story winds up inside a lab. Unlike other types of horror, zombie stories don’t go to a facility to promote claustrophobic terror, they go to give me an explanation I don’t care about.

The scenes from zombie movies that made the deepest impressions on me are all outside and all about keeping on the move: the gas station scene in the original Dawn of the Dead or the attempted rescue of Andy the Gun Guy in the remake or the tunnel scene in 28 Days Later (I am already aware that they aren’t technically zombies, thanks, no need to correct me in the comments). They are scenes about necessity, desperation and the drive for survival even in the face of a hopeless situation.

Meanwhile, the whys and wherefores of a zombie apocalypse are uniformly uninteresting. Wrath of god, virus, alien parasite, yellow musk creeper, military experiment – the only things that changes with the origin of the outbreak are the variations in how the zombies act and how the infection is transmitted, things that can easily be explained elsewhere. It doesn’t change that fact that the world is effed. No, the only thing this kind of narrative detour usually tells me is that the writing team is too in love with their own mythology.

The Walking Dead finale shambled into that minefield but, by some miracle, managed to shamble out without blowing its legs off. 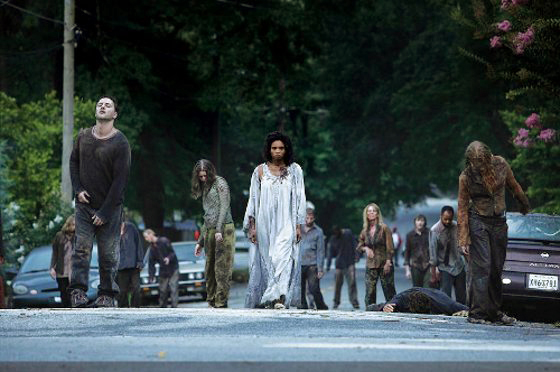 It was a nerve-wracking trip and the easy comparison between the introduction of Dr. Jenner in the previous episode and the introduction of Desmond in the beginning of the second season of Lost did little to inspire confidence (the heartbreak of watching Lost‘s spiral from being smartest show on television down to the stupidest is still too fresh).

We did indeed get a vague explanation of how the infection works (yawn) and flashes of that old gag about human beings worse than the zombies (zzz). But what we also got was an anxiety-filled allegory for shutting down in the face of adversity – as the CDC closed itself off from the world, so too did some of the survivors, but whether they laid down in acceptance or defeat is left up to the viewer to decide.

Most of them, however, fled back into the wide open world, where a zombie story of this scope can truly shine. And the facility? A smoking ruin, just as it should be.

Let’s just hope it is the last time Walking Dead flirts with disaster.

Addendum: The Walking Dead finale may have dodged the bullet with the CDC situation, but that doesn’t mean it gets a pass for its other bullshit maneuver.  Having a important scene in which one character whispers in the ear of another character but with no audible dialogue isn’t a clever way to creating a talking point for a cliffhanger finale – it is lazy and insulting. Bad enough audiences have to wait nearly a year for a new season, jerking them around with cheap narrative tricks is just salt in the wound.