What makes a horror movie good? You could say a lot of it has to do with plot, cinematography and direction.  However, many of the iconic moments in classic horror movies are related to the music. At the heart of it, music is effective at evoking moods, and the mood of horror classics like The Exorcist, Halloween, or even Jaws would’ve been completely different were it not for Mike Oldfield, John Carpenter and John Williams.

One of the acknowledged masters of horror is Italian director/producer/screenwriter Dario Argento.  A great many folks would probably agree that the music for his giallo films Deep Red, Suspiria and Dawn Of The Dead play a huge part. All three soundtracks were done by an Italian progressive rock band (prog rock?! SCARY!) formerly known as Cherry Five, but who changed their name before recording the soundtrack to Deep Red to a more appropriate name given their newfound horror connection: Goblin.

I have to admit that before I sat down to write this article I felt a sense of dread. Not because of the subject matter, but because of the lack of intimate familiarity with the topic. I like movies, but don’t watch horror films, mainly because I don’t like to be scared. Poltergeist was the first horror movie I was allowed to see, probably because it was rated PG. Big mistake, Mom and Dad!  It scared the ever-loving crap out of me and I cried until my parents shut off the TV. To this day, the only horror movie I will watch is The Shining and that’s only because I like Stanley Kubrick. Likewise, while I’ve made no secret that I love progressive rock; Italian prog is a subset of the whole that I am largely unfamiliar with. Of the 1800 CDs I own, before this article only two were Italian prog. So, rather than follow the cliché of the stupid teenager going into the darkened room unprepared for what’s behind the door, I enlisted the aid of my good friend Bill Knispel of Bill’s Prog Blog to help me understand Goblin’s place in the pantheon of Italian progressive rock:

“The big bands [of the Italian prog scene] were very, very political. PFM, Banco del Mutuo Soccorso and Le Orme all wrote albums that touched on some serious political, sociological and religious issues. Goblin were essentially a rock ‘orchestra’ writing film scores. That was their area of interest, and they did it very well. There really wasn’t a British analogue of that band. Dark, dramatic but also symphonic; they had the darkness of King Crimson with the keyboard driven sound of Emerson, Lake and Palmer, but they were a uniquely Italian band in just about every way.” 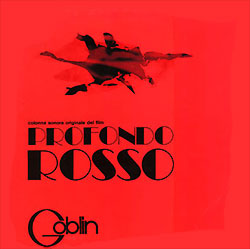 The first of Goblin’s collaborations with Argento was the 1975 film Profondo Rosso. Due to technical limitations of the LP medium, the original soundtrack released in 1975 was heavily edited from Simonetti’s original vision for the album. Thankfully, a remastered, expanded edition of the soundtrack was released by Cinevox records in 2000. While Italian composer Giorgio Gaslini is also credited with music, with the exception of one track where Gaslini conducted Goblin (“Mad Puppet”), Gaslini and Goblin wrote and recorded their songs separately. As a result, what you end up with is a compilation of orchestral tracks and rock tracks. Very rarely do the two combine, and when they do Gaslini’s orchestral score takes center stage. Interestingly enough, “Mad Puppet”‘s guitar parts sound not like Yes or Genesis, but Led Zeppelin; the main theme of the song borrows a little bit from Zeppelin’s “Moby Dick”, and the guitar sounds a bit like what Tomoyasu Hotei would do 25 years later with “Battle Without Honor Or Humanity” from Kill Bill (the song from the trailer).

Goblin’s performances on the soundtrack combine a handful of fully realized instrumental pieces with short jams that sound more like jazz than rock. The confusing part is that multiple different tracks share the same title. Case in point: there are six different tracks entitled “Profondo Rosso”, only the first of which is a full song.

As a soundtrack, had I not known that Profondo Rosso was a horror movie, I might not have guessed it based on what I heard. “Profondo Rosso” (track 2) has a keyboard line reminiscent of Mike Oldfield’s “Tubular Bells” (another prog rock album that was used as a horror soundtrack, this time The Exorcist), but for the most part the album itself is a disjointed collection of jazzy prog rock instrumentals. It’s right up my alley, but unless you’re already a prog head, or really loved the film, maybe this isn’t an essential purchase. 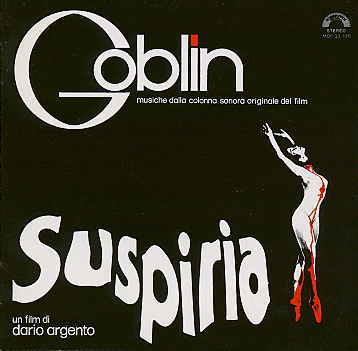 Often considered Argento’s high water mark (it’s namechecked in Juno), Suspiria was the first of what he called his “Three Mothers” trilogy, preceding 1980’s Inferno (scored by prog rock legend Keith Emerson) and 2007’s Mother Of Tears (also scored by Simonetti). This would be the first time Goblin would work on a film soundtrack without additional collaborators. Ironically enough, while the music was written and recorded before the film, it is this soundtrack, more than the others, that feels more unsettling and befitting a horror film. From the opening title track, a song whose awesomeness even noted prog rock haters Pitchfork Media can’t deny (they named the song to the Pitchfork 500), the mood is set. Otherworldly sound effects and cacophonous synths abound, though they are used to their greatest effect on “Sighs”.

Of the three soundtracks Goblin did for Argento, Suspiria’s is also the one that works best as a standalone album. The instrumentals are all well-crafted, are short enough to not scare people into thinking it’s purely a prog rock album, and span a range of instrumentals from jazz to rock, with the occasional tympani flourish. It is perhaps a testament to the excellence of this album that the music has been reused and sampled on many occasions, from South Korean martial arts films to raps by Ghostface Killah to episodes of Invader Zim.

ZOMBI (aka Dawn Of The Dead) 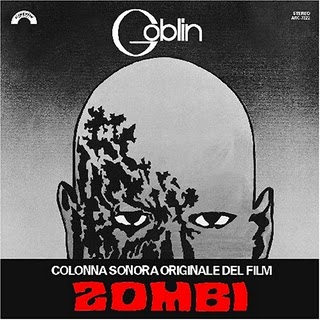 This may be the least known of Goblin’s Argento soundtracks, because it was only used in the international version of the film, and because Argento was only a producer, and perhaps was only given producer credit because he was able to secure international distribution for George Romero’s film. It is also the most diverse of the three soundtracks, with songs that draw from world music (“Safari”), heavy metal (“Zaratozom”), ragtime (“Torte in Faccia”), and a bizarre hybrid of classical guitar and Coplandesque orchestral parts (“La Caccia”). The music isn’t particular bad, but it doesn’t hang together as well as an album. The diversity of the material makes the whole thing disjointed, and none of the tracks give the impression of being part of a horror movie, nor do they pack the absurdity of the American version’s closing number “The Gonk”.

For fans of Goblin’s soundtrack work, I can also recommend the two proper albums they did during the same time period: Cherry Five, their self-titled debut album before they changed their name, and the all-instrumental Roller. All five albums are available from Amazon in various formats and, in the case of the three soundtracks, with bonus tracks aplenty, but the eagle-eyed shopper can find the physical CDs cheaper at Laser’s Edge.

Striking Back At Reality TV