The zombie apocalypse is almost upon us – and it’s about time.

With Sunday’s premiere of The Walking Dead on AMC – appropriately on Halloween night – the hordes of the undead are finally shuffling to their rightful place at the top of the horror food chain. 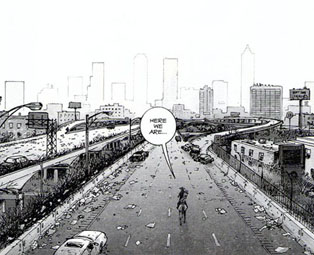 But the scary thing is that the best zombie fiction is steeped in real fears: George Romero’s Night of the Living Dead tapped into the audience’s unease over nuclear contamination; his Dawn of the Dead tapped into American society’s rampant consumerism. (Then again, his more recent Diary of the Dead mined our fears that Romero didn’t know when to stop beating a dead horse, so to speak.) The “rage disease” that births the zombies in 28 Days Later and its sucktastic sequel 28 Weeks Later seems plausible as we read the headlines about mysterious fast-moving sicknesses like swine flu.

So at some point, whether it’s because our brains are fried by reality TV or some previously unknown microbe crawls out of a rat’s anus and infects us all, we need to be prepared for the off chance that this could happen to us.

Fortunately, as a service to our readers, Unwinnable called on some of the world’s foremost experts on zombies. When they wouldn’t answer, we moved on and picked the brains of some other people. The result: our primer on how to survive in a world dominated by zombies:

1) Ignore everything “vampire” books, TV series and movies have taught you about the undead in recent years. Unlike the bloodsuckers that dominate Twilight and True Blood, zombies aren’t whiny metrosexuals who woo beautiful women and lament their curse. You can only stop them with an axe to the head, not an unkind word aimed at their heart, Sookie Stackhouse.

“It has nothing to do with cuddling,” Robert Kirkman, who wrote the comic on which The Walking Dead television series is based, told this reporter during an interview for the Daily News. “There’s no tension of which zombie I’m going to make love to.”

But if you still can’t help yourself, for God’s sake use protection.

2) “Find a good hiding space or better yet a good getaway vehicle,” says actor Stephen Yeun, who plays Glenn on The Walking Dead. “I am good at holing myself into places, so I think I would last awhile,” says Yuen. “Somehow, I’m somewhat lucky. I have parking karma, which is nice, and you never know how that might [manifest] itself in a zombie apocalypse.”

Anyone who uses “parking karma” in a sentence deserves to be eaten.

3) It took us days to track down horror master Tom Savini, who studied make-up and special effects under the wing of Romero himself. His sage advice? “Run.”

4) Finally, horror comic book scribe Steve Niles had the best advice of all: “The key? Don’t fight. Wait it out. Eventually zombies rot away.”

So if you need us, you can find us in the Unwinnable bunker, where we’ve stocked up on canned peaches, beer and a generator to run our high-definition 48-inch TV set on Sunday night. We’d advise you to do the same.

Trick r’ Treat Is Back. Just Not On the Screen.
Previous Post

Houdini: In The Shadows of the Leviathan