I work at home. Three feet away from my desk sit a 12″ VHS combo TV from 1992 and several outdated consoles. Two, maybe three days a week I play a game on my morning break. Some times I play a familiar favorite, other times a game I’ve barely heard of. I might start from the beginning or load up an old save file. Occasionally I write about them for Unwinnable. It’s not about nostalgia or some naive notion about the “purity” of old games. It’s also not just about having fun. I want to see how these different games from various times fare against both their contemporaries and the games of today.

It’s time I made it to the top. 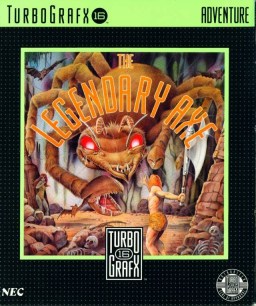 I. I didn’t own Legendary Axe until 2009, but it’s one of the main reasons I sold my NES and GameBoy for a Turbo-Grafx in 1990. VideoGames and Computer Entertainment, the best gaming magazine on the market for 13-year-olds too pretentious for GamePro or EGM, called Legendary Axe the best game of 1989. That, combined with Devil’s Crush and Splatterhouse, two games that appealed to my then-nascent love for heavy metal imagery (a love that peculiarly did not extend to the music itself), convinced me to side with NEC over Sega in the 16-bit wars. The Turbo-Grafx 16 might have finished a distant third when the dust settled, but I’ve never regretted the choice.

I have no idea if Legendary Axe deserves its game of the year award. I know it’s not better than the NES version of Bionic Commando, because no game is, but that apparently came out in 1988, despite it never entering my house until the middle of ’89. I do know that playing Legendary Axe is fairly simple: you run right and hack ‘til nothing is left.

II. Legendary Axe starts with bats. They fly in parabolas like the decapitated Medusas that thrive in Dracula’s many castles. At the bottom left of the screen is a caveman, or Tarzan, or some kind of shirtless, shoeless, loin-clothed savage with long, unkempt hair. Whatever he is, he’s got an axe and a tiny strip of modesty-preserving fabric to his name, and nothing else. Some of the bats stray directly into him, others fly harmlessly above; all take only a single blow to evaporate.

At the top of the screen are ten red squares that represent the shirtless guy’s breaking point. If they’re all gone then so is he. Above 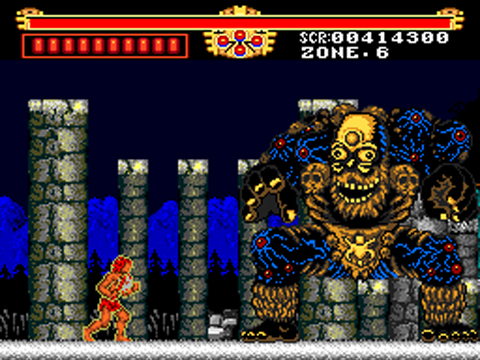 that is a long golden bar book-ended and underlined by vaguely Aztec-looking symbols. In the background is the jungle that surrounds our hero, with untouchable vines dipping down from lush trees. The system’s not-quite-16-bit power delineates the environment more cleanly and crisply than the abstracted shapes found on the NES. It might not match the large, bright sprites of the Genesis version of Strider and its mighty eight megabits, but Legendary Axe also doesn’t flicker like a flip book.

Shirtless Guy is a world-class athlete who can do exactly two things: jump and swing his axe. After destroying a few bats he quickly runs into a bald Cyclops sporting a brown leather miniskirt and a much bigger axe. It makes Shirtless Guy feel inadequate. The Cyclops is hesitant, slow to strike after running straight forth from the right. He’s easily slain despite his out-sized head and weapon.

After the Cyclops lie a wide chasm and a rope perfect for sliding into a mysterious dark pit. A giant spider appears when Shirtless Guy reaches the bottom, with a loud whoomp letting us know exactly where it is. It shoots balls of painful webbing that fan out in bursts of three and four. Shirtless Guy dodges them easily while jumping and whittling limbs off the spider, which drop to the ground below before blinking and disappearing.

Eventually the spider falls and two golden emblems appear where its corpse evaporates. One looks like the mask of Agamemnon, the other like arrow fletching. The mask fills a quarter of the golden bar at the top with a glowing line that pulsates from purple to red and back again. The fletching places a red orb inside one of four circles in the middle symbol. It’s not evident what impact any of this has upon Shirtless Guy, his trusty axe, and their mutual interest in wiping out every vestige of jungle life.

After the spider, Shirtless Guy must make a choice. He can climb out of the pit on a ladder made of bone, or explore deeper into the cavern. He stays underground, continuing his personal vendetta against ancient cultures by shattering a series of statues. This destruction brings him 100 points, another piece of fletching that produces a second red orb, and a blinking red ball that refills his health meter. The Taliban found the exact same stuff when they blew up the Buddhas of Bamyan. A dead end prompts Shirtless Guy to return to the bone-ladder and climb above, where he’s greeted by more ineffectual Cyclopes.

Attacking these monsters elicits new questions about the bar at the top of the screen. With each axe swing the purple-red glowing portion of the bar darts to the left, momentarily revealing an undercoat of green before replenishing itself. Is it related to the strength of the axe? Maybe this nameless vagabond, traveling half naked through a jungle, is now more resistant to Dengue and helminthes? Or perhaps the bar exists solely to distract us with its bright shininess? 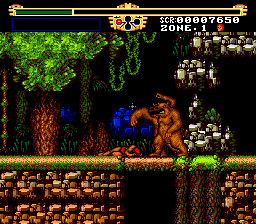 Once the Shirtless Guy leaves the pit and dispatches the latest squad of brown-skirted Cyclopes, he comes face to face with the deadliest jungle creature yet: a green-skirted Cyclops. The green Cyclopes are stronger than their brethren, with powerful legs that propel them on inhuman leaps. The monster repeatedly jumps over the Shirtless Guy, at one point knocking him back down into the spider’s pit. After recovering the high ground and recognizing the leaping Cyclops’ pattern, the Shirtless Guy makes quick work with a few strikes of his axe.

After a few more steps towards the right Shirtless Guy encounters a final challenge. A tandem of surly bears approach from either direction, trapping Shirtless Guy between their scalpel-like claws. The bears are obviously serious because the music changes. Their theme is a fast, bass-heavy groove. These beasts are so confident that they don’t waste time devising a defense; they mercilessly press in on Shirtless Guy and take ever blow he offers directly to the chest. Their lack of strategy is the bears’ undoing, as the half-naked hero’s speed overcomes their brutal frontal assault. The bears erupt into fireworks after a dozen or so good thwacks apiece and Shirtless Guy’s score increases dramatically. The lights go out and purple text on a black wall reads “YOU CLEAR FIRST ZONE; LET’S TRY SECOND ZONE. FLARE IS WAITING FOR YOU”.

III. Legendary Axe isn’t revolutionary, even by 1989’s standards. It’s a typical hack’n’slash side-scroller in the vein of Rastan or early Castlevania. It’s defined by arbitrary limitations that are little more than vestigial remnants from the arcade era, like lives and continues, but it’s foolish to condemn a game for being too of its time. Though Legendary Axe might feel as vibrant as a 78 RPM record to the younger set and its nostalgic value to older fans diminished by a general lack of interest in its native console,  Legendary Axe has kept me enthralled throughout my break. The simple challenges – ducking, jumping, striking – reflect the elemental action-oriented appeal of video games, while the increasingly unsimplified enemies and level design ensure that the challenge persists and deepens as the game progresses. That’s basic game design, then and now and yet many games don’t have a firm grasp on those fundamentals.

Nostalgia cripples me almost every day. I’ll hear a song or catch a second of a TV show and spend twenty minutes stuck in the past. That doesn’t happen with video games. Sure, I downloaded Adventure for my otherwise empty Game Room purely out of nostalgia, but once I start playing I’m completely focused on the game itself and not my history with (or without) it. I don’t have a history with Legendary Axe, but that wouldn’t prevent me from spinning off into a 1989 reverie if it were a movie I’d never seen, or period photographs of complete strangers. Games don’t age as gracefully as music or movies, and yet in a way they’re timeless. Legendary Axe is proof of that.