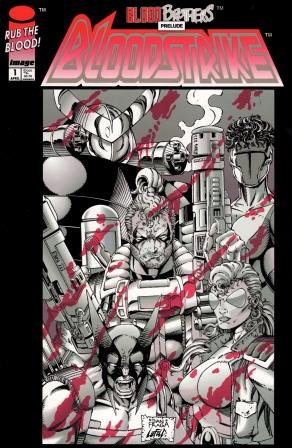 Superman was not Superman and Batman was not Batman. The only super hero I could get into was a hell-born baby brought to our world by a mad monk. It was the 1990s and it was a dark time for comics.

It wasn’t easy being a comic fan in the 90s. The publishers inundated the market with stupid (really, there’s no other word for this but “stupid”) gimmicks like Bloodstrike’s Rub-the-Blood cover or Spider-Man’s convoluted money pit, The Clone Saga. Many an artist had a penchant for big guns and even bigger shoulder pads.

A good comic was hard to find.

On the positive side, when the perpetually late inter-company crossovers and the so-called events that slaughtered heroes from the 1940s wholesale spread across the medium like a mudslide, the bright spots were easy to see.

These books kept me from quitting comics during that largely forgettable era.

Star Wars: Dark Empire
I was a pretty angsty teen (OK, fine. I am an angsty thirtysomething, too), so reading Dark Empire in my early high school years had a special meaning for me. It felt like Star Wars was going through the same changes I was. Cam Kennedy, with his gritty and moody art, portrayed that galaxy far, far away in a light I had never imagined. He took Star Wars’ generally bright and colorful world and turned it into a bleak and war-torn landscape by using a lot of grays and washed out tones. At it’s heart, though, the series was a Star Wars adventure through and through. Star Wars: Dark Empire felt like my teenage years.

The Untold Tales of Spider-Man
This series was the only accessible Spider-Man comic in publication at the time. While Spidey was facing off against a billion mentally deficient copies of himself in Amazing Spider-Man, Spectacular Spider-Man and Boring Subway Commute of Spider-Man, Kurt Busiek and Pat Oliffe delivered up a timeless Spider-Man in Untold Tales. Taking place between the panels of the Stan Lee/Steve Ditko era of the character, it featured Peter Parker in high school, living with Aunt May and getting bullied pretty much wherever he went. And still, this Peter Parker was always filled with hope and always did the right thing. Spider-Man was a hero in Untold Tales and more importantly, he was the only Spider-Man.

Legionnaires
This book came out while Valiant was pushing Jim Shooter out and flooding the market with blatant cash grabs. DC Comics decided to quietly relaunch the Legion of Super Heroes with Legionnaires. What struck me most about this book was Chris Sprouse’s art. His pencils were clean, his faces were emotive and his action was fast-paced. Legionnaires was colorful, light in tone but full of mystery! It was the exact opposite of everything going on in comics at the time. It was like 2009’s Star Trek – a future I wanted to live in, then and now.

Hellboy
Reading Hellboy and B.P.R.D. was the closest I could get to the experience of seeing Stan and Jack building the Marvel Universe back in the early ‘60s. Drawing on his interest in folklore and mythology, writer/artist Mike Mignola created a world where a demon could be raised by men and become their greatest defender. He then infused that world with a pulp sensibility influenced by writers like H.P. Lovecraft, Clark Ashton Smith and Robert E. Howard. The result is a fascinating hero’s journey that has had me on the hook since 1993.

Batman Adventures: Mad Love
Harley Quinn was created for Batman: The Animated Series as an on and off accomplice/sidekick/lover for Batman’s arch nemesis, the Joker. Mad Love was a comic created by the Batman: TAS producers, Paul Dini and Bruce Timm. Originally, the story of Harley Quinn’s origin was pitched as an episode – and summarily shot down by the Fox censors – so Dini and Timm decided to make it a comic. The result was an award-winning, damn fun Batman comic released at a time when Batman was mired in overly complex crossovers.

These books were my lighthouses. There were some other great comics at the time (Peter David’s X Factor and Incredible Hulk spring to mind) but there was far more garbage than treasure (1993 Marvel and DC Annuals, anyone?).

So, Dear Reader, what were your favorite comics of the 1990s?