Killing aliens is always fun and, at its core, that is what Alien Swarm is all about. It tells the familiar story of aliens overrunning some far off colony and, of course, no one can stop them except you, your team and a whole lot of firepower.

When I was younger, I had a computer version of Karate Champ that allowed for a two-player mode using the keyboard only. Player 1 would use the left side of the board and Player 2 would use the number pad. That kind of control scheme would be considered ludicrous today, but I didn’t have a joystick for my computer, let alone two of them, so we would huddle around the computer desk and had a pretty fun using that awkward but challenging interface. Once the WASD keys on the keyboard became the standard movement control for seemingly all PC games, those Karate Champ controls went the way of the dinosaur, along with the challenge of having to adapt and learn different control schemes for each new game.

Alien Swarm is a challenging game because it uses those now familiar WASD keyboard controls in an unusual way. What makes for the initial challenge is getting your hardwired brain to break from the idea that W is always forward and adapt to the notion that the keys work more in line with the D-Pad on a console controller. It takes a few minutes to get the hang of but it is worth it in the end.

You control a space marine in a top down shooter with gameplay elements similar to a dungeon crawl but without the loot to collect. Your main objective is that of any good space marine: kill as many aliens while getting from Point A to Point B without being killed yourself. It is a simple enough set up that is occasionally spiced up with additional small objective like setting up a turret or welding doors shut in order to hold a position. There are moments where you think you might be able to make a stand, but being an objective based game you are constantly being pushed forward.

This frenetic style of gameplay comes courtesy of Black Cat Games, the same team Valve hired to work on the Left 4 Dead series and which brought objective-based co-op multiplayer to the console. Alien Swarm is what they worked on between Valve projects and it is the remake of their earlier total conversion mod Alien Swarm Unreal Tournament 2004.

One major advantage PC gaming has over the console market is the modding community. There is almost no user created content to be had for consoles. Modders, however, have been churning out their own games for years. One of the first mods I encountered was the Alien Total Conversion mod for the original Doom. Created by Justin Fischer, it showed that if you really want a good Aliens game you needed to make it yourself and it remains unrivaled. Meanwhile, Valve is no stranger to modders; Counter-Strike, Day of Defeat and Team Fortress are all Half-Life modifications that have their origins outside of the company.

The same can be said of Alien Swarm, which is currently being distributed through Steam by Valve. What is the catch? There really isn’t one. If you have a computer, you ought download the Steam client. Even if you have only a passing interest in computer gaming, it is worthwhile to sign up with service to dabble with game demos. If you do have a computer and you are a gamer and you don’t have some version of Half-Life (preferably 2), you are missing out on a lot of fun, not the least of which is Alien Swarm, one of many free (free!) add-ons for the Half-Life Source engine. 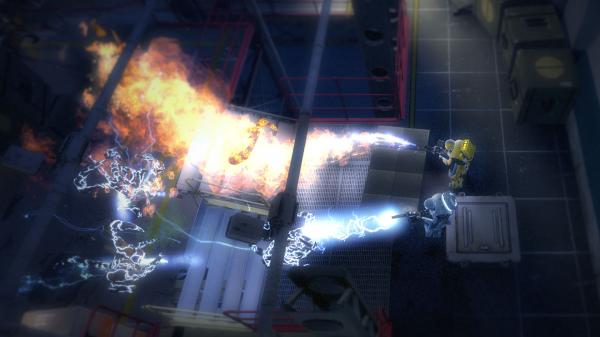 These days, it feels like every game released is the Best Game Ever Made, at least according to the gaming press. Three years from now, I’m not too sure anyone will care about Uncharted 2 or Alan Wake. Alien Swarm, however, is something special.

Born from humble beginnings in 2004 as a mod, the amateur team that made it wound up being hired to work on some of the most innovative games ever released. What do they do in their spare time? They go right back to working on a new version of that first game and then give it away free, as a gift.

Not enough companies are that close to their community as Valve has been since the beginning, but all of them should be.

Scott Pilgrim vs. Your Patience