Somewhere lost in a subworld of a subworld, a strange little bastard child of a game exists called A.L.T., a Doom II mod released in 2012 by a group of Russian modders known as Clan [B0S].

A.L.T. begins with the peculiar sight of a bloodied Doom marine in front of a door, frozen in the middle of a dying animation. A whole 30 maps later it ends with the player coming back out the other side of that door as that marine and dying. But here, in our pre-awakened state, moving causes you to abruptly take damage, and turning around reveals a very primitive version of an airplane interior guarded by…the blue SS guards from Wolfenstein 3D. This beginning is like a fever dream of the many terrible ’90s Doom levels that awkwardly tried to use the game’s default resources to replicate real-world locations. 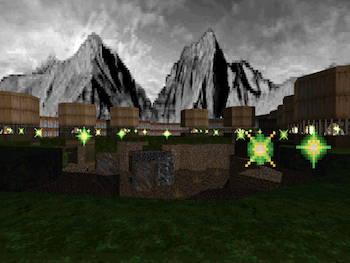 Once you fight some guards and make your way to the “cargo” area of the plane, you see some some kind of weird geometric structure that looks very out of place with the theme of rest of the map. Here things get even stranger. The very spartan readme file for the game refers to this as a portal. In-game it’s labeled “Absolut Life Transformation” or “A.L.T.” for short. And so, we have the framing device for the story – one very long, pseudo-metaphysical Twilight Zone episode.

Less than a minute later you arrive at a satanic-looking triangular passageway at the very back of the plane. When you move a bit further towards it you’re instantly teleported and see yourself and another marine moving forward in another section of the plane for only a split second before the level abruptly ends. Weird. You couldn’t exactly be blamed for not thinking much about this beginning over the course of playing the game, but it’s impossible not to notice the map design consistently, almost unwittingly, bringing you back to these moments.

The second map brings you into the game proper, and is more what you might expect of a Doom mod made after 2000 – a large, multi-layered outdoor environment. This one is littered with a lot of pieces of the crashed plane scattered about, crudely yet charmingly recreated with Doom engine geometry. There’s probably no way it wouldn’t seem like a half-baked take on Half-Life style environmental storytelling at this point, though the idiosyncrasies of the geometry and dramatic lighting sometimes poke their heads. The map is pretty linear, aside from several well-placed secrets, but the designer thoughtfully moves you through the area, even requiring you to make a leap off the top of the airplane wreckage in order to progress from the central courtyard to the perimeter cliffs surrounding the map. This map also introduces to you the monochromatic blend of browns, grays, greens and the strangely sparse large spaces featured all over.

A.L.T. seems to stumble in and out of brilliance and ugliness, but the harder you look the more it seems like it might all add up to something. The brunt of the burden is carried by Kolybenko “Azamael” Michailo, who made exactly half of the 32 maps. Azamael seems sometimes a kind of magician, constantly forging strange and unexpected beauty out of seemingly ugly environments. For example: Map 4 – “Death From Above”, an abrupt, frantic rooftop chase away from very angry Cyberdemon’s rockets. At times it has the manic energy and self-aware comedic timing of a Looney Toons episode, but its placed against a backdrop of a haunting, multi-layered city. And then there’s Azamael’s last few levels, which, no exaggeration, must be seen to be believed.

Azamael’s collaborators for the most part manage to match his weirdness, sometimes even outdoing him with maps set in locations like a freezer and virtual reality. A highlight is Map 11, “Recall,” that throws you into an enormous lava cavern with a gigantic pentagram-marked portal that gives you glimpses back into the more “realistic” environments of the first five maps, before throwing you headfirst into a gigantic apocalyptic staircase that turns into a hellscape of moving pistons, and then a confusing journey back downward through a large void filled with flaming skulls.

What’s unique about A.L.T. can probably be effectively summed up by a short encounter in Map 8 (“Psychodelia”) with some Revenants (punching skeletons who shoot homing fireballs) in a dark void. The void is a large circle with several small lit “stations” around the perimeter. This whole area is spatially connected so it appears you can move freely between them, but if you move too far out into the darkness there are invisible teleporters that will teleport both you and the Revenants to another station. 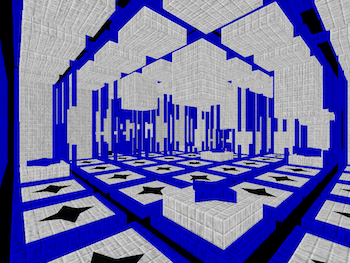 This way the Doom teleporters are used creates a unique sort of design language, and completing the area is a matter of figuring out how the teleporters work in time to kill the Revenants before they kill you. The way A.L.T. uses somewhat strange, seemingly incidental parts of the environments to correspond either to storytelling or game mechanics is truly unique. Perhaps the strangest thing about this encounter is that it comes as a little interlude in the middle of a level with a much different tone. These periodic trips back into odd, sometimes symbolic void-like areas function as sort of existential callbacks to the narrative, or reminders to the player that this all occupies some kind of liminal, indefinite space, without explicitly making the player aware this is what’s happening. (You can see this area at around 18:42 of this video.)

There really has never been anything quite like A.L.T. Part of this might be a kind of surreal, uniquely Russian mysticism that seems to emanate from the maps. Even the cartoony, empty Satanic symbolism that’s saturated Doom mods over the years almost seems to mean something here in a way that it has never before. The pacing is actually probably as good as a set of 32 levels could hope to be and, for the most part, makes you feel as if it’s building you up towards some kind of inevitable conclusion. Against all seeming odds and across different authors, the maps manage to more or less stay true to this dreamlike strangeness while still being thoughtful and navigable spatially.

Indeed, the game constantly re-purposes stock Doom textures and monsters and gameplay mechanics to create its own language and tell its own strange little tale. For this reason it may make even less sense to people who are seasoned Doom mod veterans. And that probably goes a long way in explaining why A.L.T. is not particularly popular at all: not outside the Doom community, not inside the Doom community (at least among the English-speaking major hubs). 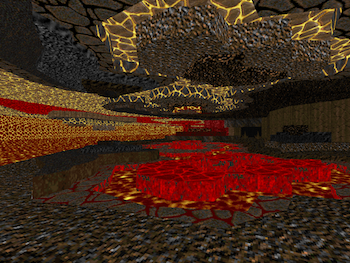 The couple playthroughs I’ve found of A.L.T. on YouTube are in Russian and average well under 200 views. Despite its ambition in scale and design, A.L.T. also missed out on a mention from the Doom community’s yearly “Cacowards” held at doomworld.com. The official post on the /idgames Doom wad archive contains several commenters lamenting its “inconsistent” and “ugly” design. It’s obvious that its creators are outsiders, and not just because of the language barrier.

And so, A.L.T. can only exist inside a niche of a niche: an obscure mod from 2012 for a game that came out in 1993. It could have been that Doom mod that only a few played but those who did ended up becoming designers – except it came probably 15 years too late. And yet, here it is. And I can only laugh that something so odd, so unique, and so fully-realized even exists in the form of a Doom mod, and that so few people will ever play it.

Lost Worlds is a semi-monthly column in which Liz Ryerson explores the landscapes of obscure videogames. (It’s also a Tumblr.) Follow Liz on Twitter @ellaguro.