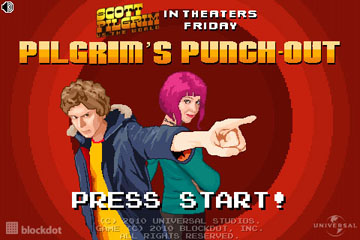 I’m just going to get this out there now: I’m a Scott Pilgrim newbie.

I just started reading the comics and I’m probably going to see the Edgar Wright flick, Scott Pilgrim Vs. The World, before I finish the series. That said, I really dig the world of Scott Pilgrim that I’ve seen so far and when I saw there was a videogame for the iPhone, I needed to play it straight away.

Pilgrim’s Punch-Out is a free iPhone game available in the App Store (it’s also playable on the iPod Touch and the iPad). Playing as Scott Pilgrim, you must fight your way through Ramona Flowers’ Seven Evil Exes in order to date her. As you’ve probably already guessed, the game is homage to the NES classic, Mike Tyson’s Punch-Out. Sadly, for me, Pilgrim’s Punch-Out has more in common with the frustrating NES movie tie-in for Friday the 13th, than it does with the original Punch-Out. What I mean to say is, it’s a pretty fun game if you can get past occasionally unresponsive controls and a horrifically difficult boss battle. 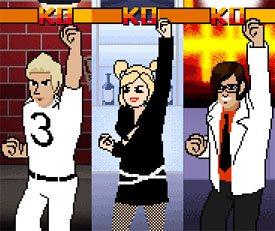 According to the game’s instructions, the controls seem straight forward. Tap the top of the screen for jab to the face, tap towards the bottom for a gut shot and hold both thumbs towards the bottom to block. Additionally, you can dodge by tilting the iPhone left or right and perform a special move by swiping your finger across the screen. Simple, right?

I noticed a lag in my first battle with Matthew Patel, the first Evil Ex, but he’s the Glass Joe of the game so whatever – he’s a punk. When fighting Lucas Lee, Evil Ex # 2, I realized the controls were going to be a problem as Lucas repeatedly hit Scott Pilgrim over the head with a skateboard while I furiously tried to block and dodge. It was the exact feeling of aggravation I used to get when Jason Voorhees would randomly show up in the woods to kill Chrissy or Mark in Friday the 13th. To say that the sluggish controls led to Scott taking a beaten more than a few times is a vast understatement.

Just like the classic that Pilgrim‘s emulates, if an Evil Ex pummels Scott, the game takes him right back to the beginning, so get used to fighting Matthew Patel…a lot. Still, once I got through an Ex, I found beating them to be marginally easier. My strategy wasn’t so much paying attention to the Exes’ moves as it was figuring out when the controls would crap out on me. It worked pretty well until I got to the seventh and most Evil Ex, Gideon Graves. 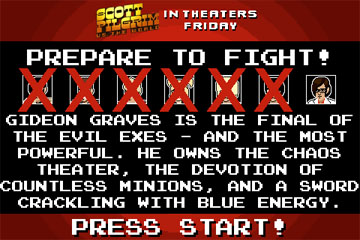 Gideon Graves is one of the cheapest bosses I’ve ever had the displeasure of fighting.  I throw a punch to the face, the controls lag and he dodges. I attempt a special move, the controls are unresponsive and Graves pummels Scott Pilgrim into the ground! I was able to get a few shots in,  but in the end, Gideon Graves was just too much of a bastard for Scott Pilgrim and me to overcome. Apparently, true love doesn’t really conquer all.

Pilgrim’s Punch-Out is supremely frustrating, but it is free, mostly playable and occasionally fun.  However, just like random encounters with Pamela Voorhees’ floating head, the game will make you want to toss your iPhone across the room.

Let’s hope the same can’t be said for the movie. 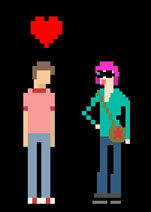