“Autobots, transform and roll out!”

The 1980s belonged to the Transformers. They had a toy line, a cartoon, a movie (Orson Wells’ last!), birthday cakes, party favors and a Marvel comic – the only thing missing was a videogame. That game took 26 years to arrive in the form of Transformers: War for Cybertron… or did it?

It turns out there was a Transformers videogame released at the height of the Transformers’ popularity. Remember Transformers: The Mystery of Convoy for Nintendo?  No, I didn’t think so. 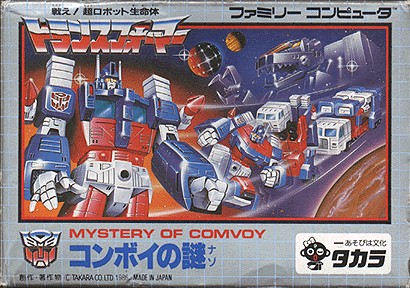 In 1986, Takara (the Japanese owners of the Transformers franchise) released Convoy for the Famicom (the Nintendo Entertainment System in Japan). The plot of the game is simple. Ultra Magnus must travel the universe to discover the identity of Optimus Prime’s murderer. Unfortunately, this proved to be a rather difficult task since if Ultra Magnus so much as stubbed his robo-toe on a rock, he died.

Convoy took place between the second and third seasons of the cartoon, the same spot as the movie. You see, Transformers: The Movie didn’t come out in Japan until 1990, so Japan’s Transfans (yes, that’s an actual term) had no idea where Optimus Prime (Convoy) went and who this Rodimus Prime was who took his place. 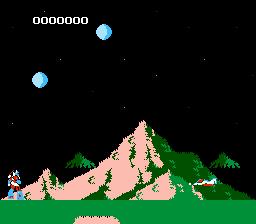 I learned about the game 16 years ago in a Transformers AOL chat room. First I tracked down a ROM of the game and later wound up getting my grubby mitts on a copy of the actual game. A few nights ago, it seemed like the time had come to dust the game off give it another go.

Let’s get one thing straight right now: the game is impossibly hard. I got Ultra Magnus killed in the first 4 seconds of the game. After about 15 seconds, I felt like I got hit by those red hate spores from the cartoon. I haven’t screamed this many obscenities since an ex-girlfriend smashed my Boba Fett Christmas tree ornament. 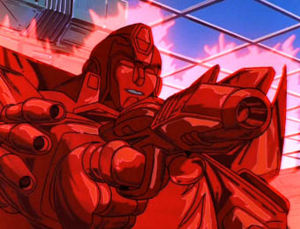 I spent years thinking the game was unbeatable. The last stage just goes in an infuriating loop FOREVER. After spending so much time playing the game (I think I logged more hours on this game than I did on Final Fantasy VII), my payoff was yet another endless stream of Starscreams and lava balls in some vague robo-city setting.

While doing research for this piece, I learned that not even infinite loops of frustration are forever, thankfully. The game is actually beatable! Thanks to a fellow named Crazy Steve, I found my way around that last stage. One must follow a painstakingly precise pattern through the last maze (a la Super Mario Bros). Unfortunately, navigating the maze is anything but intuitive.

It took me a long time to beat Transformers: The Mystery of Convoy, but I did. After all that suffering, I think I’m ready to play War for Cybertron with its slick graphics, understandable story and intuitive gameplay.

Hopefully it won’t take me another 16 years to beat.