Transformers doesn’t need to be an enjoyable trading card game. The robots in disguise are ubiquitous to the point of critical near-invulnerability, having dominated childhoods thirty years ago in much the same fashion they do today. Throughout the world, in pixels and on paper, Optimus, Megatron, Bumblebee and the hundreds of other shapeshifting android warriors will never find peace as long as they continue to reap profits, which show no signs of slowing anytime soon.

Given the long-term allegiance of the fans to this cyclical cosmic opera, it’s no surprise that Hasbro, having consumed Wizards of the Coast before the new millennium like Unicron devouring realities, would seek to combine these beloved characters with the trading card market mastery of the company behind Magic: The Gathering. But it took twenty years before Autobots and Decepticons rolled out via booster packs, and that’s because Wizards and Hasbro wanted to do a Transformers-based trading card game right. The secret was to let the individual robots shine.

The keystone for the Transformers TCG is the oversized character cards, with foil on one side of each, comprising the backbone of each player’s dueling party. Pokemon has had jumbo cards for a while, but almost always as a promotional tool  – with Transformers, the bigger cards are a requirement and a metaphor for the enormity of the robots clashing against each other. On top of that, the two sides of each card allow distinct statistical run-downs for each form of the bot – rather than having multiple cards for multiple forms, each comes complete with the humanoid battle stance and the alternate, primarily vehicular-based transformation. As separate sides of the same coin, each is slightly different in their usage – adjusted attack and defense and alternate abilities from one form to the other. 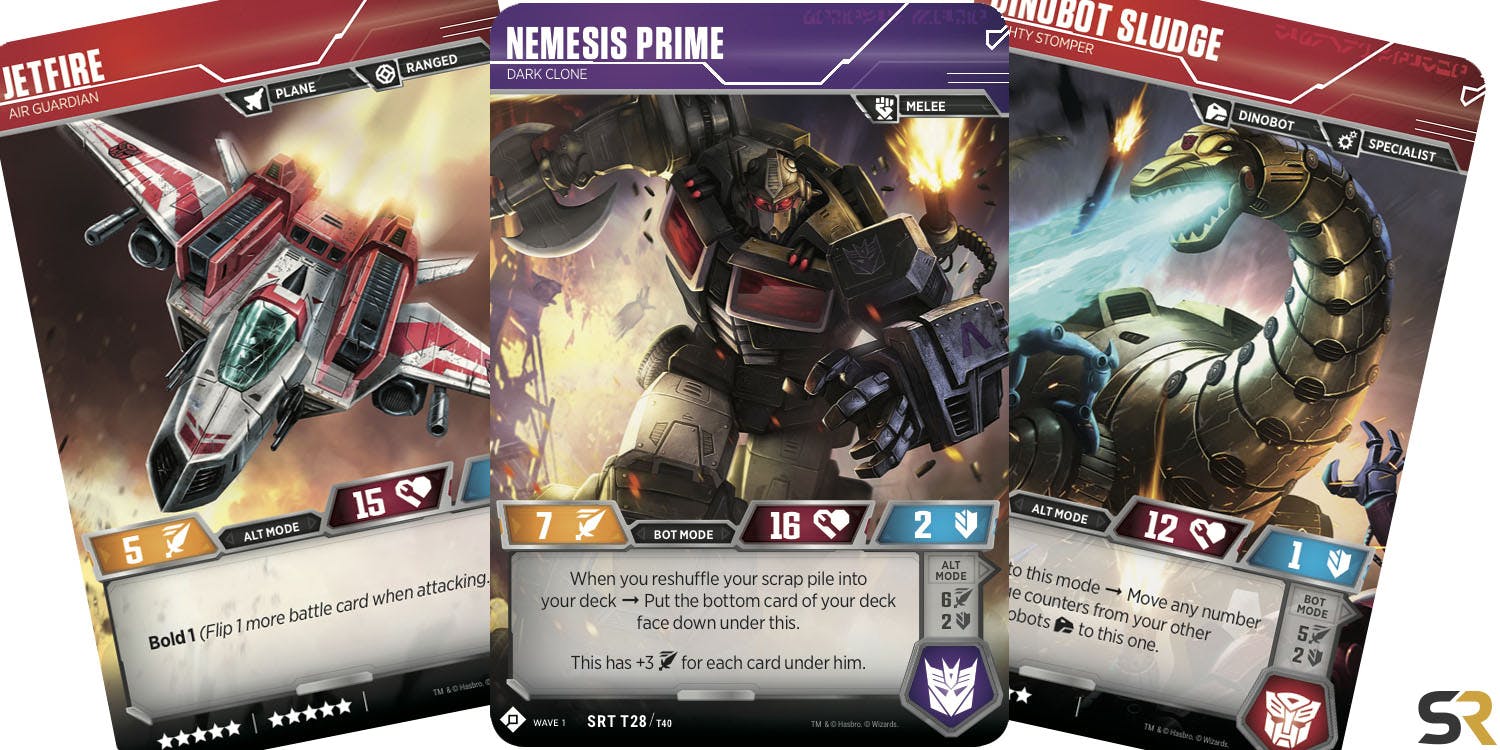 These dual-edged, titanic-sized card stock is a no-brainer. The bots are big, cards have two sides, the robots change between them. But the game itself wasn’t just tossed together, rather it was teased out over a year in development, with sixteen or seventeen iterations before the final version went to market this past September. At release, the large character cards are accompanied by smaller battle cards that constitute actions and three types of upgrades, including everything from energon axes and repair bays to the Matrix of Leadership itself. All of these cards act in support to the duel, each robot taking swings until only one side has any left standing. There’s tapping and un-tapping, War-style card-flipping for strength and defense, and damage done until defeat. Similar robot types exhibit some beneficial symmetry, such as a team of tanks, jets, or dinos, but ultimately victory rests on the quality of your combos and the fortune visited upon you by your shuffled deck.

It’s a brutal MMA card game, built upon a bedrock of characters new and old. Already there’s an alternate deck available in the form of Metroplex that outsizes the already expansive character cards. The physical space of the transformers themselves appear to be informing the design space of the game, as Metroplex has his minions swarming around him. Soundwave is absent but not for any reason other than, as a beloved minion with a variety of alternate forms that were only occasionally vehicular, Wizards wants to make sure they nail the quirks of his character through the gameplay rather than printing him up to meet demand immediately. They want to showcase these bots, from the particularly obscure like Flamewar to the crowd favorites like Slug or Prowl. Rarity will be a value of variation rather than strict character type, so most decks will almost immediately feature several mouthless faces, familiar and unfamiliar alike, depending on how you’ve been keeping up with the timelines.

Wave 2 of the cards are set to be announced in January of next year, with tournament support to follow as the game finds its professional-play minded audience. It’s clear that the game has room to grow, but it’s main draw and feature is the assembly of your own transmogrifying team of high-octane squabblers. If you’re a fan of Transformers there’s no reason not to dip into this game at least a little bit, and if you are miraculously unfamiliar with these robots then this game would be an elegant point of entry. Hasbro and Wizards are doing the decades of lore justice, with an emphasis on the platoons of personalities that have scaffolded the series throughout its entire existence. The big cards are a thrill to sift through and assemble a squad with, and the regular ones are riddled with enough meta-textual references to keep longtime fans grinning, even while getting pummeled into submission.

CCG, Transformers, Wizards of the Coast

The Tentacled Spirit of Yharnam, in Card Stock
Previous Post