Those who have been following along for some time are familiar by now with my adventures with the Warhammer Quest franchise. The 1995 original remains the ur-text of dungeon crawl games, for me, while Silver Tower is a favorite from among the more recent iterations. However, the latest installments in the long-running (and frequently disrupted) series have become more complicated in a way that pushed me, personally, somewhat to the sidelines. Enter Lost Relics.

Warhammer Quest: Lost Relics distinguishes itself from its forebears in a number of ways that are immediately obvious. For starters, it’s a lot smaller. It comes in a sturdy box about the size of a ream of paper, the exact same size and style as, say, the season boxes for Warhammer Underworlds. It’s also available only through a partnership between Games Workshop and Barnes & Noble, joining a host of other, similarly packaged Warhammer games like Fireteam, Combat Arena, and so on.

To go along with the game’s much smaller size, it also boasts a stripped-down version of the standard (and ingenious) modern Warhammer Quest ruleset, which allows games to be played in as little as 30 minutes, according to the box. Action dice and so on work more-or-less as they have in every iteration of the game since Silver Tower, with a couple of major exceptions. For starters, the amount of rolling is drastically reduced.

Every turn, you roll your action dice, which you’ll use to perform actions that turn. What they roll determines whether you perform a standard action or an Inspired action. Inspired attacks, for example, do more damage, while an Inspired move lets you move farther, avoid enemies, and so on. You don’t roll again to see if the attack or whatever is successful. If you spend the action die, it succeeds, with the only real randomness being what dice scores you have to work with on your turn.

There’s more to help speed things up. Enemies don’t take turns, and don’t roll dice at all. Instead, at the end of every hero action, an enemy takes a reaction – unless you can find a way to foil them doing so. This cuts down drastically on the amount of dice rolling that takes place in the game and, with it, the time that a game takes. It also reduces the variability of game play, making a game of Lost Relics feel a bit more like a game of chess (albeit played against the board) than a standard dungeon crawl.

The final innovation to the rules is an odd one, and one that I haven’t had a lot of experience with yet. This is a co-op game that can be played with as few as one and as many as four players, but no matter how many people are playing, there will always be four heroes (and a bird). These four heroes must work together in order to come out on top, and one of the ways they can do that is to create what the game calls Action Chains.

When a player spends an action die with a score of 1 to perform an action, they can begin such a chain. Then, any hero, regardless of turn order, can spend a die with a score of 2 to immediately perform an action. Then a 3, and so on. The key to this is that enemies are unable to perform reactions until the end of an entire Action Chain, allowing the heroes to potentially accomplish quite a lot before the enemies get to take a turn, assuming the dice cooperate. 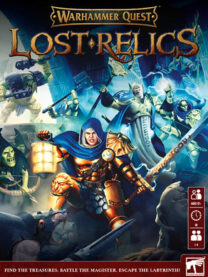 These are all differences between Lost Relics and former Warhammer Quest games that make this iteration feel lighter and breezier than even the simplest of its predecessors, but this change in tone is apparent even before you ever read the rulebook. That smaller box brings with it a commensurately smaller number of miniatures. While most Warhammer Quest installments are bursting with plastic, this one contains only five minis, one of which is a bird.

These represent your warband of Stormcast Eternals (the game’s ultimate “good guys”), who will look familiar to anyone who has played much Warhammer Underworlds. (More on that in a second.) All the villains, on the other hand, are represented by colorful tokens, which work just fine for the purposes of a game like this. Cutting down on the minis may reduce the overall utility of the game for those who play other Games Workshop titles, but it also brings the price tag down considerably – Lost Relics only costs about $50, while the previous iteration of Warhammer Quest retails for closer to $200.

Here’s where things get interesting, though. I’m an inveterate player of Warhammer Underworlds (which means that the five minis in Lost Relics are mostly duplicates for me, since they reproduce one of the recent Underworlds warbands). In fact, I own every warband ever put out for the game. Which comes in handy when playing Lost Relics, as it turns out, as all the enemies from Lost Relics are made up of warbands from the first couple of seasons of that game.

What this means is that, while you can play Lost Relics just fine with the minis and tokens that come in the box if, like me, you happen to own all the warbands that the enemies are taken from, you can also just swap in minis from those warbands whenever the enemies show up on the stage, and then you get the full experience of playing with a complete host of miniatures. It’s not an advantage that a lot of people are likely to get to enjoy, especially given that all of the warbands represented are out of print, but for me, it’s a huge bonus that makes an already great little game all the more exciting.