“The dead are losers. If anybody hasn’t earned respect, it’s the dead.”

Let’s set the stage: When I first went off to college, I did so sight unseen. My alma mater had advanced scholarships and loans sufficient for me to be able to afford to attend, and it had a good reputation. That was all I knew prior to my arrival.

I knew nobody at my new school, and I was away from home on my own for the first time in my life. What I did know, however, or quickly found out, was that there was a video store on the main drag of the little town where my university was located. That first night, I walked down to the video store, got my rental card, and rented a movie from the horror section that I had never seen before but always wanted to based solely on the title. That movie was Children Shouldn’t Play with Dead Things on VHS.

This would have been in 2000. Back then, I was still a budding cinephile, and I knew next to nothing about movies, at least comparatively. I barely knew who Bob Clark even was. I don’t remember much about the experience of watching Children Shouldn’t Play with Dead Things that night, save that I liked it, but what I do remember is that I was exceptionally lonely, and watching this movie made me feel less alone.

Now for some background on Bob Clark: While he is perhaps best known to normal people for comedies like A Christmas Story and Porky’s, us horror weirdos know him for a one-two punch of horror classics from 1974: Black Christmas, one of the greatest slashers ever made, and Deathdream. Coming two years before either of those, Children Shouldn’t Play with Dead Things is his first foray into horror, and his second feature, following the exploitation flick She-Man. (Which I have never seen but damned if it doesn’t sound problematic.)

Children Shouldn’t Play with Dead Things was filmed for around $50,000, pretty much all of which must have gone to the numerous zombie makeup effects. Some of Clark’s college friends make up the cast, and just about everyone is playing someone who has their same first name. It’s that kind of movie. Unsurprisingly, then, Children Shouldn’t Play with Dead Things isn’t quite as effective as Clark’s other two horror classics. But given its pedigree, it comes much closer than you might think.

While those two films contain satirical and humorous elements, they play their horror straight – and so does this one, despite being avowedly a horror comedy. The comedy elements, as is usually the case with the best horror comedies, come from the human characters, not from the situation. Once the dead rise, which admittedly doesn’t happen until the third act, this thing is a horror movie, full stop. 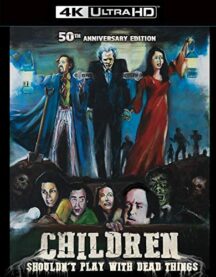 The zombie makeup is good and, as I mentioned, plentiful, done by lead actor Alan Ormsby. And the movie looks great for its budget, even if it’s often impenetrably dark, even in a nice 4K restoration from VCI. But where the film is strongest is when it’s just the crew of weirdos bickering and wandering around, before the dead ever rise from their graves. That’s, in part, what makes Children Shouldn’t Play with Dead Things so incredible.

Like a lot of low budget horror movies, Children Shouldn’t Play with Dead Things centers on a group of bickering “friends” who head out to an island because one of their number has decided to dig up a corpse and do some Satanic magic to raise the dead. In this case, our gaggle of soon-to-be victims are a theatre troupe and their diva of a director, who seems to have brought them to the island purely to make their lives miserable.

In most such situations, the cast is a bunch of annoying and boring people, ostensibly so that you’re looking forward to their demise. But Clark shows his aptitude for capturing the humanity in just about everyone, and the moments spent watching the troupe pick their way through the graveyard – the director delivering his pompous monologues with relish while the others relish taking the wind out of his sails just as much – are the movie at its most enjoyable. While Alan Ormsby’s director is an absolute weasel of a human being, he’s never anything but a joy to watch.

And that is the genius of Children Shouldn’t Play with Dead Things. Sure, it turns into a superior cut-rate zombie picture before the end, but even in the run-up it’s a fairly accurate portrait of what macabre weirdos like us got up to – or imagined ourselves getting up to – in the days before we had the internet to distract us. Sure, my friends and I never disinterred a corpse in order to raise the dead, but I’m not going to pretend like we didn’t talk about it, and if we never got around to it, well, it’s mostly because we were too lazy and disorganized.

There’s thematic density here, too, beyond “let’s hang out with a bunch of weirdos in a foggy cemetery at night” (as if that’s not plenty). Zombie films are notorious for being able to support just about any metaphorical reading you want to layer onto them, and by the time Children Shouldn’t Play with Dead Things hit screens, George Romero had already made zombies the de facto most political of all horror staples. Which should then perhaps make it no surprise that Children Shouldn’t Play with Dead Things is ultimately a film about being underemployed and having to put up with a shitty, abusive boss – something that we can all relate to, even if we’ve never raised the dead.