“I handled Twisted Sister, I think I can handle Floyd.”

Over on Letterboxd, user Cinema_Strikes describes this flick as “what I think QAnon believes is real life – federal environmental protection agents in black vans with Uzis led by an albino Brion James poisoning the water of small town America.” That’s a decent summary of as much of a plot as you will ever get from Nightmare at Noon, a movie that feels like a spiritual sequel to the frankly much better Mutant (1984), and not just because they share several cast members and have both been featured on RiffTrax.

Let’s start with the cast. Besides the aforementioned Brion James, whose albino villain never has a single line, there’s a B-movie Mount Rushmore of debatable talents, including Oscar-winner George Kennedy, Bo Hopkins, and of course Wings Hauser, as an attorney who makes his living doing contract work for rock stars and then suing them for breach of contract, apparently. (Also, evil albino Brion James looks just like regular, present-day John Carpenter.) 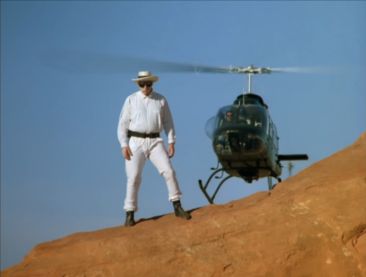 To an enormous extent, your enjoyment of (and even tolerance for) Nightmare at Noon will rely largely on how much affection you have for these actors, since they’re the beating heart of the film, even if none besides maybe Bo Hopkins are at their most scenery-chewing here. Beyond that, it’s all desert locations, stiffly-shot firefights, and green-tinged “zombies” who bleed Nickelodeon-green blood. That, and dialogue like Wings Hauser complaining about microwave croissants, or a cop arguing that “the CIA wouldn’t do this in their own backyard – they have Central America for that.” And of course an extremely drawn-out helicopter chase that eventually caps the action, such as it is.

Which is all a long way of saying that Nightmare at Noon is the kind of flick that we would watch at Analog Sunday here in town, albeit not as bizarre as many of the ones we’ve screened there. Wings Hauser apparently goes hunting with a tactical shotgun. The bad guys (who never give any kind of even half-assed explanation for their actions) work for the Agency for the Protection of the Environment, the acronym for which is APE. And even though they are ostensibly doing all this in secret and planning to cover their tracks by having two guys light some cars on fire with flamethrowers, they not only wear hats that proclaim their agency affiliation, they even have personalized license plates that do the same.

While it was also released under the (probably better) title Death Street U.S.A., this movie is pretty clearly called Nightmare at Noon so that it can riff on High Noon, which it does on several occasions. “This isn’t High Noon,” Wings Hauser says to George Kennedy’s sheriff, who seems to have a perpetual case of heartburn. “I reckon it is,” he replies. Later, one of the film’s big showdowns takes place in the town’s disused drive-in, where the marquee still advertises – you guessed it, a showing of High Noon. 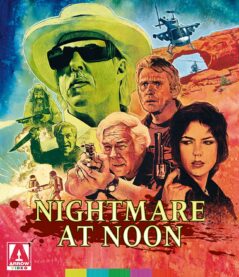 Bo Hopkins is a hitchhiking former police officer who got drummed off the force for murdering a rapist. “Out here,” George Kennedy tells him, “killing a rapist is a duty, not a crime.” As is generally the case when they star together, Hopkins and Hauser have a buddy cop sort of love-hate relationship, as they bicker incessantly but, ultimately, Hopkins leaves behind his tacked-on love interest to jump back in Hauser’s RV and head across the country at the end of the film.

“What the hell happened to this town?” Hauser asks, in the midst of the carnage. “Freeway missed it,” Hopkins replies.

All of which is, once again, going the long way around to suggest that while Nightmare at Noon is not a good movie by… well, really any measure at all, it is a picture that will appeal to people who appreciate trash of a certain vintage. And it looks good on the unnecessarily nice Blu-ray from Arrow Video, so you can enjoy all of the wide-open desert vistas as helicopters pursue one-another interminably through Utah’s Arches National Park for no reason. And sometimes, that’s all you need.

Oh, and a synth-heavy score co-composed by Oscar-winner Hans Zimmer. There’s that, too.