Pentiment begins 200 years before Robinson Crusoe – the first European novel – was published in 1719. But Andreas Maler’s murder mystery is clearly marked by centuries of writers yet to come. As well as direct influences like monastic murder mystery The Name of the Rose, Obsidian’s intricate realization of a village in times of religious and social crisis shares an approach with Charles Dickens and George Eliot. However, most of all, Pentiment’s multifaceted historical mystery mirrors how modernist writers in the 1900s understood the world as their faiths and institutions crumbled.

For several centuries, the dominant form of the novel was another German literary invention, the Bildungsroman – also known as coming-of-age novel. Works like Huckleberry Finn, Jane Eyre and Oliver Twist focused on characters in early adulthood, telling the story of how they overcome hardship to gain financial comfort, emotional contentment and a respected place in society.

Over time, the genre’s moral conservatism, all-knowing narrators, and depiction of a just, stable social order felt trite and outmoded in western societies gradually rejecting concepts like objective truth and underlying theistic order. Modernist writers like James Joyce and Virginia Woolf instead fully occupied their character’s minds; they saw the world colored by every emotion, presumption and bias a person can feel – not deciding to write an unreliable narrator, but choosing to prove beyond doubt all narration is unreliable.

And Andreas is incredibly unreliable. He’s not this way because of delusion, malice or incompetency, he’s this way by the simple nature of being human. A popular early exchange gives us a perfect example: when Andreas’s first impression of Baron Rothvogel is challenged, after realizing the baron’s unexpected education, his textboxes shift to a more appropriate bookish font. It’s an entirely modernist flourish, stylishly showing how you only interpret the world and each other through your own experiences and assumptions.

If you thought Disco Elysium’s Harry Du Bois was an unfortunate detective, at least he could pass a skill-check. Andreas could skip his blundering investigation and roll a die to choose the Abbot’s real murderer with no worse an outcome. With only partial evidence, gossip, and the tools of his background and personality (chosen by players in traditional RPG fashion), he makes invariably poor decisions in never enough time. And really, it never mattered that he fails to pin down the elusive truth: the abbey was always going to burn. History is indifferent to one man’s actions in the face of centuries of inequality, as a modernist’s contemporary would put it. 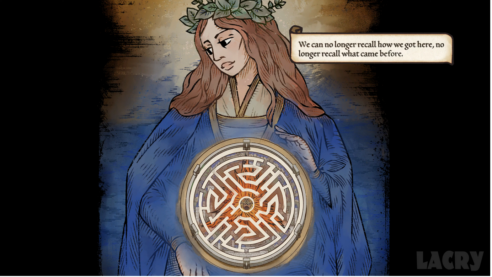 In Act 3’s shift to Magdalene, leaving Andreas behind in the abbey ruins as a disheveled Count of Monte Cristo figure, Pentiment reveals its true focus. As well as the murky truth of the present, it’s equally fixated with the fascinatingly unknowable past. Tassing is a monument to lost knowledge. You can see this in the villager’s fading knowledge of their pagan traditions, their Roman past buried beneath its Christian present, and how clearly the game presents the Tassing we know so intimately as one more past, destined to be lost and only ever partially understood through Madgalene’s lasting contribution to Tassing, the Rathaus mural.

That unknowability, that loss of faith and structure, is exactly the fight modernists took on when they tackled the limits and subjectivity of being human. Just as Virginia Woolf’s To The Lighthouse’s characters are irrevocably trapped in their own subjective experiences and perceptions around a family outing, Tassing’s villagers are crystalized in their own time.

There are few better to speak for modernism than T.S. Eliot, no stranger to searching for meaning from a now silent past. You could almost picture a frustrated poet in Tassing’s ruins, complaining about the mysteries of shards of pottery and crumbling stones.

“What are the roots that clutch, what branches grow
Out of this stony rubbish? Son of man,
You cannot say, or guess, for you know only
A heap of broken images, where the sun beats,
And the dead tree gives no shelter, the cricket no relief,
And the dry stone no sound of water.”

100 years later, Obsidian take a contemporary, gentler approach. The past can be two things at once: a rich puzzle to be understood and decoded through deduction and interpretation, and an irrevocably lost mystery without key texts like Historie Tassiae, a Rosetta Stone providing a vital link to the village’s past.

Where the game really diverges from modernism is how it tackles the unresolved question left after the modernist mission has been achieved. Once you’ve dismantled religious conviction and the formative myths behind a place’s existence, what comes next? For modernists like Virginia Woolf or Wallace Stevens, proving the dizzying elasticity and variability of individual experiences was enough. There’s thirteen ways to look at a blackbird, and thousands of ways to reconstruct an ambiguous past.

What truth does Magdalene leave to Tassing? Pentiment simply lets players decide whether to reveal the truth that St. Mortiz and St. Satia were originally the Roman deities Mars and Diana. Do you side with the murderous Father Thomas and protect the village’s faith and income from its famous pilgrimage site? Or do you reveal the truth and risk further destabilizing an already fragile, wounded community?

It’s an emphatic demonstration of the fluke-ish accidents that make up historical narratives. Magdalene’s choices and interpretation of a single moment in time are destined to be preserved for centuries in Tassing’s living memories, on the Rathaus walls, and Reddit threads by players celebrating such an artistic recognition of their choices.

Reddit user bubblebobby’s Rathaus Mural as linked in the article.

It’s a choice that really struck me. It reminded me how I rejected my own religious upbringing and never knew how to replace its sense of purpose, as much as I treasure the right to search for the meaning I can find for myself. I had a modernist perspective from reading Sartre, Woolf and T.S. Eliot as a moody teenager, but lacked the tools to find a new meaning to fit my changed understanding of the world. Having been reminded of my own truth so powerfully by the game, of course I told Tassing their own. I still wonder what they made of it.

Francisco Dominguez is a university worker and occasional freelance writer from the UK. He enjoys removing double-spaces from academic blogs, and expanding idle thoughts into features.