There’s a moment early on in Pentiment where you, as Andreas Maler, are sitting at the bishop’s table for dinner, along with the local baron. You aren’t supposed to be there, but the baron has taken a liking to you – as a fellow educated man – and insisted you join him for dinner. As he put it, who was going to turn you away? The baron wields an uncomfortable level of social capital, and he extends it to you – whether you want it or not.

The baron makes you complicit in his transgressions, as he speaks over the monk’s reading and tries to provoke debate with the unwilling bishop. Put on the spot, you have to choose: do you upset your unwilling host in the bishop, or your extremely powerful ally? Pentiment is a game about the changing balance of social power, and this uncomfortable dinner sets the stage for how even words are catalysts of change. And then, of course, the baron is murdered.

The thing about catalysts is that influence isn’t the same thing as control. When a judge comes to prosecute the baron’s murderer, Andreas is forced to make an argument for who the murderer must be in order to save the scapegoat. But it puts you in the position of deciding who will be executed in their place, with Andreas having this life-or-death influence, but not enough power to be able to say that he needs more time, or evidence, to prevent a terrible mistake. 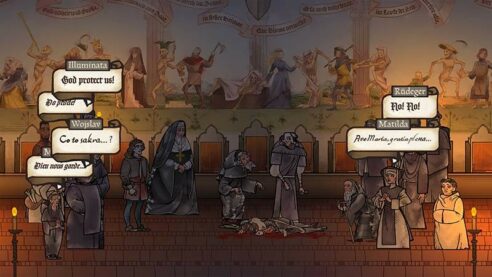 With imperfect evidence, and an inflexible deadline, who your suspects are – by themselves and to other people in Tassing – ends up being a deciding factor. In my first playthrough, I only had enough time to find plausible evidence for two out of four suspects, and I wasn’t compelled by either. In the end, I hoped the execution of one was a greater social ‘good’ than the other. It wasn’t.

As hardship hits Tassing, it becomes harder to play Andreas any way other than carefully. This isn’t the same as trying to pick neutral options – there are no neutral options, people will still die – but the smallest choices are weighed down by greater responsibility. His outsized influence ripples outwards, like a rock thrown in a pond, occasionally just bludgeoning a fish.

These choices don’t feel weighty because of your ability to make choices as the player; they feel weighty because of the position that Andreas holds. He works in Tassing, but he doesn’t live there. He moves freely among both the monastery and the town. He shares their bread (as Pentiment lingers on every mealtime), but he doesn’t sow their grain or grind their flour. He moves through changing spaces and is trusted in them – while you have to trust that the consequences are out of your control.

Ruth Cassidy is a writer and self-described velcro cyborg who is between internet homes. You can find their portfolio at muckrack.com/velcrocyborg.

How Dracma Studios is Lighting Its Own Path With Candle Knight