In the game Stray by the French developer BlueTwelve Studio, the orange cat protagonist is first shown adventuring with its group until a misstep sends it plummeting into a world of laser guns and taking orders from humanoid robots. While those are imaginative ways of survival for the cat, the setting lacks that level of imagination and relies on preconceived aesthetics of cyberpunk.

In Stray, Walled City 99 was a bunkered cohabitation of humans and helpful robots, but robots have made it their home after humanity’s demise. Its design takes after Kowloon Walled City, which was once in Hong Kong. Besides the societal disarray and vertical, compact architecture that befit the cat’s love of climbing, Kowloon Walled City’s larger history and tensions are insignificant to the player experience. This inspiration meshes with other culturally representative assets essentializing different Asian cultures, and the developers bit off more than they can chew with the environmental storytelling.

In its journey to find an exit from the bunkered city, the cat arrives at the litter-filled, grim Slums at the bottom rung – reminding me of European, Western fascination with slums and romanticized classist struggle in non-white countries. Here, the repetitive West and South Asian-inspired trinkets are easily distinguishable, which is exacerbated after leaving the Slums and reaching the vibrant Midtown. 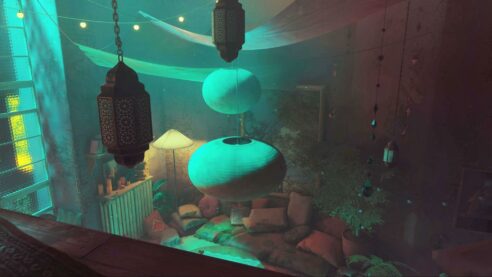 A friendly robot named Clementine has towers of South Asian-inspired pillow designs sitting on top of cushioned floor seating found in many Asian cultures, and beneath are layers of Persian rugs that decorate the floors. Above, strings of beads glisten, and West Asian-themed metal lanterns hang alongside paper lanterns in her Midtown apartment. I’ve seen this rug-pillow-lantern scenery in games set in Muslim-majority countries, but it was confusing to find it here. I later read one of the level artist’s reasoning that mentions “hippie vibes,” to which I rolled my eyes. Also, these items are heavily seen in the Slums earlier in the game – which I assumed were just decorative assets – but are hard to find in Midtown’s recognizably East and Southeast Asian cyberpunk techno-orientalist design. It wasn’t until I reached Clementine, who came from the Slums, that I understood the purpose of these “hippie” rugs and lanterns as characterizations of humans who lived in the lowest, poorest rung of the city.

The Maneki-Neko figurines, rice paddy hats, overlapping neon signs, beaded curtains, and ramen shops with orange lanterns, rugs, pillows, metal lanterns, paper lanterns, and floor cushions objectify people from the West to the East of Asia. A non-Asian studio attempting to create a multicultural, classist city revolving around their concept of what Asianness might look like and presenting their idealized vision is an example of orientalism.

Cyberpunk encompasses real-world subjects such as globalization, xenophobia, and classism concerning multicultural settings, yet Stray barely scratches the surface as a cat adventure game. The cat’s sentient drone companion named B-12 shares memories about the city’s history throughout Stray to satisfy curiosity, but cultural references remain up to interpretation. The unnecessary objectification and display of a multicultural world absent of the people it’s representing in a dramatized version of a historic city are pointless to a cat but invaluable to the player experience. I would have the same excitement to play as a cat and tear rugs if this game were set anywhere else and at any time period.

Game, Made of Lines and Vines

Cyberpunkland and the Full Service Dystopia Simulator of Tomorrow, Today