Since Unwinnable readers surely wouldn’t know what that string of obscure, seemingly random words means, I’d like to let you in on a little secret.

There is, I have recently come to learn, something out there called Pokémon. There are TV shows, videogames, posters, plushies and all kinds of associated merchandise related to it, but the main thing is the cards. They come in packs and boxes just like baseball cards do, and people like my seven-year-old son are obsessed with them.

Let me back up a step, since I’m coming at you fast with all this new information: Pokémon is a portmanteau. It means pocket monsters. Ostensibly, fans of Pokémon are encouraged, nay instructed, to “catch ‘em all.” This they can attempt in many ways, but based on my seven-year-old’s YouTube history, the main strategy is to become an adult and buy (or be given) large amounts of Pokémon card packs and open them live on camera, reacting way too enthusiastically at a rare “pull” – which is typically any card with “full art.” And, if you believe these YouTubers, as my elder son does, these cards are as good as legal tender.

Among these rare pulls are those categorized as Rainbow Rare. At least one of these Rainbow Rares is of a pocket monster called Charizard. Full-art cards are often labeled as VMAX. Put those terms together and you’ve got it: 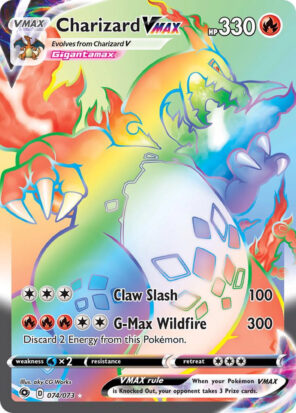 This is a joke, you’re thinking. But it’s not! These cards really do exist. And now, my seven-year-old son’s life’s dream is to save enough money that when he is older he can buy himself a Rainbow Rare Charizard VMAX, which, depending on whom you believe, is either worth a couple hundred bucks in mint condition, or your eternal soul.

My elder son once dreamed of saving up for a house. I thought this wise and prudent, although it did seem a little sad he was hoarding his birthday money when he could at least allow himself a toy or two every now and again. We even opened up a bank account for him to help him learn more about managing his fledgling finances. Lately, though, that talk of saving for a house has died down. No, it’s now mostly about the Rainbow Rare Charizard VMAX, the dream of my kid when he imagines himself a fully grown adult with enough disposable income to buy whatever toys he wanted when he was seven.

As I said earlier, there is no one in the Unwinnable community – readers, writers, editors – who has any idea what I’m talking about. So, you might find my son strange. You’re probably Wikipedia’ing Pokémon right now to check that I’m not totally shitting you. Again, I assure you I am not.

The Rainbow Rare Charizard VMAX exists, and when my son is old enough, I hope that he has plenty of cash to buy it. And that he still has money left over for a house.

The Stray’s Plummet Into a Strange Future