Western pop music has a fairly substantial history of embedding extra-terrestrial imagery going back at least to David Bowie beckoning Ziggy Stardust down from the skies to bless us all with his heavenly, cocaine-fueled riffs. Around the same time, George Clinton and the Funkadelic were downloading the Mothership Connection, infusing the same alien-theme with a heavy dose of funk and, well, cocaine. Later artists like the Flaming Lips and Janelle Monae would also come to use extraterrestrial imagery, but it seems to really have taken off within hip hop. Outkast dropped ATLiens in 1996, explicitly placing themselves on the outside of east coast/west coast hip hop dynamic; Del tha Funkee Homosapien and Dan the Automator crafted a full scale sci-fi classic as Deltron 3030; The Beastie Boys blasted into outer space with what may have been their biggest hit, “Intergalactic Planetary;” Kid Cudi and Lil Wayne have regularly referred to themselves as martians. 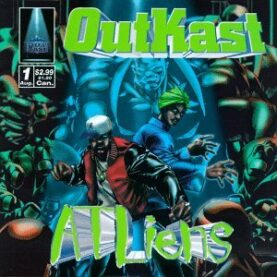 In a parallel lane, monsters have also made fairly regular occurrences in pop music over the years in everything from Warren Zevon to Michael Jackson to Alice in Chains. Monsters have of course made their way into the hip hop sphere too, often in the horrorcore space, with folks like Tech N9ne, Hopsin and Tyler, the creator. But monsters have also made their way in the mainstream in songs by Meek Mill, Eminem and maybe most notably in Nicki Minaj’s breakout verse where the new MC swept the floor with two veterans.

Clearly, these two themes – aliens and monsters – have roots in the history of pop music, but I don’t know of any genres other than hip hop in which the two are combined so effectively, specifically in the work of two of the GOATs: Kool Keith and MF DOOM. Both of these MCs spent years building up mythologies for a wide cast of characters that cross multiple albums, and they end up regularly featuring (for lack of a better term) space monsters. However, I think they both use these figures for slightly different purposes. 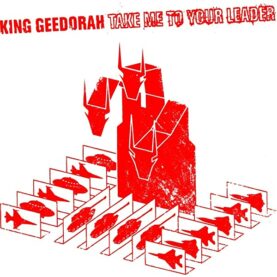 King Geedorah was a divergence from Daniel Dumile’s previous characters Zev Love X and MF DOOM, in the form of a monster from outer space. DOOM developed the character as part of the underground group Monster Island Czars (MIC) that included MF Grimm, Jet Jaguar and X-Ray. Much like how members of the Wu-Tang Clan incorporated elements of Marvel comics into their characters, each member of MIC was meant to have a new identity from the Godzilla lore that would help generate a whole world to rap in, and DOOM chose King Ghidora, the three-headed dragon. According to Wikipedia, the group only had one full length collaborative album, 2003’s Escape from Monster Island, but there are 39 solo albums from the members, including King Geedorah’s Take Me To Your Leader. Even though many of the MIC crew make appearances on the LP, the metal hands of DOOM are evident throughout the production of the album.

With this new foe in the mix, Dumile’s supervillain MF DOOM was no longer the ultimate evil in his universe. This is a common trope for comics, where the villain in one storyline can join the heroes in the next when a greater enemy arises. In many ways, Gheedorah serves to make DOOM seem less terrible, no longer the greatest threat in the universe. There is now an extraterrestrial threat to the survival of the world, so DOOM suddenly seems a bit more sympathetic, even cool. Well, to be honest, DOOM was always pretty cool, but now we could empathize with him a bit more. 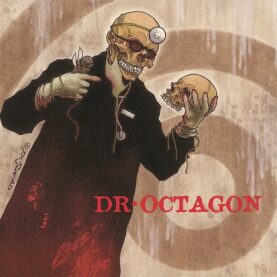 In a similar way, Kool Keith’s creation Dr. Dooom (no relation) serves to quash the threat of Dr. Octagon, but this storyline gets a bit more complicated. After leaving his breakout group, Ultramagnetic MCs, Keith dropped his first solo album, Dr. Octagonecologist in 1996, introducing Dr. Octagon, a murderous alien from Jupiter who sometimes tortures, sometimes seduces his patients. Ultimately, Doc Oc is a vehicle for Kool Keith to discuss the horrors of bureaucracy and establishmentarianism. It only makes sense then that Dr. Dooom, a serial killer of sorts invented by Keith, would come along and kill Dr. Octagon in 2008 in response to a record label dispute when they released the sequel to his debut with little involvement in the production from Kool Keith himself.

Dr. Dooom (and Kool Keith in general) represents an approach to the monstrous echoed by King Geedorah and MF DOOM, but in a more specifically blunt excoriation of his label. In fact, excoriation may be too kind of a word because Dooom drowned Dr. Octagon, stabbed him 17 times, electrocuted him by electric razors and beat him to death with rocks. Octagon is deceased, and Keith made sure that we knew why, telling us the details of how the label used and abused the creation. Notably, Dr. Dooom isn’t physically a monster at all, just a regular old serial killer; he isn’t from outer space, but from our home planet. He’s a monster we all can recognize with ease. 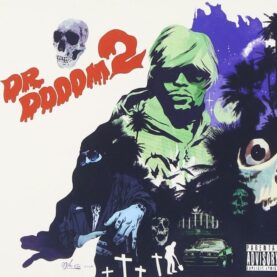 Dooom functions much like some of the more traditional scary characters that appear in hip hop. These serial killer type folks appear in the horrorcore space for sure, like how Earl Sweatshirt’s debut mixtape features the incredibly fucked-up thoughts of a teenage serial killer or RZA’s adventure into the genre with the Gravediggaz. But we also have more mainstream rappers working with the themes of serial killers, like Dr. Dre with “Murder Inc.,” the “Body Parts” trilogy by Three 6 Mafia, or Method Man and Redman on “Cereal Killer,” even though that one is pretty much for jokes. These hyper-violent songs and characters often just feel like the natural extension of the realistic-violent content of gangsta rap and more mainstream trap music where slinging guns and murdering your rivals is a sport, fun even.

Essentially, it seems that Keith and DOOM are following the clear line between the monstrous acts of street violence described by rappers like Ice-T, Chief Keef or ScHoolboy Q to create scary aliens who thrive on hyper-stylized, cartoonish violence. But through these metaphors, they speak to the same themes that pervade hip hop at large – the representation of Black Americans as the monstrous other. Through the figures of Geedorah, Octagon and Dooom, the two MCs both embellish this trope through exaggeration and hyperbole and work to dismantle it, by evoking sympathy for the super villain and attacking the true monsters who deformed their identity – the music industry and popular culture.