For a game wherein characters look into the camera and monologue their interiority to the viewer, Half Mermaid’s Immortality rejects generic characterization. Leaping, fucking, weeping, and sneering surreptitiously throughout the digital reels of Immortality’s faux film footage. Inscrutable though they may seem, The One’s desire is to not only be immortal, but to do so in, through, and as art and artmaking. They wish to blur the lines between art, artist, and viewer and in doing so, push the boundaries of expression. What’s disappointing are the limits which manifest in this metaphysical endeavor when The One’s art falls into heteronormative tendencies.

The One and The Other One’s acts of creation result not only in Marissa’s three unreleased films. The production of each film itself is an element of their over-encompassing art pieces: the lives and bodies of Marissa, Amy, John, and Carl which they mold and shape into texts unto themselves. Half Mermaid including within the Moviola-style database not merely the finished footage of Marissa’s films, but the production of each shot from (but not limited to) “action” to “cut,” forwards the notion that the parameters of The One and The Other’s art extends beyond the films Ambrosio, Minksy, and Two of Everything. The notion of “the artist becoming the art” is literalized by these metaphysical body snatchers; a notion which is clinched by the clip of Amy (inhabited by The Other One) using a clapperboard marked with the title Marissa Marcel on the slate. As The One laments, “The Other One wants me to choose between everything that’s real and an idea. It’s impossible.”

When their bodies are taken over, the people named Marissa, John, Amy, and Carl are repositioned as the art pieces: Marissa Marcel, John Durick, Amy Archer, and Carl Greenwood. The lines between art (Marissa), artist (The One), and medium (the human Marissa Marcel) collapse with further layers of reality and ideal blending together within each text. For example, in the works Marissa and Carl, the characters they play in the three films echo the lives The One and The Other have them lead within and without those films. In Amborisio, Minksy, and Two of Everything, we see Marissa evolve from the ingenue turned temptress, to the boundary pushing feminist, to the seasoned professional with a tired sadness behind her eyes. Each of these archetypes corresponds to the roles played in each film, neither one echoing the other, but instead mirroring, as there is no membrane between the character played and the character lived. 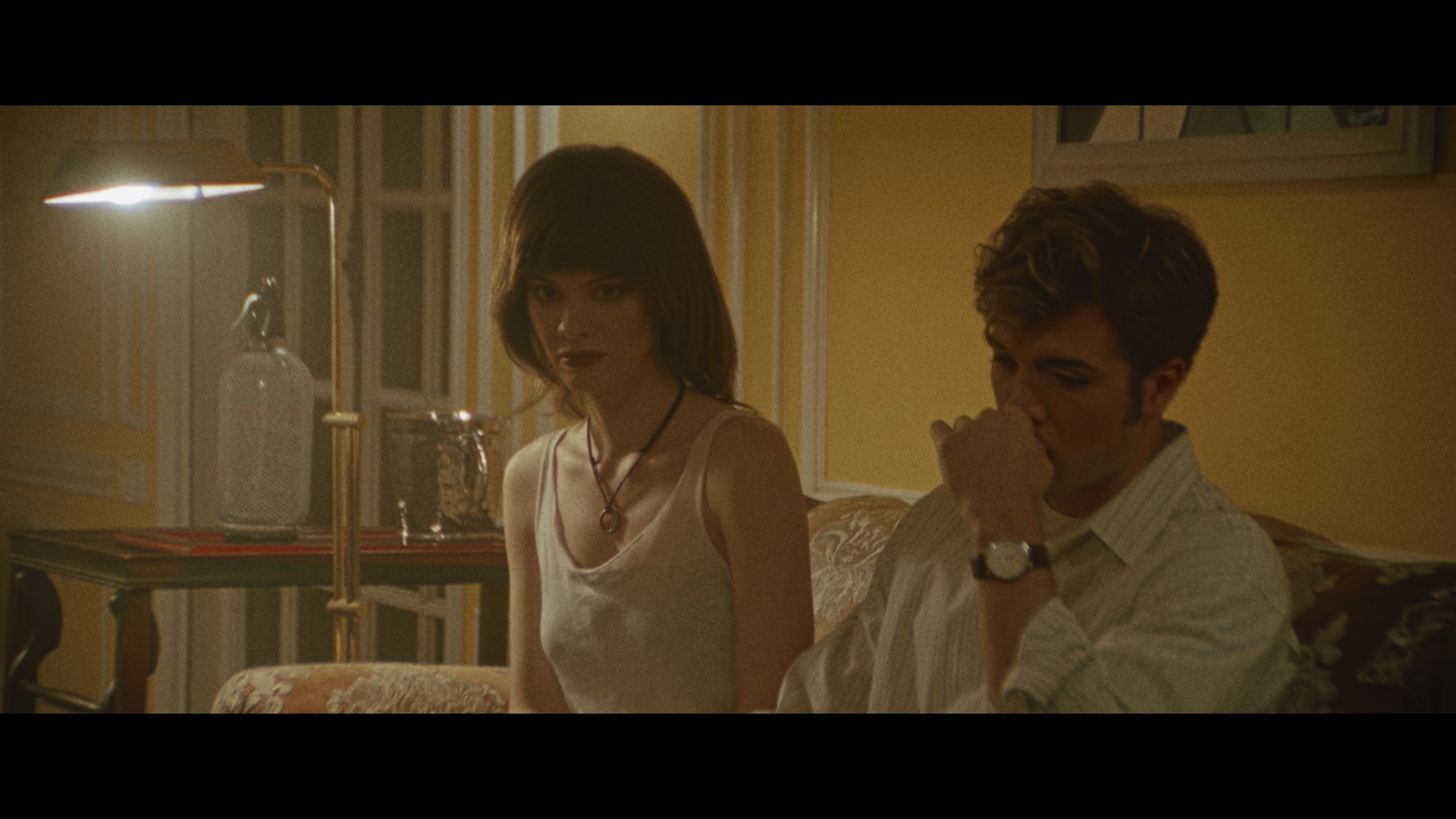 Just as the player does when navigating through the Moviola database, I’d like to narrow the scope of Marissa Marcel down to the chapter on Minsky as the “boundary pusher.” From there, I’d like to zoom in on the clip where Carl appears to kiss John and shifts the dynamic between the three of them until the end of Carl’s life, which follows promptly. In a collaborative sequence, The One’s Marissa Marcel, and The Other’s work titled Carl Greenwood intersect and disrupt one another. This collision results in a scene in which Carl and John lean in for a kiss–their familiarity implying their relationship is even deeper than a friendly peck–with Marissa interpreting their affair as a threat. The character is the actor, is the art, is the artist. Within the fiction, The Other One (embodying the work called Carl) was a threat to The One’s art through their philosophical disagreements, but that conflict becomes represented in their works, Marissa and Carl, through homosexuality impeding a woman’s ascent and therefore eliminated. The game wields queerness as a deviance leveraged firmly within the gender binary and as something threatening to the norms of the characters. This deviance manifests in the multiple depictions of crossdressing within the films.

Within fiction, Ambrosio is an adaptation of the 1796 novel by Matthew Gregory Lewis, so the instance of crossdressing here was written by Lewis in the vein of Shakespeare’s As You Like It or Twelfth Night. Women dress like men for the purpose of either comedy or drama, seemingly homosexual tension builds between the disguised characters and other men or women, the guise is dropped and the characters are secure in their heterosexuality. Ambrosio doesn’t dwell on the titular monk’s potential queer anxiety, but the trope pattern manifests.

The One, through Marissa Marcel, deploys more crossdressing shenanigans when writing Minksy; this time with the deviant aspect hyperbolized. In Minsky, the titular artist is revealed to enjoy sex with his muse Franny (played by Marissa) wherein she dresses as a man named Frankie Santora and, in Franny’s words, “He was the girl.” To be clear, when I say The One turns up the deviance in the crossdressing element at play, I mean that the film Minsky positions it as such, framing Franny’s revelation as yet another artists’ transgression with which to shock Detective Goodman. Particularly in a scene where Franny assaults Goodman in the guise of Frankie. 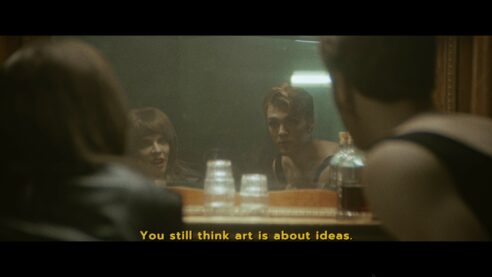 Silence of the Lambs, J. Edgar, Beyond the Valley of the Dolls, Psycho, the list of stories wherein a character (usually a man) is revealed to be a crossdresser to the alarm of the other characters and expected alarm of the audience. Color me jaded; if I was ever offended, I’m now simply bored. Transphobia is hardly a novelty in games, regardless of whether it’s being wielded to evoke filmmaking of old in spite of the trope prevailing well into the present day. I’m not interested in litigating Half Mermaid’s deployment of the trope in regards to representation. Again, simply bored. However, it’s that boredom that surprised me as I unearthed more and more footage in the Moviola. It isn’t enough that The One live forever, as that seems to be an easy enough feat for both them and their people. The One is an artist, an actor, a dancer, a singer, one who cares deeply about people, ideas, and expression. Whether due to too deep an entrenchment in American human culture or simply a lack of originality on the part of the writers, when it comes to gender and queerness, the limits and delimitations of The One’s desire are disappointingly conventional.

What’s more, The One and The Other themselves seem to operate beyond gender. However, even this supposition is one I make with the reservation that they are agender within the bounds of so-marketed gender neutral fashion lines. The caftans The One and The Other wear are flashier than the infamous nonbinary potato sack, yet they still evoke a shapelessness that looks in the sack’s direction. They wear the clothing of the various humans they possess, regardless of gender, but in the context of Immortality’s presentation and manipulation of gender broadly, I can’t help but read the two of them as limited to the binary they dress to defy. When the implication that they embodied and performed as Adam and Eve was made apparent, I couldn’t help but see the two of them as implicitly gendered, regardless of their dress or pronouns. Structurally, it doesn’t help that The One’s body is framed in the same voyeuristic manner as Marissa Marcel’s; an objectification enacted for the male gaze to the titillation of Ambrosio director Arthur Fischer and through the pretension of Minksy director John Durick (pre-possession).

Once – and only once – more: on this occasion, I am less concerned with representation or even objectification than I am ingenuity. The desire to gain immortality through the creation of art doesn’t necessitate the work be transgressive or transcendent. But for beings that have apparently pre-date humanity, observing, embracing, and critiquing as they may, I simply wish the art reflected a more elevated perspective on gender than the male-female binary. Immortality is a game that felt refreshingly novel to play, but the more I learned of the gendered limitations of The One’s desires, the less I cared whether or not their art lives on.