“The eye roams over ever-changing forms with no two quite alike, and the immensity of the room alone is sufficient to remind man what a small mortal he be, after all.” – Abijah Long

My favorite author, China Miéville, calls himself a “weird fiction” writer – a callback to the time before genre labels emerged, when anything “other” was simply weird. In games, there’s something even more satisfying about thinking about the idea of weirdness. Games can induce you to feel weird so viscerally.

And this is where Sam Barlow’s game Immortality, which came out August 30 on Steam and Xbox GamePass, enters the discussion. In the game, you scrub forward and backward through footage, rehearsals, casting, and behind-the-scenes of three feature films. When you pause each clip, you can activate a point-and-click interface where choosing objects and people leads you to other associated clips.

In 2019, I talked with Barlow about his 2015 game Her Story and the followup, 2019’s Telling Lies. “Something like twenty percent of people ‘100%’-ed it. For most games you’re lucky if twenty percent of people finish the game,” Barlow said of Her Story. He took the statistic as a challenge. “My approach with Telling Lies was to make it so big and huge and messy and colorful that it would feel less like something you could 100%, because I really wanted people to lose themselves in just the joy of exploring these characters’ lives,” he said.

I’ve been wondering what the “map” of this Immortality is like, because Barlow has, once again, drastically increased the size of the playspace. Someone has diagrammed every frame of all three films for objects and people, then someone else has swirled those outlined areas together in keyword pools with lightly randomized outcomes. That means clicking around can feel frustrating when it seems to lead in circles. But for me, any frustration was eased by how beautiful the footage was and how good the actors were.

I heard from 29 people (I’ve given them pseudonyms here) who played Immortality. I was curious about just one thing: What did you click on?

Felix told me they clicked randomly. Their “biggest structural critique of the game is that there’s no way of knowing which click targets will lead you to a clip you haven’t seen before, and so the game rewards you for just clicking on everything and hoping something yields fruit,” they said. Damningly (and I disagree!), they compared it to pixel hunting in 90s adventure games.

Others said their clicking began or even stayed somewhat random. “I don’t think I had much of a strategy besides whatever looked interesting in the scene and was not a thing we had clicked on all that often,” Martin said. Isaac said they followed the “dream-like logic” created by the game’s match cuts, a scene transition focusing on a shared object like an apple or lamp. Mary “haphazardly clicked” at first and then tried to backfill scenes by focusing on different objects. 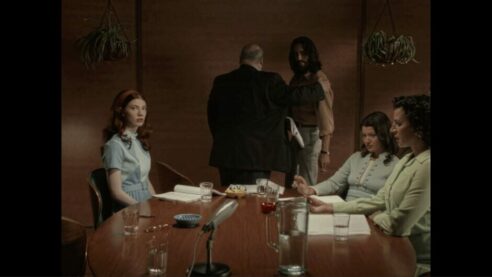 Some people made objects their main priority but chose them pretty randomly. My historian friend inspired this column, because I had to persuade them to eventually start clicking on people at all. “I started by clicking on props and other objects—papers, apples, microphones, chairs—because I wanted to see and track and understand how the creators were thinking about these material symbols over the span of the three films,” they told me.

Catherine said they were drawn to objects but not in any particular order: “ I wasn’t playing it like I was necessarily searching for answers,” they said. “I was drawn to objects more than anything else, especially ones that weren’t the focal point of the scenes.” For Rita, objects conjured their creators: “I had in my mind the idea that directors often have a prop they’re known for that they’d put in multiple movies so I was searching for something like that.”

For Thomas, the interactivity and mapping itself was part of the flow. “It’s always hard to reconstruct,” they said, but they were guided by “general curiosity about non-human objects, microphones, plants, coffee cups, plus what might appear in multiple contexts.” Nicholas said, “Early on it was experimental as we were just figuring out the mechanic, [but] later we’d get fixated on objects — keep clicking on guns or wine glasses or framed art.”

Others focused on objects but sought motifs from the plot or what they felt were key or unusual objects. “I looked for props that would be unique to that movie [like] religious stuff [and] candles,” Ursula said. “I played a lot of it with my girlfriend, but I usually would opt for anyone I hadn’t seen before or any animal or prominent fruit as they felt distinctive,” Adelaide said. Edith played with their wife, whose approach was “noting unusual items we haven’t clicked before.” “First, I picked whatever was most obvious on screen, like the fruit baskets and masks,” Zachary said. 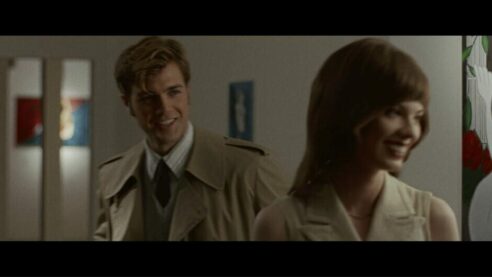 But the majority of people who shared with me were clicking on people first. George focused on “finding all the scenes with Antonio or something,” one character or object at a time, while “poking around the edges to see what comes up, like clicking chairs or clapboards or glasses of water or something” – something they say comes with experience when playing Sam Barlow games. “Early on I remember mainly focusing on people’s faces, especially if I saw a new character or a person behaving strangely,” Helena said.

Many focused on clicking the main characters. “For the first hour or so, I clicked on characters to get an idea of who they were and their context in the story,” Cyril said. “I thought maybe clicking [e.g.] Marissa smiling would bring me to another smiling Marissa, but soon realized it was all a bit more conceptual than that,” Ralph said. “If a character piqued my interest I’d try to find more about them,” Lawrence said.

“My wife pointed out that sometimes I went to a different scene depending on what context the person was in, or even what body part,” Bruno said. “I realized I should try clicking on more stuff than just faces.” Oliver had to work to unlock “one final scene from Minsky, which only included Marissa. I clicked on her face for about 2 hours straight. I was pretty elated when that scene finally popped!” The clips do become quite a long tail. “I felt that as the possibility space of unlocking something ‘new’ reduced, the limitations of the system became more frustrating,” Noel said. “I would spam Marissa or the clapboard to try and unlock new segments.”

Others got sidetracked, or sought out smaller roles. “I followed Marissa for a while, just because that seemed natural, but then I would get interested in a side character and see all of their scenes,” Katharine said. “At first, I would mainly just click on whatever interesting was in frame whenever a scene ended, particularly if there were side actors or crew that were more likely to appear in less scenes,” Stephen said. Declan “prioritized people who weren’t the main cast to begin with,” because they found the main character scenes were more likely to form a loop.

I posed a similar question to Barlow directly. “You’re asking how I play my own game which is a tricky question to ask!” he said. “I have a sense of how people play things from tests and previous games, so often when I’m testing I will replicate that – people like characters [and] faces and so will often start there. Especially if you want to explore a specific slice of a movie, you can focus on a side character who you know is part of that storyline.

“Then I might fixate on certain symbols, or key objects that jump out to me, a flower or a letter, say, – and sometimes I will just be perverse and click on something very incidental, a coffee cup or a stool. If I’m trying to fill in a blank or reach a specific scene, I will start to think tangentially and figure out if there is a person or object that is going to recur there and give me a convenient route in. If I want to get exhaustive I’ll hit up the dependable backbone of the production and start clicking on camera assistants!”

His comments parallel how people told me they were really playing the game – it’s validating after watching my historian friend click on just chairs for 10 minutes, which did unlock an important audition scene. I wasn’t organized at all in my approach, and I loved watching the actors layer multiple levels of performance into single scenes. Some shots are more workmanlike in service of the plot, but others are gorgeous: minutes-long closeups; rich exterior compositions; natural-seeming “off the cuff” scenes.

Drawing people’s attention using design is a fraught subject in the internet age. Sites like Hot or Not? changed the way our brains work online, while the invention of pop-up and banner advertisements helped to monetize those rapid page changes. But Immortality combines classic-looking, seamless cinematography with the interactivity of a traditional point-and-click game; and for the first time in a long time, I wanted to know what everyone was looking at.