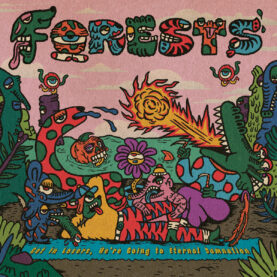 Forests: Get In Losers, We’re Going to Eternal Damnation
This trio from Singapore has enough single-coil jangle to soundtrack a century of break-up tiktoks. My patience for finger-picking fireworks depends almost entirely on how taut the background BPMs are, and Forests are keeping some real tension on the line. It’s celebration emo though, refusing to wallow or wander from song to song, keeping each meticulously wound in terms of structure but still just raw and ragged enough so as to feel chained to a Capitol Records high-dollar producer. Because sometimes these bands are too skilled, feels like they’re just slumming it on this side of punk until they can all crack off and produce for the hitmakers or show off their beat-programming skills. Forests play with grit though, and a sense of humor to dull any accusations of self-seriousness, as if obvious from a title like Get In Losers, We’re Going to Eternal Damnation. They’ve already outpaced obscurity but hopefully they can grind out a few more albums before they suffer the fate of all emo bands. 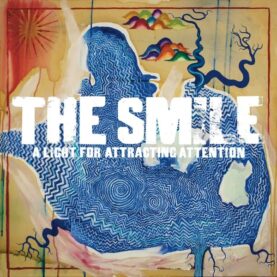 The Smile: A Light for Attracting Attention
I think a lot about the limitations on creativity. Can that energy be recharged like a battery, or are folks born with a reserve that they spend throughout their life? Probably changes from person to person, from year to minute, fighting the tide of one project dropping, same as the last thirty or even one. You probably know who the players behind The Smile are, or at least 2/3rds of them, but maybe you don’t, which would be a plum little way of stumbling across this album. It shifts and swirls like a tidepool, but at the same time feels like a full-band effort at fully self-contained songs. The kind of microcosms that Radiohead has been oscillating out from for the bulk of their career at this point. “A Light for Attracting Attention” isn’t a regression in this way, I’m not sure it’s possible for these musicians to regress, rather it’s a return to core instrumentation with elevated dalliances, a surprising amount of “motherfuckers” and another case for jazz drummers expanding the consciousness of rock n roll. In the end creativity serves a personal impulse and measurement of innovation, and The Smile serves only to satisfy themselves. Luckily we are allowed a peek. 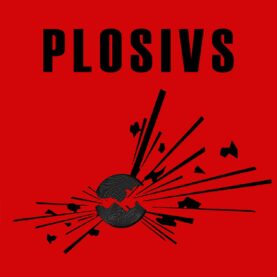 Plosivs: Plosivs
Summer was never my favorite season, even before we noticed that we were the frogs in the pot. But Plosivs, which reunites (in a way) guitar savant John Reis with indie statesman Rob Crow, has me praying for it. The first songs I heard from this album left me thirsty, but I always give Reis extra spins with what he’s involved in, and I’m glad I did. Something about hearing these songs lined up really slakes one’s hydration for riffs and crooning cut complete with heavy drumsticks and false stumbles. Rarely in 4/4 time but still inhabiting a 4/4 state of mind, these are just perfectly squeezed songs that writhe all over each other. Pinback never really set me on fire but clearly I owe Crow as many chances as I dole out to Reis, because he really delivers a complimentary sweetness to Reis’s overdriven acidity. Despite a soft pass on first listen the album at large keeps creeping in and I suspect it will continue to do so until summer is all we have left. 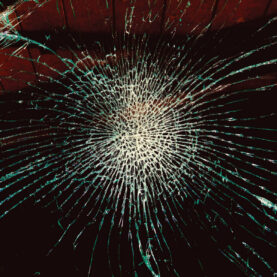 Blind Girls: The Weight of Everything
Between Zegema Beach Records, Tomb Tree Tapes, Dog Knights and all the other cassette-labels and imprints of imprints, it’s a real screamo smorgasbord out there. It’s too much for me despite the fact that I am regularly scooping it up, but I’m at the point once again where I must be a little more discerning. One of the more recent survivors of my slotted spoon are Blind Girls, a band from the Queen’s continental prison that’s been kicking up dust for a decade at least. I don’t know much more than that and I don’t need to: this record is clear without being clean, utilizing the best elements of the genre without devolving into unkempt sassiness or boombox production. Which is to say that it’s very sonically listenable, but you must still make comfort out of lockstep guitarlines and phlegm-wrapping howls as a way to exorcise extreme pain. This isn’t to paint a picture of punishment, but catharsis and healing, as per screamo’s foundational texts, but in a more elegant and civilized way, using methods building on punk and emo and hardcore and all the rest and then smashing the atoms all together. Long live Blind Girls, and long live screamo, I will keep up until the very last squall of feedback.

Realism, Reality and the Real