This is a reprint of the letter from the editor in Unwinnable Weekly Issue Forty – check out the excerpts at the end of the post. You can buy Issue Forty individually now, or purchase a one-month subscription to make sure you never miss an issue! 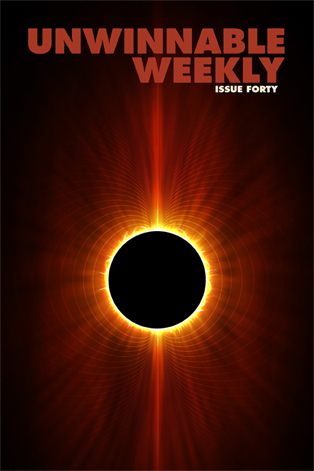 Today, I woke up thinking about Anton Maiden.

Sang is, perhaps, a strong word. The charm of Anton’s songs, and what would eventually lead him to become one of the first examples of an internet celebrity in 1999, is his terrible singing. I mean, truly awful. I have never heard someone sing so much and be so astoundingly flat.

Your first reaction when you hear Anton’s Iron Maiden covers is to laugh. It has been so long since I first heard them, I can’t remember what sort of laugh passed my lips. I hope it was one of amazement, perhaps disbelief, but it was probably mean-spirited, mocking laughter.

In an interview with a Swedish newspaper Expressen, Anton said that Iron Maiden fans, “think that my interpretations are a disgrace to Iron Maiden. But that was never my intent.” This being the internet, I can’t imagine how those Iron Maiden fans inflicted that opinion on Anton.

They were wrong, of course. Anton honored Iron Maiden. His love of their music was so strong, so uncritical, so overflowing…it doesn’t matter that he couldn’t sing with even a fraction of Bruce Dickinson’s talent. It matters that he threw himself into that music in his entirety. Aesthetic concepts of good and bad are meaningless here – it is the doing that counts. Alone, unpretentious, fervent – Anton’s blazing love for Maiden is one of the greatest tributes any fan has given any band.

After releasing one CD, Anton Gustafsson cut short his career as an internet celebrity and removed all mention of Anton Maiden from his personal website. He focused on his passion for travelling, circling the globe and spending months at a time in Asia and the Middle East, often without guidebooks.

No one has any way of knowing why Anton did that, but I don’t imagine his treatment at the hands of zealous Iron Maiden fans helped. I can’t imagine how much that hurt – to have been harassed and bullied and made fun of by the people who should have appreciated it the most.

I saddens me, too, that the internet didn’t learn, that it has gotten worse, that is has become so cold and filled with anger. I fear for the next Anton Maiden.

Sorry to be a bummer.

This week’s cover story is given over to Luke Pullen’s look at the old strategy game Emperor of the Fading Suns. Alec Kubas-Meyer philosophizes about review ratings. I share another set of toy photographs. Finally, Leo Johnson gives a southerner’s take on Southern Bastards, the brutal image comic by Jason Aaron and Jason Latour.

Tomorrow is Geek Flea 9, so if you are in the North Jersey/NYC area, definitely come down and hang out for that.

Jeeze, OK, I gotta go set up. See you next week! Holler if you need me at
stuhorvath@unwinnable.com.

A Dark Age of Infinite Scope