Interfacing in the millennium.

Welcome in, new friend. How are you doing? How have you been? I’m fine, I believe, considering circumstances both historical and international, but there’s a strange feeling in the air. Have you also found yourself transforming into a habitual overthinker? Do your fingers flutter, like mine, at the slightest stimulation? What is the current state of your Netflix queue? We have so much to talk about.

It is becoming more and more challenging to consume art, to use the current crass colloquialism. We just know too much. I wait a week for the new episode of a television show, then spend half of it subconsciously weighing if a fan theory posed by a teenager I don’t know on Twitter could possibly be viable even though my gut said it was mostly stupid. I watch a tremendous movie, an artistic endeavor, unable to shake a chill that lasted since I googled it earlier that day and learned that the poisoned shooting location killed the lead actor, the director, and his wife. I itch for some sort of deprivation chamber, where I could be truly alone with the thing in front of me — or at least for the sterile, nostalgic falsehood of the evening news, a place where new knowledge was handed forth, in a neat little package, and then left to settle for the next twenty-four hours. Instead, I am here, in-between shifts at my retail job during the third year of a global pandemic, keeping up with discourse.

It’s hard not to woe-is-me about the unique predicament of having unfettered access to infinite stimulation in the post-millennium. I can’t imagine any participant in the last hundred years of human history didn’t feel similarly overwhelmed. Modernization marches on; technology evolves; my phone software updates. The human condition stays mostly the same — we’re little and confused.

The kicker here, of course, is that there is no cure to the new disease, no reset button to bring us back to a blank white page. You learn and you learn and you learn. By this point, Sherlock Holmes’ attic theory has been well disproven. You clicked on that trending topic, you dipshit: you know. And even if there was a magical mystery button somewhere, a way back to the innocent, vacuous alive state of our ancestors, we wouldn’t take it. We’re addicted to the churn of it; we want to know what’s happening; we don’t want to be alone. FOMO, as I have been reliably informed the kids say. 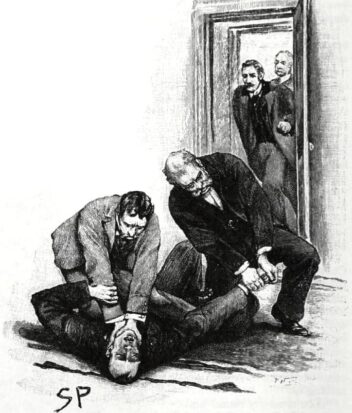 But it’s not all bad. How could it be? We live in an era of ill-gotten and ill-delivered abundance. If you have the five bucks and the internet connection to read this column, you’ve got it all: the search engines, the social medias, the Wikipedias and Discords and term-search-plus-Reddits that keep us all chewing. There is a genuine, material good done in our stretched-thin society when the everyman is able to do his own research and follow her own interests and learn about the world independently and freely. There’s no way to argue otherwise without sounding like, at best, a luddite, and at worst some sort of cartoon villain who just invested heavily in one-room schoolhouses. Knowledge is power. We’ve got a lot of it right now.

What I (we) (the collective) have yet to come to terms with, and what I believe is a key aspect of the horror of being alive in the 21st century, is that not all knowledge is created equal. It’s not the “Self-Help/Business/Leadership” dividing line of productive vs. unproductive, either – there is plenty of knowledge that is enriching and engaging without being particularly useful. It’s more that a lot of stuff we know – a lot of stuff we find out about, to emphasize the receptive position through which a lot of us scroll social media – is just . . . empty calories. Content intake with no particular nutritional value, that we pick up and chew and digest because it’s in front of us. And it’s that tasteless filler, that Styrofoam-pellet breakfast cereal, that makes it so hard for us to really sink our teeth into the good stuff: our mouth is full of all this other shit.

Here’s the solution I have approximated thus far. I cast my net wide – geographically, chronologically, artistically – out of some desperate hope to find something pure, untainted, so obnoxiously obscure that no one I could ever have met over the course of my life will have heard a single thing about it. I build a dark tent around myself and my prize, and I don’t bring my phone into it. I set the table for the meal.

And then, as it goes, I read the Wikipedia page. I pester my friends incessantly to partake, because I’m a talker. I watch the special features, and if that’s not a possibility, I get the gist from early-aughts forum posters online. I have been known to buy a book. I do my damnedest – I really, truly, try my best – to thoroughly ruin it for myself.

Then I pick the packing peanuts out of my teeth and go watch whatever people on the Internet are watching.

I hope you’ll join me.

Game Guides vs. The SEO Grind: Who Wins and Loses?