In 1993’s True Romance (written, but not directed, by Quentin Tarantino), Christian Slater watches a Sonny Chiba triple-feature consisting of The Street Fighter, Return of the Street Fighter, and Sister Street Fighter, all of which came out in 1974. This is not directly germane to the topic at hand, but I feel like it gives you a kind of point of reference before we dive into this bizarre trilogy-plus-one of films.

First, though, let’s go over my bona fides: I have never actually seen the first two films in that triple-feature, and prior to sitting down with this collection from Arrow Video, I had never seen any of the Sister Street Fighter movies. So, take everything I’m about to write as coming from a layperson. Die hard fans will likely spend a lot of time shaking their heads at my ignorance.

While I’ve watched a lot of films from Japan, they tend to more often be in the horror and tokusatsu genres than the yakuza, pinky violence and other exploitation categories that were being released by companies like Toei and finding their way to American grindhouse cinemas in the 1970s.

(For example, while I had never seen these films, I had seen Teruo Ishii’s Horrors of Malformed Men, on which he shares a screenwriting credit with Masahiro Kakefuda, who also worked on the screenplays for the first three Sister Street Fighter movies.) 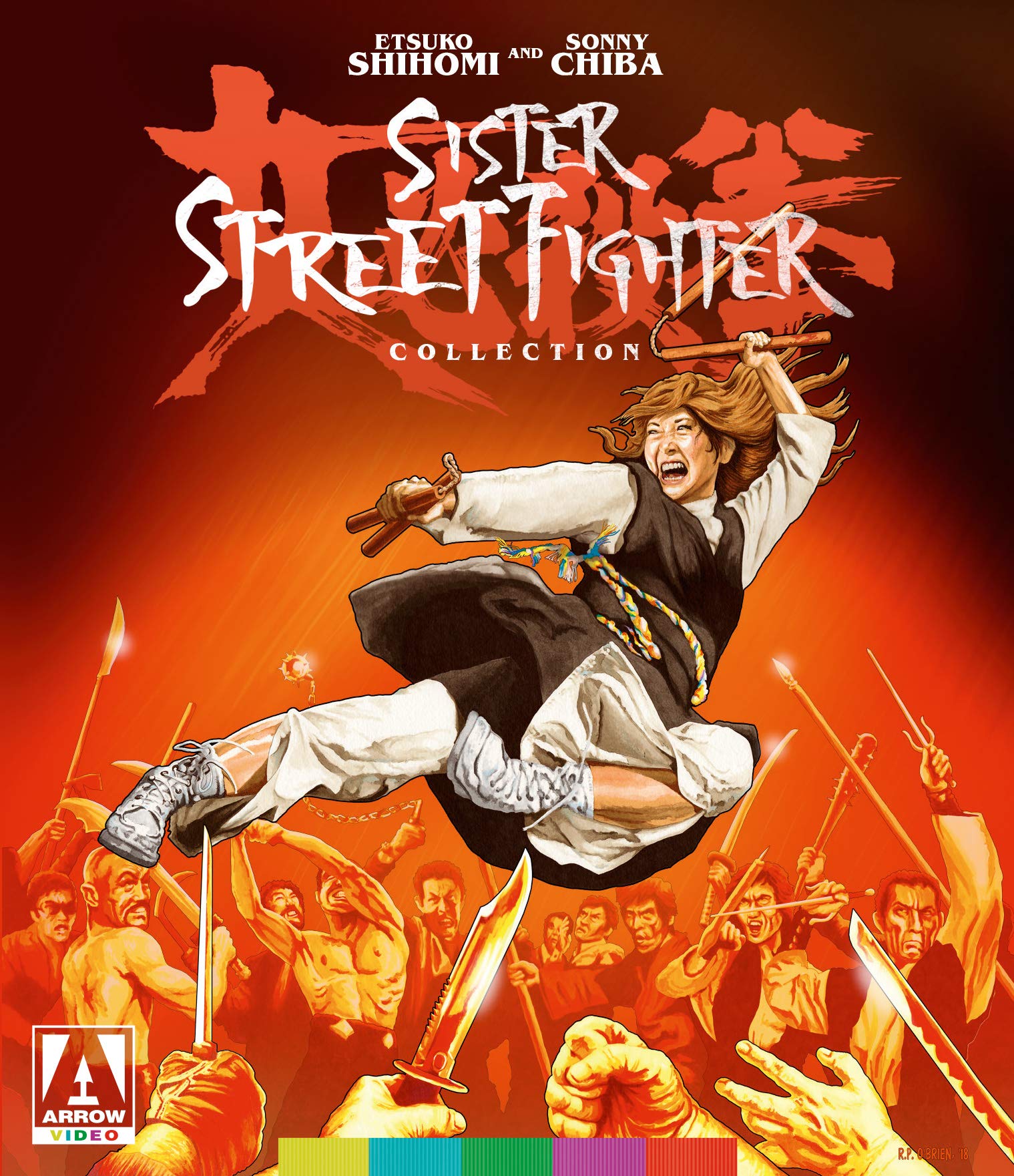 I have, of course, seen Enter the Dragon, which came out just a year before Sister Street Fighter, and so, obviously, had the people who made these films. There are elements of Enter the Dragon running throughout the series, from the villain’s basement caves (where he smuggles heroin in wigs) and claw weapon in the first film to a lead bad guy with a false hand (this time made of gold – and maybe also electrified?) in the third installment.

Sister Street Fighter is weirder, wackier and way more violent than Enter the Dragon, though. Sonny Chiba’s The Street Fighter made a splash in America when it was saddled with an X rating for its “extraordinary fight sequences.” Not one to miss an opportunity for publicity, New Line Cinema advertised the film as featuring “the first X-rated fight scenes in screen history!”

While Sister Street Fighter’s fights may not quite be X-rated material, even for 1974, they are pretty bloody, including the most gruesome variant on a guy getting his neck broken you’ve ever seen, and Sonny Chiba literally disemboweling one thug with his fingers. The film’s climactic battle also ends with a blood spray that splatters across lead actress Etsuko Shihomi’s white outfit and also the camera.

(It’s no surprise that Tarantino’s script for True Romance references these movies. You can see a lot of his signatures here, from the blood spatter on the lens to the music to freeze frames whenever a new bad guy is introduced, telling us their name and fighting style.)

Nowhere is this more apparent than in the numerous bad guys who populate the series. In each of the first three Sister Street Fighter movies, Shihomi’s Li Koryu goes up against one kind of smuggling operation or another. The first time around, the bad guys are smuggling heroin in wigs. In Sister Street Fighter: Hanging by a Thread, they’re smuggling diamonds by surgically implanting them in women’s buttocks (you heard me). And in Return of the Sister Street Fighter they’re using acid to break down gold and then reconstitute it. (No, I don’t know if acid works that way, either.)[Editor’s note – holy crap, it does work that way]

Each of these smuggling rings is headed by a different villain who always “collects” various martial artists, practicing different styles. It is from these colorful characters that the films take their strangest traits.

The various bad guys throughout the series include the “Amazon Seven,” seven women kickboxers who dress in leopard print outfits, not to mention a guy with a mohawk and a giant shield who fights with a blowgun, a “secret warrior who trained deep in the mountains,” a guy dressed as a priest who uses a harpoon gun, a guy with a razor blade hat, a drunk doctor with a parrot, a probably pretty racist African tribal warrior caricature and the Asian Danny Trejo, to name just a few.

On Letterboxd, user Carlofornia Raisin compares Sister Street Fighter to Adam West’s Batman TV series, and in some ways that’s not far off.

These are the kinds of films where a fight can happen around a naked body strapped to a glass table, where the boss’s mistress can be tortured by being burned while standing on blocks of ice, and where every installment features at least one sequence in a strip club. But they’re also the kinds of films where the villain’s underground lair features a passageway filled with cobwebs and rubber bats, where a guy stores secret microfilm in his glass eye, and where suitably dramatic battles will suddenly transport themselves to craggy rocks above breaking waves.

Though it may be Sonny Chiba’s name that gets top billing on the first poster, the not-so-secret weapon of the Sister Street Fighter series is its star, Etsuko Shihomi. A fan of Sonny Chiba, Shihomi enrolled in his Japan Action Club training school, which trained would-be actors in martial arts and how to perform stunts. Toei wanted a female action star to headline a new series and, at only 18 years old, Shihomi was picked from the ranks of the JAC by Chiba’s own recommendation.

Prior to taking the lead in Sister Street Fighter, Shihomi had already appeared in a handful of films alongside Chiba. He also shows up in the first Sister Street Fighter to help Shihomi launch her own franchise, though he’s notably absent from any of the follow-ups, his spot taken by Yasuaki Kurata, who would play essentially the same character with two different names in Hanging by a Thread and Return of the Sister Street Fighter.

These movies belong to Shihomi, though. “I want to be the first all-around female action star in Japan,” Shihomi is quoted as saying in the booklet that accompanies the Arrow Video Blu-ray set. According to that same booklet, she remains the only one, to this day, a claim I haven’t independently verified, but they should probably know. Watching the films, it’s easy to see why.

Shihomi is a skilled fighter, certainly, but that’s only a part of it. She also brings a joy to her roles that is infectious. While her acting chops improve as the series goes on, even in the earliest features, when she seems like she is struggling not to smile during scenes that are supposed to be serious, it’s obvious that she’s so happy to be doing what she’s doing that the audience can’t help but cheer Koryu on and want her to win. Which, of course, she does.

Perhaps the most notable thing about the Sister Street Fighter series, though, is the fact that Shihomi is never sexualized or objectified. In fact, in the first three films, her gender never really comes into play at all. While the normal sexual exploitation elements of pinky violence films are going on all around her (including one scene in Hanging by a Thread that features a photo on the wall that looks distressingly like child pornography), Koryu, along with the various other female martial artists who show up throughout the series, is always depicted simply as a fighter, no different than her male counterparts.

She never wears anything half so skimpy as what she’s decked out in on the American poster for the first film, which features art by comics legend Neal Adams. She never resorts to “feminine wiles” to win the day and the bad guys never underestimate her or treat her as if she’s any less of a threat than she is.

This would all be a rare thing in a movie from 2019. In a film series that kicked off in Japan in 1974, it’s rarer still. It’s almost as if the folks at Toei knew what they had in Shihomi, whose smiling face made her the best-selling idol in the Japanese collectible picture market for years, according to a Shihomi biography written by Patrick Macias and included in the booklet that accompanies the Blu-ray.

But there are four movies in this set, and the fourth, misleadingly titled Sister Street Fighter: Fifth Level Fist, offers something very different from the films that have come before it. The first three Sister Street Fighter films follow a pretty predictable pattern – opening in Hong Kong before following Koryu to Japan where she foils a smuggling operation decked out with plenty of colorful martial artists – and the second even ends on almost literally the exact same note as the first.

Fifth Level Fist, however, is a sequel in name only. Shihomi comes back, along with a few other familiar faces, including Mitchi Love, who plays the second of two different characters named Michi in the series, but all the characters are changed and director Shigehiro Ozawa, who is new to the series but previously directed the original Sonny Chiba Street Fighter film, seems to be set on making something very different.

Gone are (most of) the  comic bookish exploitation elements of the previous installments, replaced by a movie that veers between almost slapstick comedy and striking tragedy. Gone also is Shihomi’s Kuryo, replaced by a character who is still a skilled martial artist, but whose femininity is much more front-and-center, including a potential love interest character chiding her that “men are attracted to a woman’s gentleness.”

Seen entirely on its own merits, Fifth Level Fist would almost certainly be a fine enough crime movie buffered by some lengthy fight sequences. Viewed after a marathon screening of the rest of the Sister Street Fighter films, however, it can’t help but pale by comparison, even if it does literally involve Shihomi’s character being tied by the bad guys to an actual giant log headed toward a lumber saw at one point.

The easiest example to illustrate how far Fifth Level Fist varies from those movies that have come before it is in the film’s nightclub scenes. Where all of the previous installments in the Sister Street Fighter franchise featured sequences shot in strip clubs (including one with an artsy diamond effect in the diamond-smuggling installment), Fifth Level Fist’s obligatory nightclub scenes feature a sad, slow love song, a fully-clothed fan dance, and a sequence of two (fully clothed) women playing the drums.

Yet for all that Fifth Level Fist seems less exploitative than its predecessors, it also seems less progressive in its treatment of Shihomi’s character. A mixed bag, to be sure.

Maybe the most striking thing about Fifth Level Fist – besides just how different it is – is that this time around the bad guys are using a movie studio (where a samurai movie is being filmed) as a front for their drug smuggling operation. The locations used are those of Toei’s own Kyoto studios. Is this subtle satire on the part of director Shigehiro Ozawa, or simple convenience? Watch the movies – assuming you’ve got a tolerance for bloody fights, zany bad guys and some sexploitation stuff – and judge for yourself!

Looking Ahead to Panzer Paladin as it Looks Back