Rising of the Shield Hero does its level best to put a new twist on the hero’s journey. This is not meant as a compliment, mind you, because the twist they’re attempting to enact largely boils down to, “What if our teenage protagonist never had to grow into a better person because they were right all along, and that entitles them to be as awful as they want for the rest of their life?”

Rising of the Shield Hero follows the story of Naofumi, a normal boy from a normal world. One day he picks up a book at a shop and suddenly finds himself transported into another world, where magic exists. Naofumi is soon informed that he’s destined to be one of the four Cardinal Heroes, warriors who are each granted access to one ancient weapon (shield, bow, spear, sword) that will be their exclusive means of fighting and saving the world.  While initially excited, Naofumi soon finds himself suffering one misfortune after another.

He’s treated as a second-class hero right from the get-go for mysterious reasons, suffers a false rape accusation (ick) and is quickly reduced to a social pariah that not even the other heroes want to touch.  And because he can only wield a shield, there’s no real way for him to fight monsters and level up (because yes, this isekai has a lackluster combat/magic system that’s just a basic MMORPG setup of “gain XP then fill out skill tree,” and no, the writers have never heard how lethal bashing someone’s head in with a shield can be).  Naofumi soon gives into resentment towards his predicament and tries to eke out a living on the fringe of society.  If this were a better series, Naofumi would eventually find some way to rise above this adversity, make allies along his personal hero’s journey, and eventually rebuild his reputation to become a true hero.

Instead, Naofumi buys a child slave to fight his battles for him. 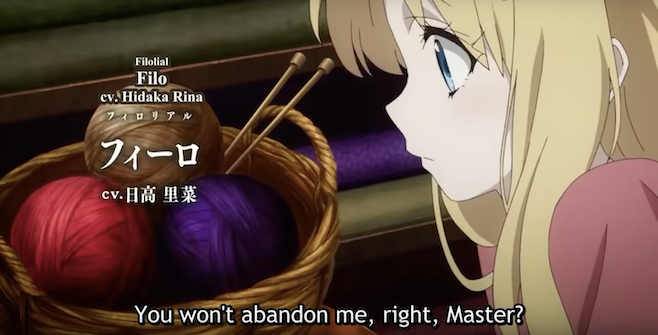 One of the biggest sins of Rising of the Shield Hero (and there are many) is a central story tenet that slavery can actually be a good thing, provided you’re a good owner.  Naofumi purchases a weak, sickly demi-human child (think catboys but with more species) because she’s the cheapest individual he can buy at market. Rising of the Shield Hero sincerely put more thought into the system of controlling an enslaved person than anyone should be comfortable with, utilizing a magic seal so that people under a slave owner’s control can never lie and must obey whatever commands they’re given, at risk of suffering untold physical agony.  The child Naofumi purchases, Raphtalia, is emotionally scarred after not only watching her parents die horribly during an inter-dimensional monster invasion, but then experiencing her whole village being attacked and enslaved by human supremacists.  She’s sick, and frightened, and a little girl. Naturally, Naofumi outfits her with the cheapest knife he can buy and orders her to slaughter wave after wave of monsters until they’re both sufficiently leveled up, by virtue of party XP share.  And this is painted as a positive.

Isekai stories love the concept of people coming together in adventuring parties and growing stronger by tackling adversity head-on. But there is a marked difference between a person facing their fears of their own volition, and someone being forced to ignore their own completely rational concerns of dying horribly because they’ll be magically tortured otherwise. The viewers are supposed to find it heartwarming when Naofumi promises to defend Raphtalia and even gets injured protecting her; but how can you look at a scene like that and say anything other than, “well who put her there in the first place?!”

Honestly, I could write a whole article about why “slavery = secretly good” is an abhorrent take and reason enough to give the whole show a wide berth. But the longer I watched the anime (and I watched it for way too long), the more obvious it became that their pro-slavery was just one facet of a story that promises its viewers the worst kind of Neverland for teenage boys.

The only two permanent members of Naofumi’s party in season 1 are both enslaved women, and neither of them are human. There’s Raphtalia, a tanuki demi-human who magically ages up into a young adult once she hits a certain level, and Filo, a sentient beast of burden/giant chicken who spends half her time in the body of a tiny blonde girl. Both of them insist on an uncomfortable number of occasions that they’re happiest being enslaved under Naofumi’s control, to the point where Raphtalia demands her slave crest restored when it’s magically removed. To make things worse, what they’re insisting on is that they’ve grown stronger because of Naofumi’s manipulations, and they enjoy being used as his tools and would happily do so forevermore.

Raphtalia declares herself to be Naofumi’s sword, while Filo is happiest as a beast of burden, pulling around the wagon that carries the other party members. The picture this paints is one where Naofumi cannot form a relationship with other people based on trust, and only gets close to those he can exercise absolute control over. Furthermore, the people he grows closest with aren’t considered humans with full rights in this kingdom, so you have the added issue of Naofumi having to defend his “uncivilized” property from the darkest parts of society. Of course the show tries to paint him as a “good master” who’d never force the girls to do anything he doesn’t want, and then follows it up with scenes like Naofumi getting tired of looking for Filo and demanding her to come out so he can find her by following her screams of pain. Naofumi does not have a party of friends, but rather a band of sub-human pawns meant to be used as he sees fit. Even on the rare occasion a non-enslaved adventurer joins the group, it’s clear that their addition is only meant to be temporary, and even then there has to be a clear reason they’re submissively turning to Naofumi for protection. 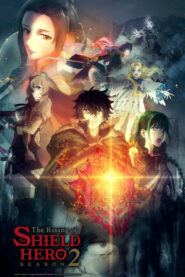 Outside of Rapatalia and Filo, Naofumi by and large has given up on the world at large. He’s short and snappish, begrudgingly completes whatever heroic tasks might come his way (oftentimes cleaning up after the other, more popular Cardinal Heroes) and denying his role as a hero. Naturally, the women in his group have to take up the emotional labor of smoothing things over with villagers as they insist Naofumi is actually a good guy deep down, and they’ll be happy to help save the day. As a result, Naofumi continues to be an absolute prick to everyone he meets, only (slightly) softening up to whatever chosen few he deigns to form a working relationship with. The rest of the world, be they hero or king, will be met with scorn and acerbic commentary that reek of the revenge fantasy of a spineless teenager who never had the nerve and wherewithal to stand up to a single authority figure in his life. And the worst part is, Naofumi is proven right.

The climax of season 1 (and I’m going to spoil it with reckless aplomb, anything to keep you people from watching this show) occurs when the Queen returns from abroad and exposes the lies of her husband and eldest daughter, the latter of whom fabricated the false rape story mentioned above. Because Rising of the Shield Hero cannot let go of how beneficial slavery can be under proper circumstances, the princess is bound with a slave crest and made to confess her lies on fantasy Judge Judy, broadcast live across the kingdom. Eventually every lie told about Naofumi is laid out, his reputation is cleared, and the chief liars are sentenced to death.  EXCEPT.

Naofumi is, at his core, an immature and incapable teenager. Despite his deep-seated resentment towards these people, he doesn’t have the stones to see any meaningful punishment carried out against them. And so on the day of their execution for high treason that caused thousands of unnecessary deaths, he insists on mercy and merely has them stripped of their titles, with the added insult that the king will only be called “Trash” going ahead, whereas the former princess will only be referred to as “Bitch” or “Slut” in the kingdom. Cringe. Pure cringe.

Shame on me though, I stuck through the show until partway through season 2, when it became painfully clear that there was to be no character growth, no improvement in writing, not even a passing hint that slavery is an abhorrent practice that ought to be scrubbed from the world with extreme prejudice. Naofumi gains a new party member (another woman who insists on being made into his slave) and continues to act only in favor of the people who matter to him, not the world at large. The plot turns into characters jumping from one Big Bad to the next, all of whom are bland and obnoxious more than threatening. I blame this on the fact that any villain with deep-seated hatred towards the world with the brains and means to cause widespread harm would just be a Naofumi doppelganger, and efforts to make a true foil to the Shield Hero would only create a stalwart abolitionist and upstanding member of the community. And yet, this show remains highly popular.

Why wouldn’t it? Rising of the Shield Hero offers young, angry boys a protagonist who has the whole world turn against him for no good reason. It assures them they don’t have to grow or mature to be well-liked, women will flock to them and do the heavy-lifting anyway. It offers an abundance of pure, innocent heroines (because to no one’s surprise, Rising of the Shield Hero believes that any woman who displays an iota of sexuality is intending to weaponize it for personal gain) and promises that personal windfalls are destined to come their way, just for being who they are. Naofumi is their self-insert to lash out against any authority figure they can’t face in real life, their chance to scold better-liked peers who behave selfishly. It’s everything a person could want; provided you’re the type who can’t admit that the primary problem in your life is you.

Review, Rising of the Shield Hero

Body Image and Self-Loathing in Centaurworld