Centaurworld is a deeply, deeply weird cartoon.  It combines the weebly-wobbly and oddly proportioned art style of shows like Adventure Time and Steven Universe, with the lolrandom and existential dread humor of early 2000s series like Invader Zim or Don’t Hug Me I’m Scared.  It’s equally obsessed with gallows humor as butts, and on first watch the overall oddness can be a pretty high threshold to leap over.  But the further you get into the show, the more your attention shifts towards Centaurworld’s messages of love, found family, and acceptance.  Particularly, I adored Centaurworld’s surprisingly blunt and sharp dive into the dangers and weight of unaddressed self-loathing.

Centaurworld centers around Horse, who is a horse, as the name implies.  More specifically, she is a battle-hardened warhorse who takes great pride in having assisted in the slaughter of countless bloodthirsty minotaurs and kept her beloved human, Rider, safe through a war of humans versus beasts.  However, thanks to magical shenanigans she’s currently found herself transported into the colorful, bouncy, and nonsensical Centaurworld, where magic is as commonplace as sporadic musical numbers.  It’s nothing like the world Horse has come from, and she hates it right from the get-go.  Desperate to escape and return to Rider, she reluctantly allies with the first centaurs she happens upon, in order to reach a magic rift at the far end of Centaurworld.  And as these stories often go, the journey will change her forever.

I don’t mean change in the usual kids movie sense of the word, wherein the protagonist experiences the positive sort of internal growth that makes them a stronger and more likable character (although Horse does get that, to some extent).  Her alterations, while whimsical on the surface, are by and large deeply distressing.  The magic of Centaurworld progressively mutates Horse’s appearance, making her less a sleek war machine and more a singing, magical creature with a form described repeatedly as, “two beach balls had a weird kid.”  Often, these changes happen without warning and manifest at the worst possible times.  And Horse does not take well to this unwilling transformation of her person. 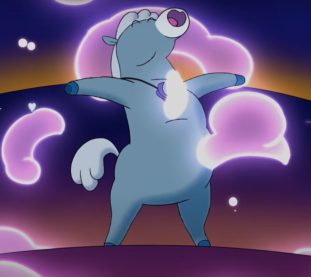 A less than majestic warrior.

Shows geared towards a younger audience like to present physical changes as a normal part of growing up that should be celebrated and wholeheartedly embraced, after the briefest instances of momentary discomfort.  Any negative developments (pimples, voice changes, etc) are often downplayed or merely played for laughs, and everything is back to normal by the end of you ~22 minute episode.  They may touch on, but rarely explore in-depth, what happens when a character is already perfectly happy with their body and abilities, and so sees their new changes as something to be dreaded and feared long-term.  Horse’s insecurities are two-fold, and equally difficult to grapple with.  Her entire life has been one battle after another, and being a warhorse is not only the core of her identity, but a title that she wears proudly.  If she no longer fits the mold of a proper warrior, what’s left for her to be?  More than that, Horse fears that the change she’s undergone is so extensive that even her only remaining family, Rider, will either fail to recognize her, or discard her for a more fitting steed.

It doesn’t matter how excited the centaurs in her group are to see these changes, or how much they reassure her that these are normal developments meant to be celebrated; Horse is upset and unhappy.  Worse still, she’s deeply in denial about her own pain (there’s a whole song about her refusing to acknowledge how sad she is) and constantly works to distract herself with the current external issue, rather than focus on her own internal strife.  The few attempts she does make to open up are ignored or dismissed, until she becomes convinced not to even bother trying.  Horse becomes so caught up in the momentum of her mission that she doesn’t take the time to properly process her emotions and grieve the body she lost, until the despair and depression drive her to an attempted suicide.  I don’t mean metaphorically, I mean the show very explicitly shows her leaping into the mouth of a giant whale, from which no one has ever, ever returned.  Of course she’s saved (she’s the main character, after all), but not before she and Wammawink, the group’s mom-friend, acknowledge Horse’s feelings and admit that her pain is absolutely valid.  It’s wonderful to see the show openly acknowledge that changes to your body aren’t always fun adventures to be explored or laughed off, particularly if they come with limitations on what you used to be able to do.

Horse does learn to adapt to her new form (though it’s worth noting that, in segments taking place in a mental plane, Horse’s self-image is often still that of her original form) and its unique abilities.  One of the biggest changes are her newly-awakened powers that allow her to get a better perspective on the issues and baggage being carried around by her centaur friends.  At this point, Horse realizes that most of them suffer from similar problems with self-image and their perceived self-worth.  Glendale is riddled with anxiety that manifests in a compulsion to steal everything that isn’t nailed down and hide it in her portal stomach (it’s a magic show, just go with it), Ched has a major chip on his shoulder over his small stature and mistreatment by bigger creatures; the list goes on.  But somehow they’ve all come to terms with their problems (admittedly, to varying degrees of success), and utilize individual coping mechanisms and their friend group support system to lead relatively functional lives.  They’re not perfect, but they’re happy.

Conversely, the main antagonist represents a person’s utter failure to either adapt or work to accept themselves.  I don’t want to spoil much, because the big reveal of the Nowhere King’s backstory comes at the tail end of season 2.  Without going into specifics, the Nowhere King became convinced that his own form was reprehensible and unfit to accomplish his goals.  But rather than try to cope or adapt, he instead began experiments to physically and/or magically carve out the parts of himself that he viewed as abhorrent.  The results were about as successful as you’re imagining. 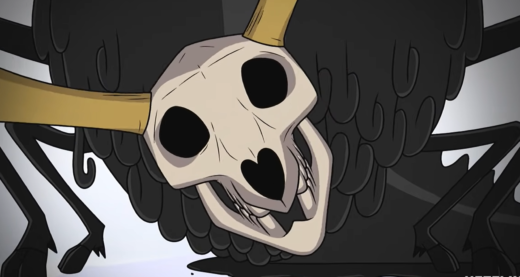 Horse is repulsed by this revelation.  “Obviously she is,” groans the audience.  “She’s the protagonist, she ought to be disgusted by the villain’s actions!” they scream.  But I need to reiterate that, if the Nowhere King’s reveal had come in the middle of season 1 instead of rounding out season 2, Horse probably would have sympathized with his choice.  Her path to accepting major changes in herself was long and rocky, and she loudly and openly feared that her appearance would be enough to close doors in her life or drive off the person she loved the most.  Horse only came to terms with her bulgey, comical form after numerous tribulations and wrestling extensively with her own insecurities.  Centaurworld is not just the story of a warrior trying to save the world, but the bumpy and often ugly path people must take when life forces unpleasant and unwanted changes upon their bodies.  These are grim, and isolating, and can drive people to drastic measures in a desperate bid to regain control.  But there’s no magic wand to wave and fix those issues.  Acceptance of the new norm takes time, and support, and a willingness to love and be comfortable with your own body, limitations and all.  As Wammawink said, life is full of pain and hardship.  But it’s still worth trying to survive.

Cyberpunk 2077 is a Haunted House