Spirit Hunter: Death Mark (stylized as simply Death Mark for the Switch) begins with our protagonist finding himself on the doorstep of an imposing, darkened mansion.  He soon realizes that he’s forgotten not only why he came to this decidedly unwelcoming manor, but also everything about himself.  He cannot recall his occupation, his age, or even his own name (leaving me with some guilt for naming him Block).  All he knows is that there is a mysterious, bite-shaped mark on his arm, and a business card for the mansion’s owner in his pocket.

He enters to find the mansion largely devoid of life, save for a living doll named Mary.  When others arrive bearing similar scars, Mary explains that the marks they carry are curses inflicted by particularly malevolent ghosts.  Each one is designed to eat away at their victim’s memories and sanity before killing them in a gruesome fashion.  Mary believes that there is only one way to break this curse: investigate the specific ghost which inflicted the mark, and find some way to exorcize them.

Death Mark is broken into a series of chapters, each one focused on a different ghost and the people who’ve been cursed by them.  Block gets a case and then choses a partner to help investigate haunted locations, such as an abandoned elementary school or suicide forest.  The duo’s goal is to gather information and items that can be used to appease or defeat vicious spirits.  Additionally, you’ll spend quite a bit of time solving puzzles to help uncover more information about the haunting.  I adored exploring because the visuals and sound design were impeccably well done.  Death Mark uses first person POV, with a room’s layout and appearance based on the direction Block is facing at the time.  Points of interest are found by shining your flashlight around a room and waiting for a glimmer of light to tell you something is interactable.  But sometimes what your light finds is a gaunt face pressed to the window that vanishes with a ghostly laugh, or a transparent apparition dangling in a noose before it fades away with a gurgling gasp.  Creaks, drips, thuds, and other sounds will go off at random, preventing you from predicting the patterns of the ghosts around you.  I nearly jumped out of my skin during a scene in a cabin that featured sporadic, increasingly frantic pounding on the walls sans text or in-game explanation for it.  When I went outside to investigate (having assumed the game was trying to funnel me towards the next plot point) there was no message or indication I’d triggered an event.  The banging served no other purpose than to make me, the player, deeply unsettled. 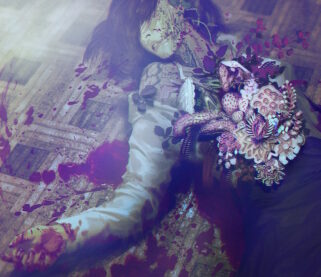 Death Mark further fleshes out its tense and unsettling atmosphere by filling your vision with  claustrophobically narrow passages or wide open (and indefensible) spaces.  Allies are silent and tucked away; you must lead the charge as the party wanders down labyrinthine hallways or sewer tunnels.  You never feel comfortable once you enter a haunt; even with a minimap, it’s hard to get familiar with the lay of the land, never mind the myriad stains and blood splatters littering the area.  It certainly doesn’t help that the art for Death Mark is gorgeously grotesque, particularly when it comes to the ghosts’ designs.  Worst of all, there can only be two of you exploring at any given time.

Mary explains early on that a greater number of souls will only attract more attention, possibly making the effects of the curse even worse.  Safety in numbers can never be an option for Block and the other Mark Bearers if they’re to defeat the curse.  And oftentimes, the allies you can bring along are children, sickly adults, or deniers of the supernatural whose mental fortitude is ill-suited for the task at hand.  Not only do you have to be the leader in saving everyone from imminent death, but you also have the heavy task of protecting your partner at all times.

On top of this, Death Mark enjoys inflicting “Live or Die” moments on the player at random intervals.  These are encounters with a ghost or some violent power that bears you ill will, and involves making timed choices.  Block has a limited amount of spiritual power that constantly ticks down during an encounter, and picking the wrong answer carves out a whole chunk of your remainder.  When the counter hits zero, you die.  Placing a timer on a multiple-choice scenario frazzles the player as they scramble to remember what they know about the ghost in question, and how that ought to guide their answers.  Truthfully, on first playthrough you are probably going to die quite a bit to these encounters.  At least Death Mark is kind enough to reload you back to the start of the encounter, keeping the “Live or Die” moments interesting (albeit tense), rather than letting them devolve into frustrating speedbumps.

Further compounding the player’s stress are the various puzzles and items scattered throughout a level.  Every object has a use, but it’s not immediately clear what function some collectibles might have.  I occasionally grew frustrated because using these items could be very roundabout.  For example, you might use an item, get told you couldn’t, then choose the “look” option to get a new text box, which now allowed you to use the item in a way you figured out 5 minutes ago.  But I never ran into a problem where I felt the end solution made no sense.  The true stressor was always the boss battles. 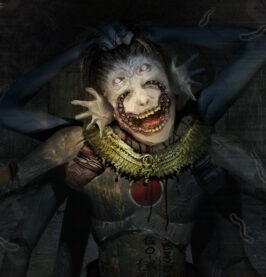 Death Mark features both “normal” endings and “good” endings, and which one you get depends entirely on the outcome of each boss battle.  Getting the good ending involves somehow finding a way to connect with the ghost’s spirit and appease it, whereas a normal ending involves simply weakening it to the point it can be defeated.  I’m going to be very honest, knowing which items to use on the boss (or not use) and in what order was an uphill challenge.  There were two bosses in particular whom I honestly do not think could have been beaten to get the “good” ending without having a guide on hand.  And considering that saves can only be made in certain locations (rather than at any given point, like immediately before the boss battle), reloading and redoing the fight in hopes of better results can be a tall order.

That’s the end goal, though.  Unless you get the happy ending with a ghost, your companion(s) will die somewhere in that ghost’s domain.  Block knows going into the haunting that these spirits are the remnants of people who themselves met terrible ends, and paid back their sufferings in bloody dividends for ages before the Mark Bearer crew arrived.  Death and despair is a given when facing off against these ghosts; the most Block can hope to do is use his wits and a bag full of items to protect the smattering of people willing to help him.

Difficulty saving, limited character sprites, and somewhat convoluted puzzles were a few minor gripes I had, but my biggest issue with Death Mark came from some ecchi scenes.  I don’t know why, but Death Mark felt the need to show several half-naked or completely bare women being captured, tortured, or killed in rather lewd and titillating positions in several chapters.  Specifically, I remember during the Hanahiko arc not understanding why members of the PTA were stripped bare before rose thorns killed them, or why in the Mrs. Zoo arc a woman had to be stripped naked before being thrown into a pit of venomous snakes.  These scenes were never so grotesque or vulgar that they ruined the visual novel for me, but I understand things like that can be a dealbreaker for some.

I sincerely loved playing every chapter of Death Mark from start to finish, including the bonus chapter you unlock by getting all the good endings in the preceding five main chapters.  I loved the horror, I loved the twisted and dark stories surrounding the ghosts and their lore, and I loved the characters who became my companions in horror and death.

Spirit Hunter: Death Mark is currently available on Playstation 4, Xbox One, PC, Nintendo Switch, and PS Vita.  There’s already one sequel out with another planned to release at some point this year.  If you enjoy atmospheric horror and puzzles, I strongly encourage you to pick up this game.